We put a phone of an up and coming smartphone brand in the cross-hairs of a crowd favorite. Infinix Mobility entered the Philippine market back in 2015 with their Hot Note since then we’ve seen a steady push from the brand. Xiaomi, on the other hand, has been a crowd favorite since they entered the market back in 2014 and is known to release competitively specced and aggressively priced phones. Let’s see how the newly released Infinix Note 4 fare against Xiaomi’s highly regarded Redmi Note 4X. 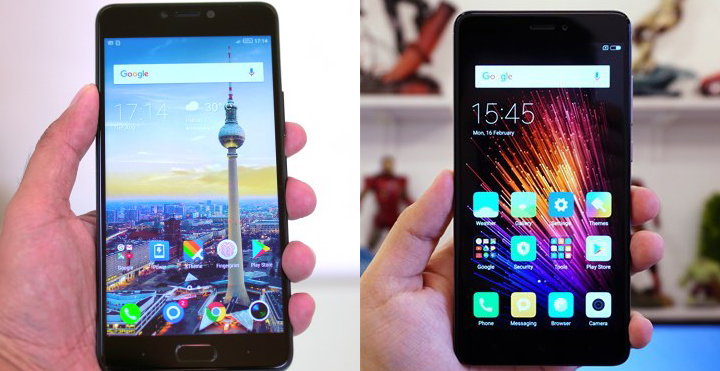 The Note 4 has a 5.7-inch Display while the Note 4X has a 5.5-inch display. Both phones have Full HD IPS screens with a resolution of 1920 x 1080. They both have good viewing angles, color reproduction, and color accuracy.

The screens are bright enough to be operated under direct sunlight. As for protection, none of them have Gorilla Glass but the two companies claim that it’s scratch resistant. While both have mono speakers that go loud, the Note 4X’s speaker produces clearer sounds and more bass than that of the Note 4. There is little noticeable distortion at max volume for both phones.

The Infinix Note 4 has a 13MP Autofocus rear camera with dual-LED flash and an 8MP fixed focus front camera with soft-LED flash. It also offers a variety of camera modes for its user’s such Professional, HDR, Beauty, Night, Panorama, PIP (Picture in Picture), Wide Selfie, and its own set of filters. The notable camera features are PIP and Wide Selfie. PIP or Picture in Picture lets you use both the rear and front cam simultaneously, with the front cam having some frame options, sadly there is no option to have no frame. Wide Selfie is essentially Panorama shot for the front cam. You can also set the settings of both the rear and front cam to have grid lines, a leveling guide, touch to capture, smile capture, and delay capture. While a unique option for the front camera is gesture control where when the camera detects a gesture it takes the shot. The Xiaomi Redmi Note 4X, on the other hand, has a 13MP rear camera with f/2.0 aperture, PDAF, dual-LED flash, and a 5MP front camera with f/2.0 aperture. It offers a variety of modes for its rear camera such as Manual, Panorama, Timer, Audio, Straighten, Beautify, HHT, HDR, Scene and a selection of filters. The notable camera features are Audio and Straighten. Audio lets you control the camera by sound, once the mic detects a loud enough sound the camera will take a shot the downside of this, however, is that it registers any loud enough sound it detects. Straighten lets you take angled shots by using a guiding rectangle. The front camera, on the other hand, has the Timer and Audio modes plus a selection of filters. Here are some sample shots from the Note 4:

And here are some sample shots from the Note 4X:

For Video, both phones max out at 1080p, 30fps. Video quality is average at best for both. Colors on the Note 4, however, are a bit washed out. The Note 4X records clearer audio than the Note 4. But still audio recording in videos for both phones is not that great.

Here is a sample video from the Note 4:

And here is a sample video from the Note 4X: The Note 4 runs on Infinix’ own XOS Chameleon V2.3 on top of Android 7.0 while the Note 4X, during our review, runs on Xiaomi’s own MIUI 8.2 on top of Android 6.0 but can be upgraded to Android 7.0 with MIUI 8.5. Xiaomi installed little bloatware on the Note 4X most of which you can uninstall. Infinix, although also installing little bloatware that can be uninstalled, has included quite a few customized apps on the Note 4. As for the features, The Note 4 has split screen functionality, infinite scroll, one-handed mode, freezer, gesture controls, and wave-to-unlock. The most interesting feature here is the freezer. It, as the name implies, freezes other apps. It’s a nifty feature to have, especially if you want to keep those pesky system apps in check. The Note 4X, on the other hand, can double as a remote through the MI remote app provided your device supports it. It has what Xiaomi calls Second Space which creates a second profile in your device with a different password and settings. It also supports one-handed mode and Dual Apps. 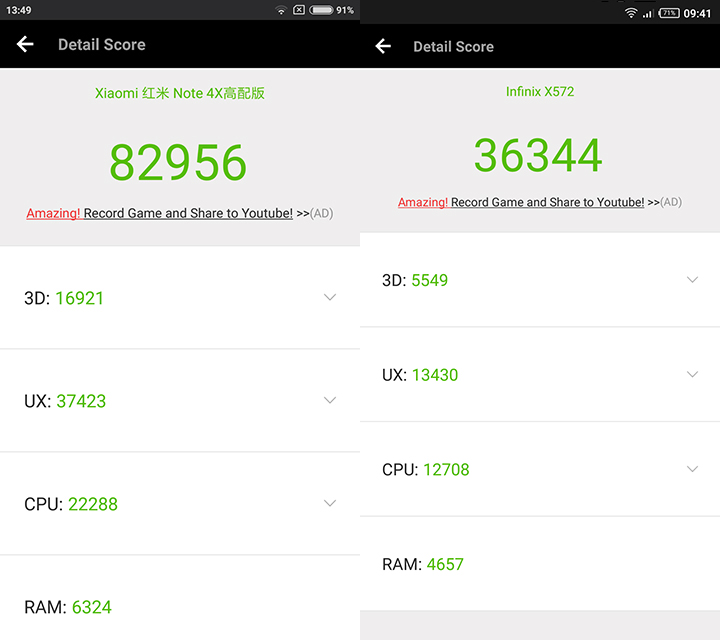 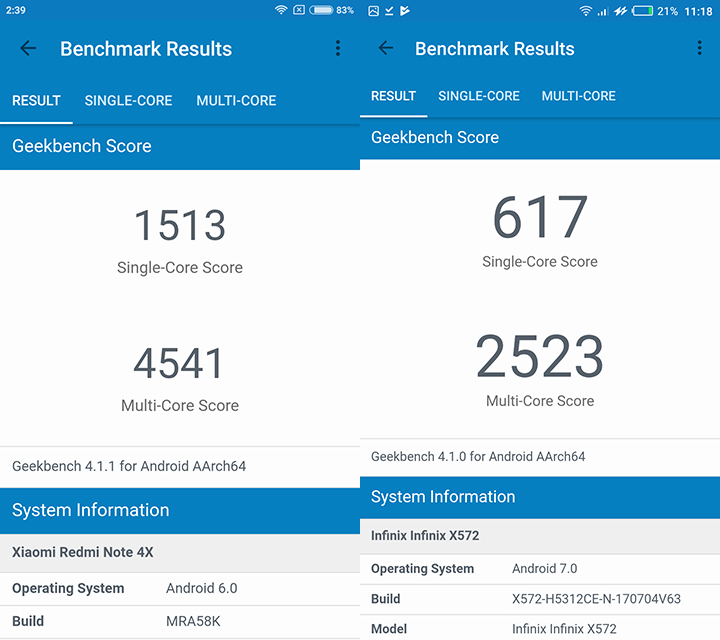 While you will feel no difference in the performance between the two at mundane tasks like browsing the web or texting once you move on to heavier tasks like gaming the gap is noticeable with the Note 4X leading the charge. While multitasking wouldn’t be an issue for both phones, the Note 4X has an advantage with its 4GB RAM over the Note 4’s 3GB.

Here are the other benchmark scores of the Note 4X and Note 4 side by side:

Call quality and signal reception on both phones are good. Basic connectivity is present as both phones have LTE, WiFi, and Bluetooth. Navigation via GPS won’t be a problem, but the Note 4X has better accuracy than the Note 4.

Here are the sensor box and GPS test results of the Note 4: And here are the sensor box and GPS results of the Note 4X: The only real difference in these phones lie in their performance and features as other aspects like the Camera, Display, and Connectivity is almost similar. In pricing, Infinix’ offering costs Php8,999 while Xiaomi’s offering costs Php 8,799(See listing here). It is certainly a question about performance or features, while the Note 4X outshines the Note 4 in specs the Note 4 makes up for it in features. Why choose the Infinix Note 4:

You meant to say “bass”? “Bass” and “base” are two different things, you know.

Oh right, i now it’s a month late but thank you for noticing that mistake.:)