LG Nexus 4 goes on pre-order ahead of launch

LG Nexus 4 goes on pre-order ahead of launch

We’ve already previewed this LG-made Nexus smartphone twice in the past. Now the same retailer, which leaked a snapshot of their inventory that includes the alleged LG Nexus 4, has displayed the smartphone on their site including the date when they’ll start shipping pre-ordered units.

Along with some introduction about the phone, Carphone Warehouse also includes a detailed spec sheet of the product which includes a quad-core Snapdragon S4 processor, 2GB of RAM, 4.7” Gorilla Glass 2-coated LCD screen with 720p resolution and an 8MP camera which is capable of shooting Full-HD clips at 30fps and.

Early rumors suggests that the upcoming Nexus 4 will only come with a measly 8GB internal storage which is exactly what was listed on the UK-based retailer’s spec sheet. To make things worse, it is speculated that there’ll be no option to expand the memory due to the lack of Micro-SD slot.

We’re not sure if this is Google’s way to cut down cost and force people to be more cloud-dependent (which unfortunately is not so ideal in countries like ours) or it could be that Carphone Warehouse didn’t list other variants (for some reason) and is just taking pre-orders for the 8GB model. We’re more inclined to believe the latter, but if the first one turns out to be true, then it’ll be a deal breaker for sure. 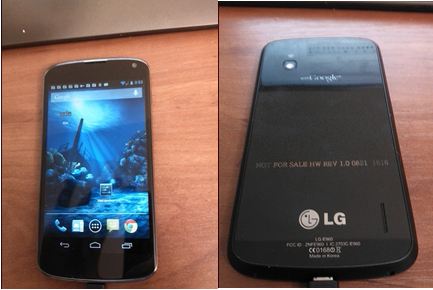 The retailer is starting to take pre-orders starting today for the LG Nexus 4 and will come free with an O2 or Vodafone contract starting at £31 and £33 respectively. Shipping starts on the 30th of this month, just a day after Google’s event which the phone is expected to be announced. This may mean that Carphone Warehouse may already have the phone with them and just waiting for a go signal from Google to release the phone.