Weâ€™ve finally got our hands on the mid-range offspring of the Nokia-Microsoft partnership, the Lumia 710. The Windows Phone powered smartphone just sits perfectly in between its entry-level sibling Lumia 610 and its high-end counterpart Lumia 800. Check out our full review after the break. 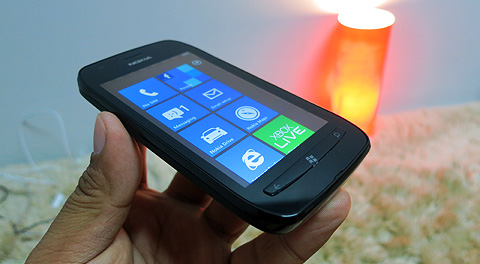 Before we proceed to the full review, its best that we check what comes with the Lumia 710. The Lumia 710 comes in a fairly large slide-out box. 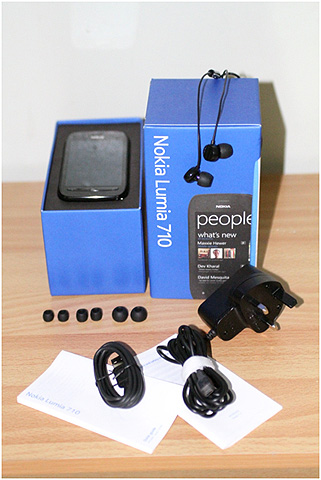 Sliding the inner box will reveal the handset resting at the top. Taking the handset out will show a case that conceals the two handbooks, the User manual and Warranty Information. Under that is where you can find the phone’s accessories which are divided accordingly by a carton divider. The Lumia 710 comes with the bare essentials, a larger than usual charger, USB cable, a 1300mAh battery and an in-ear headset. 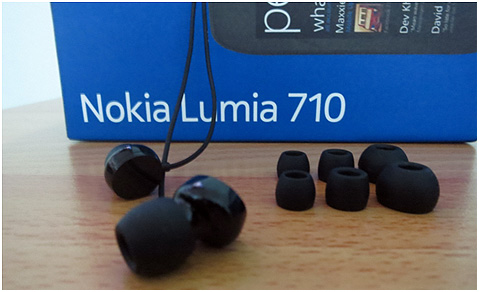 The in-ear headset is great addition to the phone’s accessory as it produces above average sound quality. Its design deeply resembles that of the Promac PRO One without the flat cables. It also comes with 3 pair of silicon tips for a more perfect ear fit. 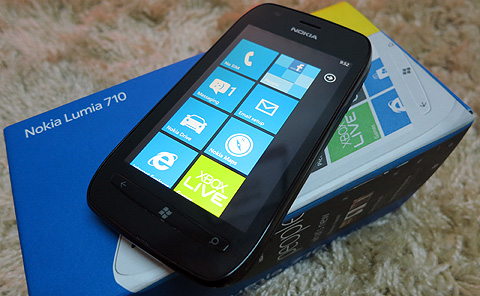 Although almost entirely made of plastic, the Lumia 710 doesnâ€™t look too cheap compared to other plasticky phone. Because of the material used, the handset is lightweight and easy in hands. The front of the phone sports a 3.7â€ screen that, as with its high-end Lumia siblings, utilizes Nokia’s ClearBlack Technology for an improved outdoor legibility.

Just below the screen is the three embossed physical buttons (Back, Home and Search) which are common to all Windows Phone operated smartphones. 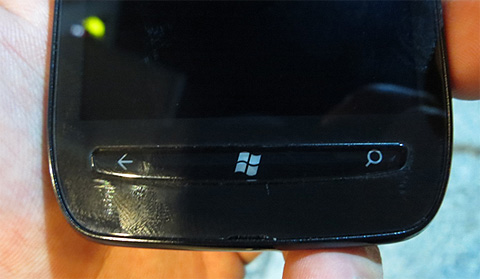 At the top of the phone, is where the power button is located along with the two exposed ports which are the 3.5mm audio jack and micro-USB port.

The volume rocker and camera key can be found on the right side of the phone. Not much going on the left and bottom of the handset besides the secure latch of the back cover on the left and eyelet hole for lace at the bottom. 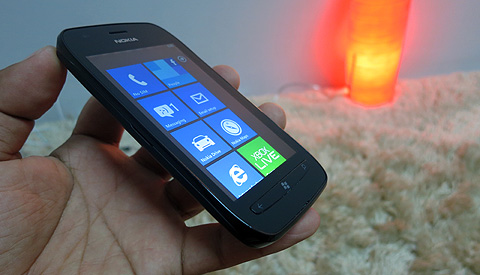 The matte finish of the replaceable back cover adds more grip and ease of handle. The back of the phone also features the 5MP camera, an LED flash and several holes for the loudspeaker. Under the cover is where the Micro SIM compartment can be found. 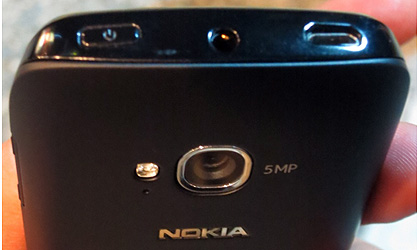 The 3.7â€ screen is just enough for comfortable typing and video playback. Texts are just the right size, colors are properly reproduced and viewing angles are decent. And with the addition of Nokia ClearBlack technology, the viewing experience is even more enhanced. The polarizing technology really lives up to its purpose as I didnâ€™t have any problems reading texts or looking at pictures even on direct sunlight. Another thing a like about this technology is that the phone doesnâ€™t have to exert too much juice to provide its user a legible display outdoors and vibrant colors indoors. 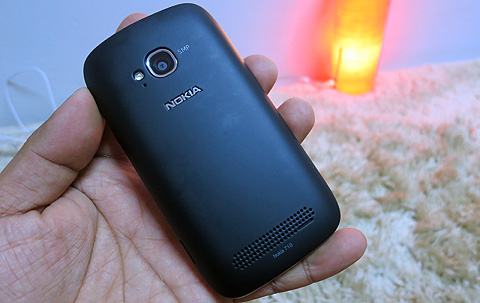 The loudspeaker of the Lumia 710 is a bit on the downside as the sound output is a little bit too soft as compared with other phone. Though not as soft as the sound output through the loudspeaker, I feel like the loudness through the audio port is a bit lacking but should suffice for casual listening. This is also the case for making and taking calls, but not to the point of the speech is inaudible. This part is a bit subjective as people donâ€™t have the same hearing, so I suggest trying it for yourself. 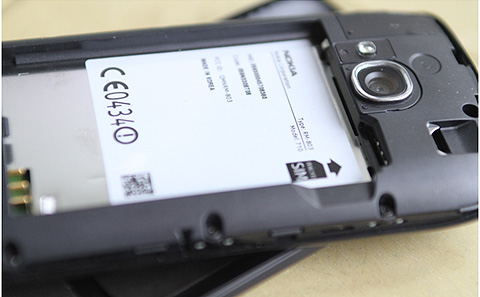 Nokia did little to alter the UI of their Windows powered Lumia line-up. From WP7’s deep SNS integration to its minimalist UI design, the Finnish company just stuck with what Mango and its Metro UI has to offer and left it untouched.

But what sets the Lumia handsets apart from other handsets running on WP7 is a handful of Nokia apps that in essence is aimed at making life easier (or so they say). 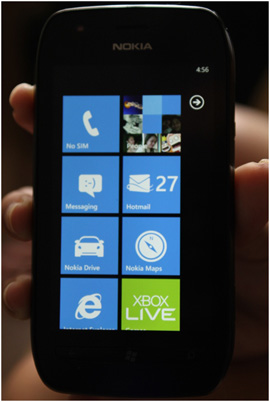 One of these apps is the Nokia Maps which is pretty much the same as the map that comes pre-installed with the OS which makes it redundant. Another is app is the WP version of the OVI Maps, coined Nokia Drive. IMO it would have been better if these two apps were just combined into one useful app as both of them serves almost the same purpose.

Transitioning from an old phone or a secondary phone can be a pain the neck, Nokia knows this and they tried to make it a little bit easier through an app called Nokia Contacts Transfer. 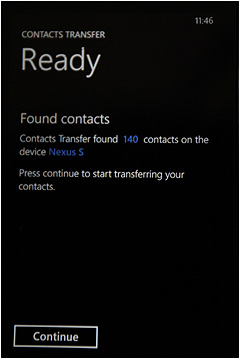 An active Bluetooth connection is all that is needed to transfer contacts from a phone to your Lumia handset. Of course you can always sync your contacts using your Windows Live ID, but this feature is great especially because you can do contacts transfer offline.

Now if you got a Lumia handset bundled with a postpaid plan, it’s likely that your phone is locked to that telco. In most cases, that’s the end line for your hopes of using a different provider on your phone (unless you pay an extra to get your phone unlocked by cellphone geek or tinker with your phone yourself). Luckily, Lumia phones has this app called Network setup that lets you unlock your phone with ease so you can put a different telco’s MicroSIM in your Lumia phone as long as you get an unlock code from the telco that came bundled with the phone.

In terms of responsiveness, the Lumia 710’s configuration is more than enough to give its users a snappy response even on most tasking situations. This is shown by its impressive benchmark results using WP Bench Free and Benchmark Free.

Here’s the result and how it fared against other smartphones. 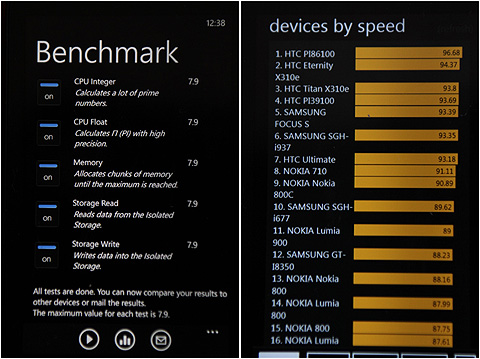 Browsing using the Internet Explorer mobile browser is fast as expected. Pages load quicker and lags are tolerable. Everything was good until I found out that the phone doesnâ€™t support Flash or even Silverlight. It would have been better if it does have support for it, but nevertheless browsing experience is still nice.

The 5MP camera of the Lumia 710 may not sound too capable, but the picture quality says otherwise. The shooter is capable of capturing vivid colors with minimal amount of noise given its low megapixel count.

Users can capture stills using the physical shutter key or touching the screen. The only thing that I didnâ€™t like about it is the physical shutter key. Focusing using physical shutter can take a bit of getting used to as the key is just as the same height as the removable back cover making it difficult to focus on a subject and cause accidental captures. But after some time and little bit of practice, users should get the hang of it. It is also worth mentioning that the uncomfortable shutter key can launch the camera app from the lock screen in amazing fashion. Users can switch from a sleep state to shooting pictures within a second. 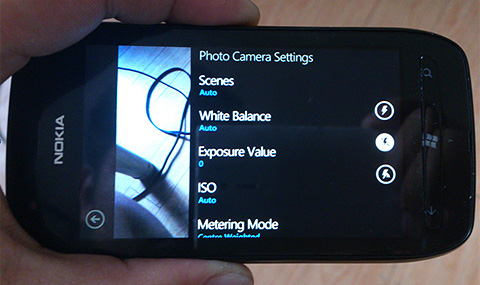 The camera app is simple and easy to use. It also offers a range of customizations for those who are not content with the camera’s auto features. These customizations are: 11 scene modes (including auto), 6 White Balance modes (including auto), 9 notches of Exposure Value (from -2 to 2), 5 ISO adjustment (100, 200, 400, 800 and Auto), 3 Metering modes (Center Weighted, Frame Average and Center Spot), 5 Color effects (Normal, Black& White, Sepia, Negative and Solarize), 5 Contrast and Saturation adjustments, 2 Focus Modes (Normal and Macro), 2 available resolution (5MP @ 4:3 and 4MP @16:9) and 2 Flicker Reduction setting (@50Hz and @60Hz).

Being a single core device, the Lumia 710 is only limited to 720p video recording. But that doesnâ€™t equate to a crappy video clip as show in the sample video recording that I took using the phone.

Note: Iâ€™d like to apologize for my shaky hands that resulted in to a shaky video. It was 34 degrees outside at the time of shoot and my hands just got off from a very heavy Canon 7D with an equally heavy Sigma Lens. 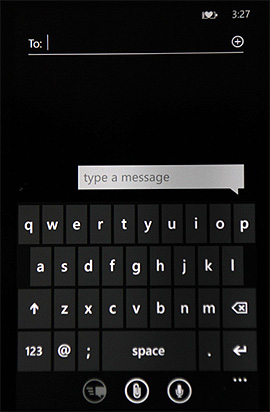 Talking about the battery life, the Lumia 710’s 1300mAh BP-3L battery may seem to be lacking on paper but its performance is actually quite decent.

With minimal use (few text messages, few short calls, a couple of minutes of game time, and occasional checking of email) I was able to squeeze in 3 daysâ€™ worth of juice out of the phone. But in moderate to heavy use (with 3G connectivity and WiFi), the Lumia 710’s small capacity battery proves to be a bit short in giving a satisfactory performance as it didnâ€™t even got me through half a day. Nevertheless, a single charge should suffice to get you through a day of normal use and users can extend the life even more with the help of Windows Phone’s battery saving feature. 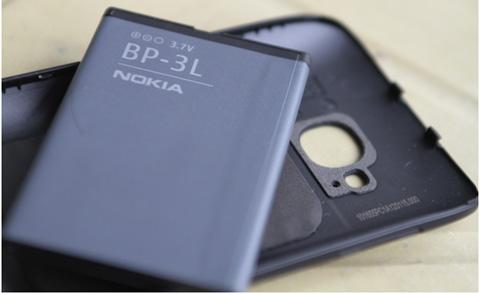 Overall, I find that the Lumia 710 as a very decent phone that has the needed configuration and functionalities enough to take on almost every smartphone needs of a user. I like the addition of Nokia’s ClearBlack Technology and how it was able to compensate for the lack of an AMOLED screen. Though not as visually stunning as devices with AMOLED (Super AMOLED) screens, the Lumia 710 is still capable of displaying rich colors and provide very decent outdoor legibility.

The plasticky design may be a deciding factor for some, but IMHO I am looking at two possible dealâ€“breaker for this phone; its 8GB non-expandable storage capacity and shortage of apps in the Marketplace. Although the latter can be improved over time (hopefully), there’s not much a user can do about the storage. Of course there’s the Windows Live SkyDrive to up the storage. It’s great when youâ€™re online, but totally useless when not and is just enough to substitute a physical storage. For users who often use their smartphone for browsing, the Internet Explorer browser though fast is lacking support for flash. The battery life could also prove crucial to the success of the Lumia 710, but if youâ€™re not a power-user the 1300mAh should suffice.

The Lumia 710 is available through Smart at Data Plan 1000 with additional Php450 monthly amortization (total of Php1,450 per month) for 2 years or you can get it unlocked over at WidgetCity.com.ph for only Php13,950.

Disclosure: Widget City is a display banner advertiser on this site and a supplier for YugaDeals, an affiliate of YugaTech.