Following the release of the Asha a couple of days ago, Nokia announces a new flagship phone – the Lumia 925. The phone is every bit of the Lumia 920 but better. It has 4G LTE, an improved aluminum frame and a few software additions.

Starting off with the display, Nokia has abandoned the IPS LCD of the 920 and opted for a ClearBlack AMOLED panel. The size is retained on 4.5-inches, still with a resolution of 768 x 1280. 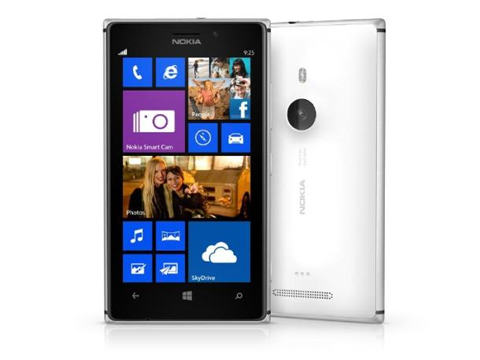 The back of the phone is the same polycarbonate, but the side frame is made out of aluminum. Nokia has turned the thick and heavy Lumia 920 into a sleek piece of hardware – from 10.7mm to 8.5mm and from 185g to 139g.

The phone will come in monochrome colors, meaning the bright colors that we love on the Lumia phones can only be accessed through a purchase of sleeves. Wireless charging can only be enabled through that too.

Nokia is also trying to catch-up with camera software. While Windows Phone has it’s own plain camera app, Nokia tops all of that with Smart Camera – which will feature Best Shot, Action Shot, Motion Blur Shot & so on.

Pricing is $616 before taxes, which is around Php25-26k. The Nokia Lumia 920 landed months ago for a price of Php27k, so expect the flagship update to take its place, creating a price drop for the 920. Since the new Lumia features LTE, we can hope & expect that the local telcos will offer it.

Apparently, we weren’t able to see the rumored 41MP Nokia “EOS” running Windows Phone, which is quite disappointing. Nevertheless, will it be worth the upgrade? Did the Lumia 925 impress? Leave your comment & your opinion down below.

I think the admin of this web page is truly working hard in favor of his web site, for the reason that here every material is quality based material.

Kudos to the comments of most people on this post. Well informed! I’m using HTC 8x. It would have been a Lumia 920 if it arrived earlier in the Philippines. Now 925 but I already have a smartphone. I’m very satisfied with Windows Phone 8.

i’m waiting for nokia asha 501… i just want the old nokia handsets that you can change the back cover… i don’t covet s4 or iphone 5, mas simple at sayang 30 K no, save mo na lang yan… or iinvest mo sa food cart business… dadami pa

Thank you for bringing up that myth about “more cores= better phone”. One thing I noticed is that most people who visited this Tech. site are suckers for Specs., Cores, RAMs, and benchmarks.:This people do not know about hardware optimization. The Specs of these flagship phones are quite telling:
Iphone5: 1 GB RAM, Dual Core, on IOs
Lumia 925: 1GB RAM, Dual Core, on Window OS
BB Z10: 2 GB RAM, Dual Core, on BB10 OS
These phones do not have Quad Core and more RAMs because it is NOT needed. The O/S run efficiently with just the dual core hardware because it is optimized to the OS.
I do not want to put you on the spot but your statement is incorrect. Nokia Asha 501 has lower Specs. 64MB RAM, with 128 MB internal Memory on new Asha OS, I could not comment on this phone as obviously, the hardware is optimized to the OS as well. Only Android phones have quad cores or more because the OS is not optimized and the platform is core hungry.

Funny how furion did not touch on build quality.

Android is a lame VM-running power hungry java shit. It is a puzzle of too many menus and submenus: a disaster of UI design. If android were a fashion disaster, it would be Tessa Prieto: too busy; too much going on. At 30k++ the build quality of S4 is a crime to all humanity. Mas matibay pa ang tupperware lunchbox ko nung high school. To think android is free or charge, you only can think kung ano ang 30k sa S4? The silver band? Ay wait, plastic rin un.

920 on steroids?… i dont know where you get your info but i dont think this is a 920 on steroids. baka its the other way around. also its not meant to replace the 920. it was made to cater to a different market.

Android just cannot keep up with the optimised windows phone 8 at 2 cores. Kaya nga mas mura ang WP8 dahil you do not pay for extra RAM and extra cores. You get a smooth experience less the price.

For a glorified dumbphone OS, 256MB should be enough.

If this is an ‘expert review’, the Cons would be laughable. Keep in mind that this is a window phone and NOT an Android devise. The “GPU’,”CPU” and the 1GB RAM are optimized to run the windows OS efficiently. Iphone5 has 1 GB Ram and its OS run efficiently. This phone has 1.3 MP front camera- 720P, which is the same or better than iphone5. As for the S.D. Slot, Google’s flagship Nexus4 has no SD Slot, same thing with Iphone5. I guess that any platform OS other than Anroid would be a ‘Con’ for you. If it is just your personal opinion, then it’s okay. You are entitled to your personal opinion.

His point is probably the phone’s price against the specs not price against performance. He’s probably saying this phone is expected to cost lesser than the Android flagships because its specs is lower.

on steriods? it’s basically the same phone on an aluminum frame…