OPPO has finally launched the Reno 2, the company’s successor to the Reno that launched a couple of months ago. With its shark-fin pop-up mechanism, quad cameras, and Snapdragon 730G chipset see how the Reno 2 fares in our review. 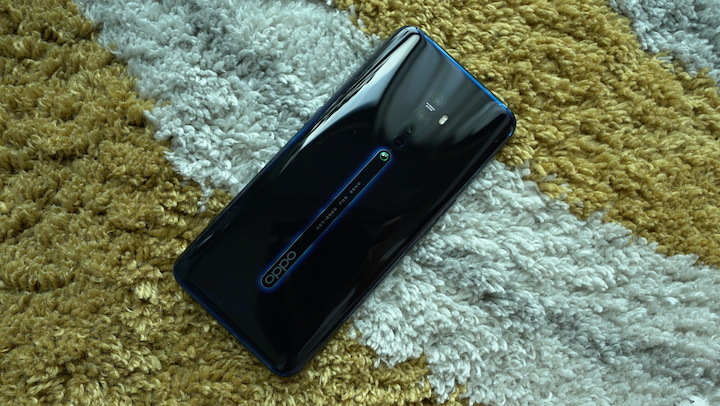 The OPPO Reno 2 comes in three colors, namely Sunset Pink, Ocean Blue, and Luminous Black, which we have. Looking at the body carefully, it isn’t just black, but there are subtle blue accents around the edges. The device’s rear is protected by Corning Gorilla Glass 5, making it feel sleek, premium, and almost flagship-like in the hands. 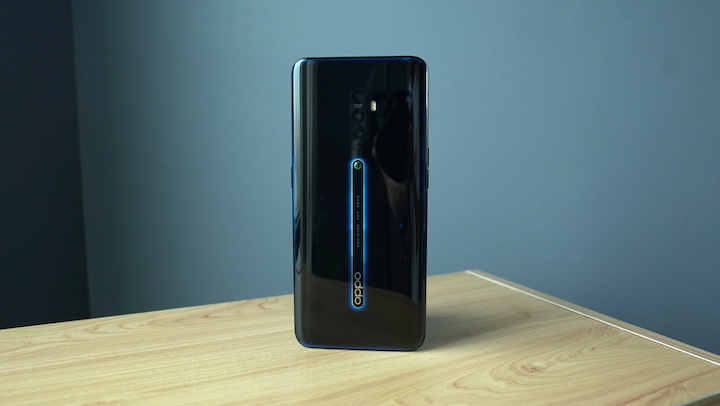 The Reno 2’s quad cameras are located on the rear, lined up in the center. Right below them is the O-Dot, an aspect carried over from the original Reno. The O-Dot lifts the smartphone slightly off a surface to prevent the cameras from getting damaged. Turning it over, the Reno 2 has a full-screen display, with no notch to be found anywhere. It’s also protected with Corning Gorilla Glass 6. 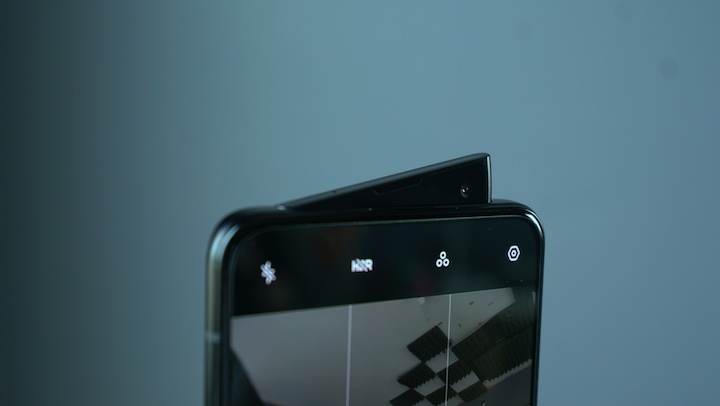 The notch-less, full-screen display is possible, all due to the Reno 2’s shark-fin pop up camera module. An earpiece can also be found next to the shark-fin shooter. 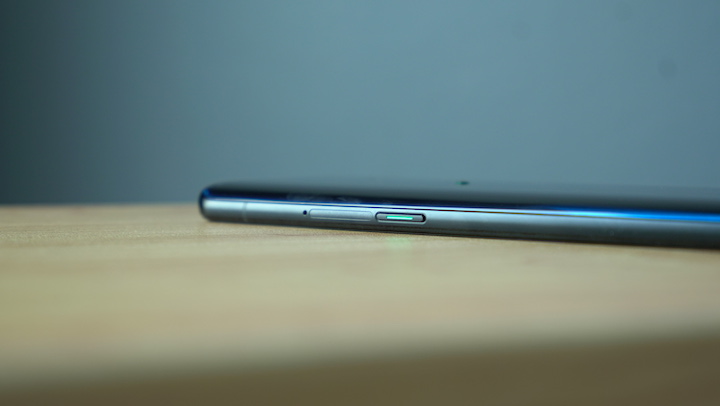 Residing on the left is the volume rocker, while on the opposite side sits the power button and the SIM card slot. All buttons are easy to reach and are clicky as well. The speaker grille, USB-C port, 3.5mm headphone jack, and a microphone take up space at the bottom of the device.

Overall, the Reno 2’s design didn’t change much from its predecessor. It retained several aspects, most specifically its shark-fin camera. The Reno 2 does have a slight heft to it; despite that, it’s still pretty comfortable to hold.

The Reno 2 sports a 6.5-inch AMOLED panel with a resolution of 2400 x 1080. Due to the lack of a notch, video-watching and gaming are incredibly immersive. Colors are punchy and vibrant, while the blacks come out deep. We also like how it’s bright enough to use outdoors, even at just 80% brightness. As mentioned, the display comes protected with Corning Gorilla Glass 6. Users with slippery fingers no need to fret about cracking the screen as soon as they get their hands on it. 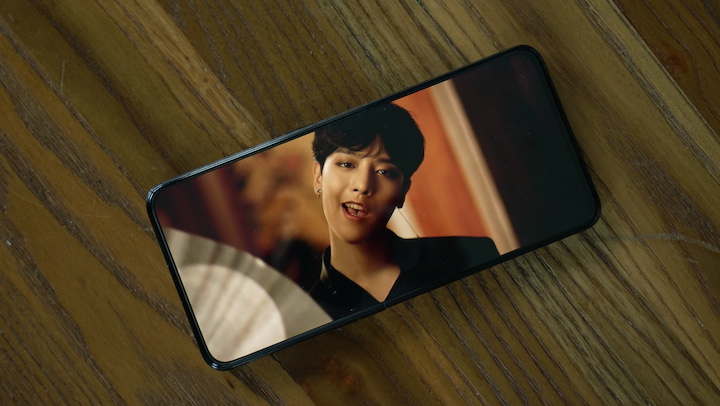 Audio produced by the single downward-firing speaker is somewhat decent as the separation between mids and highs is present. Lows are pretty much absent, however. We recommend using earphones instead for a better listening experience.

The Reno 2 sports a quad-camera setup, consisting of a 48MP primary, 13MP telephoto, 8MP ultrawide, and 2MP monochrome. On the other hand, the shark-fin pop-up module has a 16MP shooter. 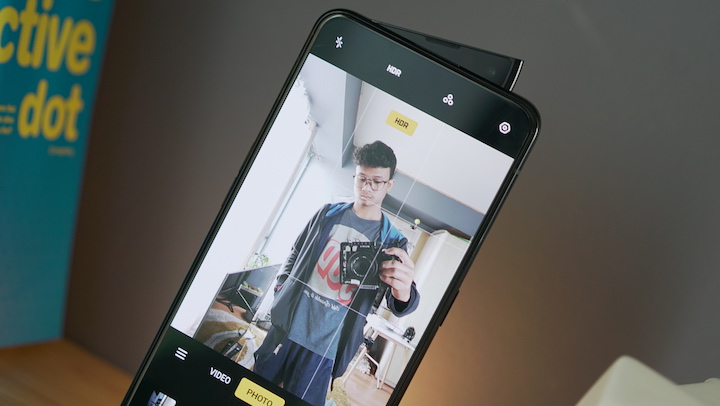 The 48MP Sony IMX586 camera produces sharp images, with colors coming out more saturated than expected. Exposure is decent and consistent in all lenses. Portrait shots have proper subject-background separation, and the bokeh effect has a nice touch to it. When it comes to low light, the shots do look good, but there’s a slight lack of color to them. In night mode, the images have a neat touch to them, with the details preserved.

Selfie-wise, the Reno 2 delivers good shots under ample lighting. Skin tones look flattering, even under Portrait mode. Photos with the beauty mode switched on also look satisfying, as it still looks natural and not overly processed.

For videos, the Reno 2 can shoot up to 4K at 30fps. Oddly enough, video stabilization is better at shooting at 1080p. There’s also an option to shoot videos in portrait mode. Software-wise, the Reno 2 comes with OPPO’s ColorOS 6.1, laid on top of Android 9 Pie. Apps and icons can be arranged in two ways, standard mode or drawer mode. There’s also an option to turn on a Smart Sidebar where users can put in their most-used apps for easier access. It sits as a slim grey bar on the right side of the screen and will only slide out when tapped. Unfortunately, ColorOS 6.1 doesn’t have a dark mode option to it, so users are stuck with its default light mode.

Pre-installed apps in the Reno 2 include Google apps, and OPPO’s ORoaming, App Market, Clone Phone, Game Center, and Game Space. Third-party apps such as Lazada, WeSing, and Soloop also come with the Reno 2 out of the box. The Reno 2 has 256GB of storage, with about 224GB.

Qualcomm Snapdragon 730G powers up the Reno 2, along with an Adreno 618 GPU and 8GB of RAM. As always, we ran it through a couple of benchmarks to see how it fares: 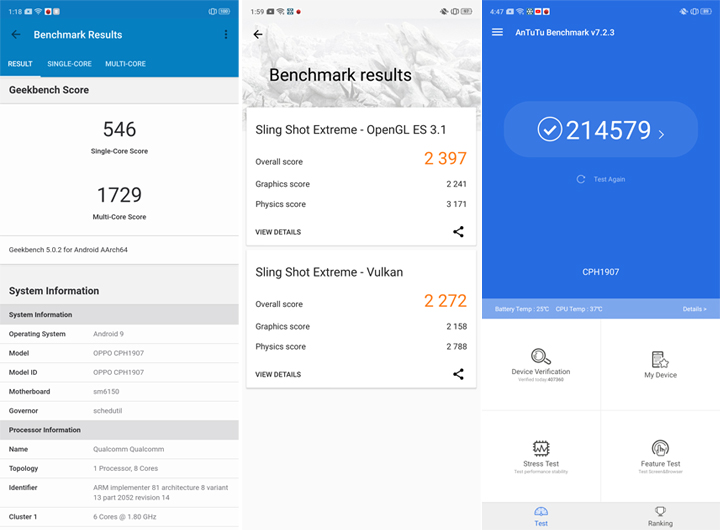 Carrying a mid-range chipset, the Reno 2 is a pretty capable device. Basic tasks such as navigation, web and social media browsing, messaging, and the like aren’t an issue at all. Multitasking didn’t give us any hiccups as well. Gaming is also great with the Reno 2. We tested out COD Mobile and PUBG Mobile; both games delivered a smooth performance with minimal frame drops.

When it comes to biometrics, the Reno 2 has an in-display fingerprint scanner and face unlock. The in-display fingerprint scanner performs decently and also seems to have a quicker response time than that of the original Reno. The face unlock is slower between the two; you’d have to wait for an extra second for the pop-up camera to surface for it to scan your face. It still does work, though.

Standard connectivity features such as 4G, LTE, Wi-Fi, and Bluetooth are all present in the Reno 2. Location-based apps also function pretty well without hitches. There’s also a gyroscope sensor, making it possible to use apps that have AR to function. The Reno 2 retains the original Reno’s fantastic design, now with a good set of cameras and a good chipset. There are a few issues, though. It’s pretty bulky in the pockets. There are minimal frame drops when gaming and face unlock response is quite slow, but they’re minor issues at best. What makes it difficult to recommend the Reno 2 to users is its price tag of PHP 28,990. For the same price range, you can acquire a flagship smartphone such as the Huawei P30 or the OnePlus 7. Still, if you’re incredibly fond of the shark-fin design and don’t mind the features and its price tag, then the Reno 2 should be right in your hands.