Realme has launched its first smartphone in the Philippines for 2020, the Realme 5i. It’s almost identical to the Realme 5 but with some minor differences in specs. The question is, is it worth getting, or you’re better off shelling out more for the Realme 5? Find out in our review. 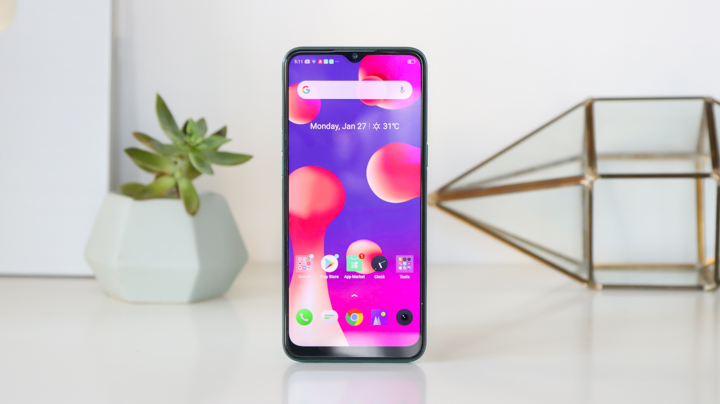 Author’s note: Since the Realme 5i is almost identical to the Realme 5, we have taken parts of the Realme 5 review and included it in this review. We have made updates to the design, camera, performance, battery, and conclusion to reflect the differences in both devices.

The Realme 5i has two color options, Aqua Blue and Forest Green, in a new Sunrise Dawn design which resembles rays of the sun, and a matte finish. It’s different from the Realme 5’s Crystal Purple and Crystal Blue colors with diamond cut design and glossy finish, which is great considering that the two almost have the same looks and specs. 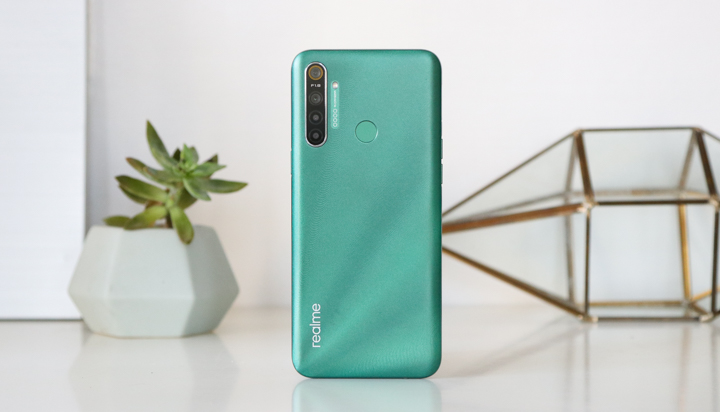 A quadruple-camera setup is found on the rear of the device, with the primary shooter accented with a gold ring. Realme also supplied the handset with a fingerprint sensor on the back. 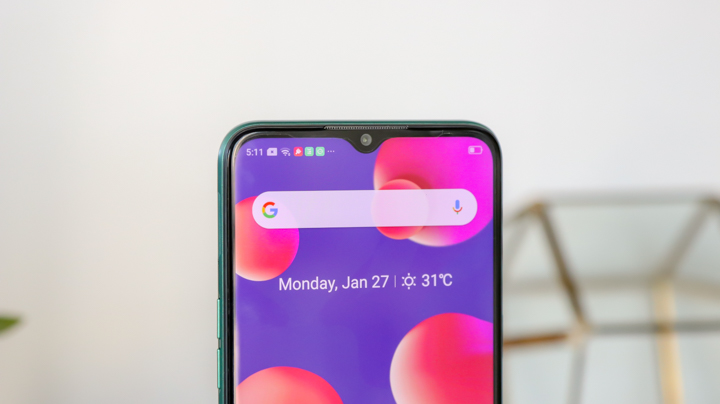 On the front, the Realme 5i sports a display with slim bezels surrounding it, with the thicker chin being an exception. A dewdrop notch is located at the top, and it’s also where the front camera resides. 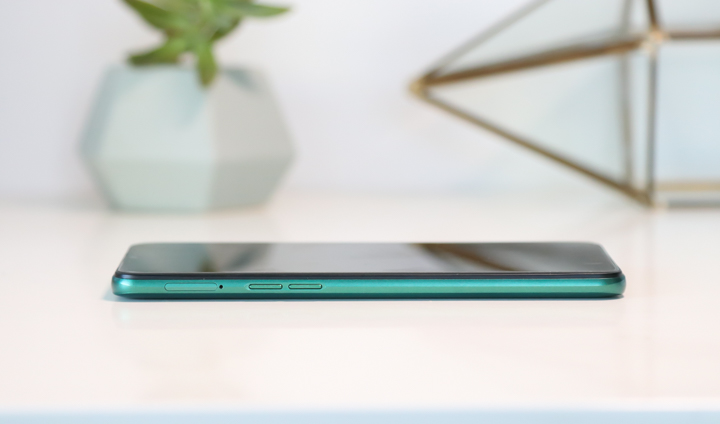 On the right, one can find the power button while on the left side is the volume rocker and the dual SIM card tray with a dedicated microSD card slot. 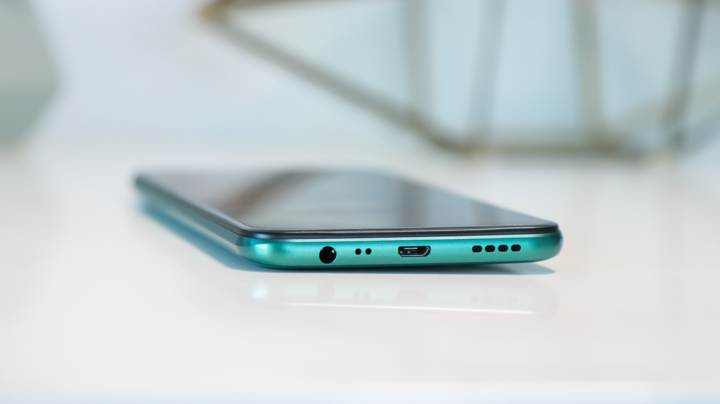 Located at the bottom are the 3.5mm audio jack, a noise-canceling mic, a single downward-firing speaker, and disappointingly, a micro USB port. We hope that Realme would get with the program soon and equip their future smartphones with a USB-C port already.

The Realme 5i is equipped with a 6.52-inch HD+ (1600 x 720) mini-drop IPS display which is equal to 269ppi. It also has a Corning Gorilla Glass protection although Realme hasn’t specified yet if its the 3+ version like on the Realme 5. Panel brightness is excellent; we can use the smartphone under direct sunlight even at just 55-60%. Color saturation levels are also pretty good, and reproduction is also reasonably accurate.

See also  5 Reasons to Buy the Realme 5i 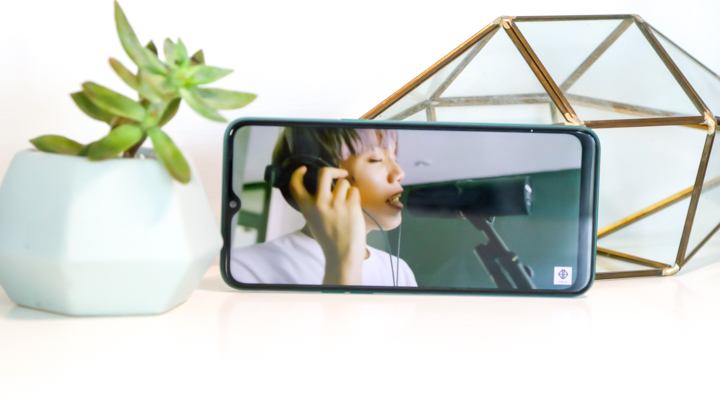 As for the downward-firing speaker, the audio quality isn’t good, but it isn’t that terrible either. Lows and mids are pretty lacking, and the audio comes out distorted when the volume is set to the maximum. The placement of the speaker is poor as well; most users would probably end up covering the speaker when holding the device against the palm.

The Realme 5i runs on ColorOS 6 based on Android 9 Pie. Newly-installed apps can be found on the home screen, and bring up the drawer will show every app installed in the handset. 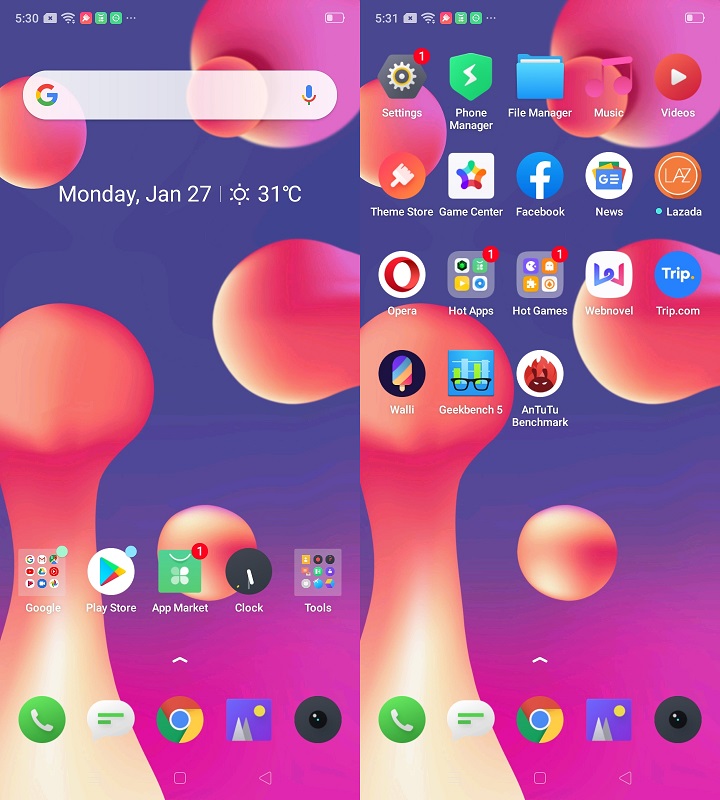 Navigation can be done using gestures or virtual keys; if opting to use the virtual keys, ColorOS 6 offers four types of layout for its users. If you’re into Dark Mode, you can activate it by going into Settings then Realme Labs. Pre-installed apps include the regular Google apps, and it also has tools such as a Game Center, Game Space, ORoaming, Clone Phone, One-Tap Lockscreen, and the like. Third-party apps such as Lazada, Facebook, and the like, also come with the Realme 5i out of the box. Our handset possesses 64GB which you can expand via the dedicated microSD card slot.

A quad-camera setup composed of a 12MP main, 8MP ultrawide, 2MP macro and 2MP depth sensor sits on the rear. For the front camera, it has an 8MP sensor, which is a downgrade compared to the Realme 5’s 13MP, but the 5MP difference shouldn’t be a big issue. 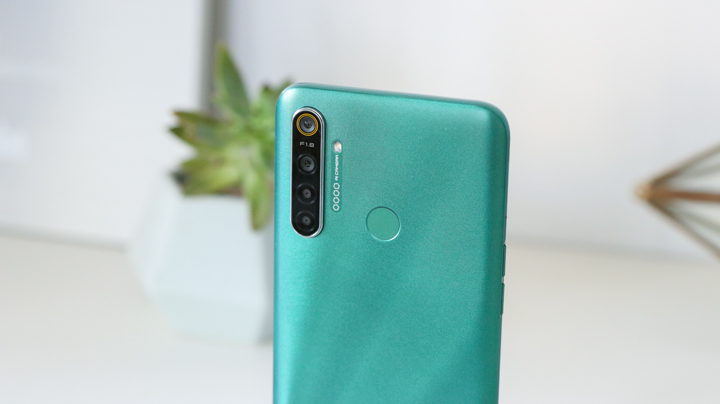 We didn’t notice any huge difference in front-camera quality as it is good enough for social media uploads. One thing though is that it tends to overexpose highlights. Portrait-wise, subject-background separation is modest, while the overall image looks soft.

For rear samples, the images produced show crisp details; however, some of them can look over-sharpened. Similar to the selfies, the photos also tend to overexpose highlights. Still, under the right lighting conditions, the colors are vibrant and have adequate saturation levels. In night mode, the images have a balance of shadows and highlights. It takes about 7 seconds to complete the shot but is effective in improving the overall quality of the image.

Video-wise, the Realme 5i can shoot up to 4K at 1080p and 30fps. Video quality is rather average and susceptible to shakes. Watch the sample video below:

Like the Realme 5, the Realme 5i is powered by a Qualcomm Snapdragon 665 CPU with an Adreno 610 GPU, and 3GB RAM, so we can expect the same level of performance. We ran the device through our usual benchmarks on High-Performance mode and here are the results: 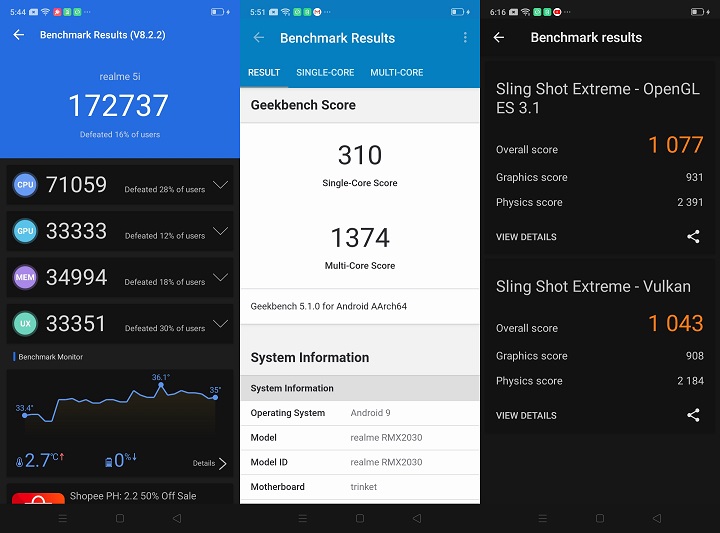 Doing tasks such as social media browsing, navigating around, messaging was pretty good. It wasn’t as speedy as we wanted it to be, but the Realme 5i still performed smoothly. Do take caution in having multiple apps running at the same time as it’ll make the device feel sluggish. We were also able to play games with heavy graphics; however, do expect frame lags to occur from time to time.

The standard connectivity features, such as 4G, LTE, Wi-Fi, and Bluetooth, are present in the Realme 5i. Location pinning is also fairly accurate, as we didn’t encounter any issues upon using location-based apps. One of the main features of the Realme 5i is the massive 5,000mAh battery. Since the capacity and specs are the same as the Realme 5, we can the battery life to be as good. In our standard video loop test (1080p video, 50% volume, 50% brightness, Airplane mode, headphones plugged in), it yielded around 25 hours of playback which is great. The handset takes about 2 hours and 30 minutes to charge, no thanks to that combination of extensive battery capacity, a micro USB port, and no form of fast charging support.

The Realme 5i is basically a Realme 5 but with a lower front-camera resolution, different design, and a lower price tag. Priced at PHP 6,990 with 3GB + 64GB configuration, it’s just PHP 1,000 less compared to the Realme 5 with the same configuration. Realme basically wants to further strengthen their foothold in the budget segment. The question is, should you buy this one instead of the base model Realme 5? 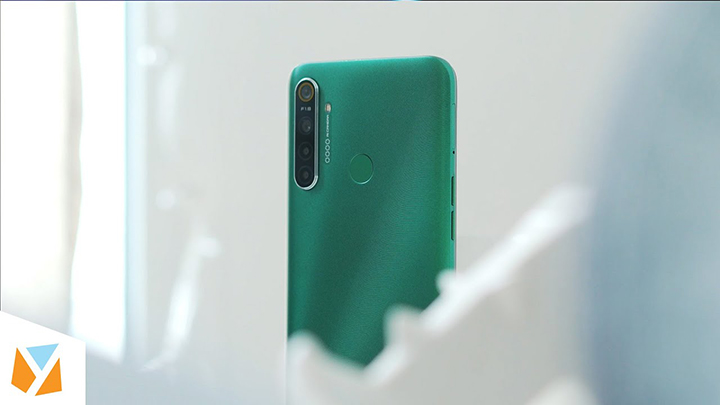 The answer is yes, especially if the budget is too tight and you’re not much concerned about the lower front camera resolution. Don’t worry though, as losing the extra 5MP is not a big deal. But if ever you’re eyeing the Realme 5, we suggest getting the 4GB + 128GB model instead.

What we didn’t:
• MicroUSB port
• No fast charging

The Realme 5i is a watered-down Realme 5 at a more aggressive price. For Rs. 8,999 the 5i does pack quite a punch thanks to the Snapdragon 665 SoC and 4GB of RAM. The 5,000mAh battery also delivers very good battery life.

More of a downgrade, hence the cheaper price, at 3/64 it may be looking to compete with the huawei y6s.