Just when we thought that realme has wrapped up its smartphone releases for the year, the brand recently brought the narzo 20 that highlights entry-level smartphones with a stylish design, powerful processor, and long battery life. A good contender that also ticks all the boxes is the vivo Y2oi. Both with an affordable price point at sub-PHP 8,000, which will give you the best value for money? Check our comparison review below to find out. 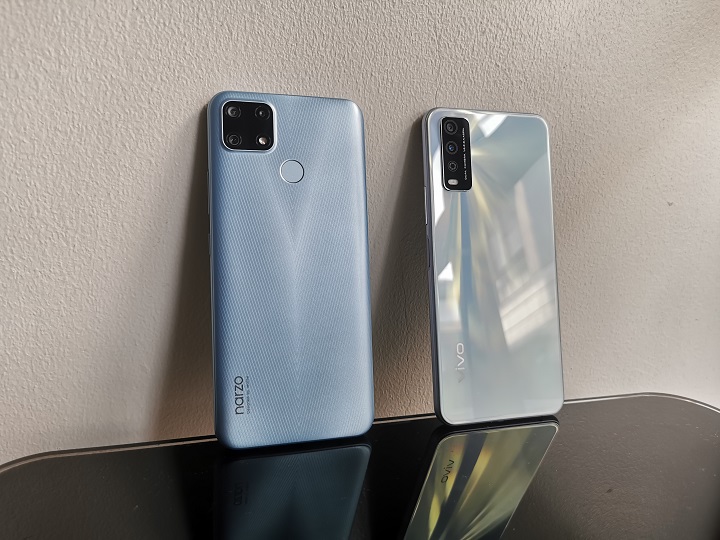 The realme narzo 20’s back panel has a textured finish in matte with a new V-design. The smartphone comes in two colors — Glory Silver and Blue Blade. We got the latter. 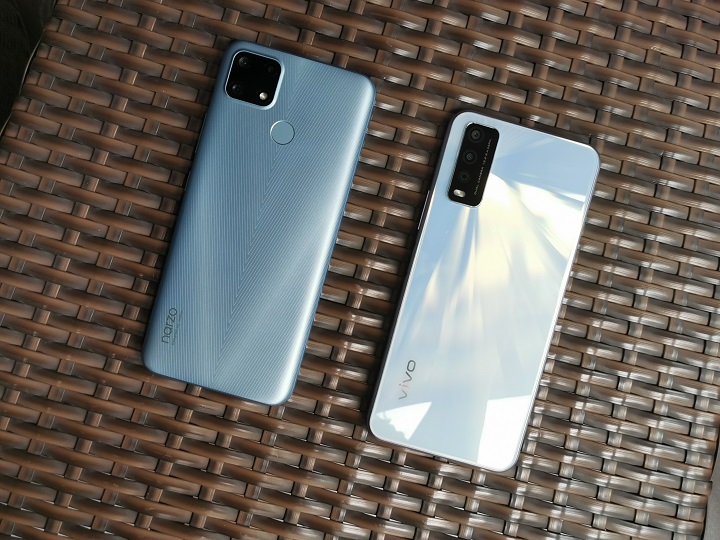 Meanwhile, the vivo Y20i has a glossy, 2.5D curved polycarbonate body that shows a ray-like design when placed under the light.  We received our unit in Dawn White, but it also comes in a darker hue of Nebula Blue. 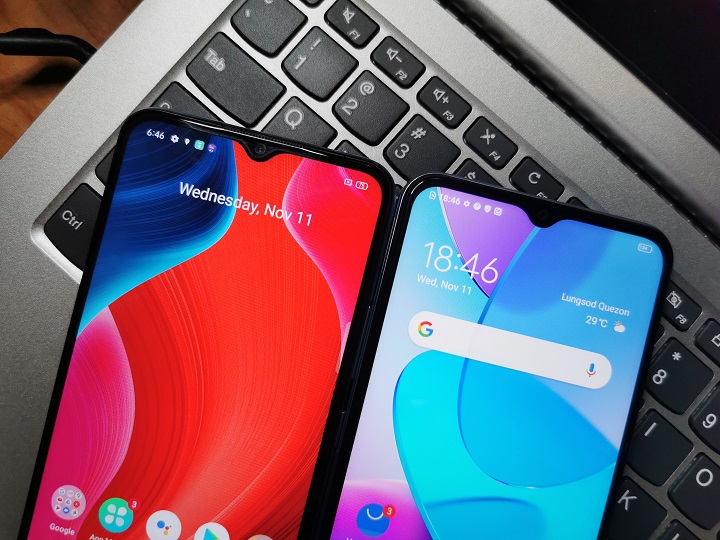 Upfront, the mentioned smartphones are similar to each other. Both have a water-drop notch for its front cameras, slim side bezels, thicker chin, and call speakers on the upper middle of the screen. The latter feature is longer on the realme narzo. 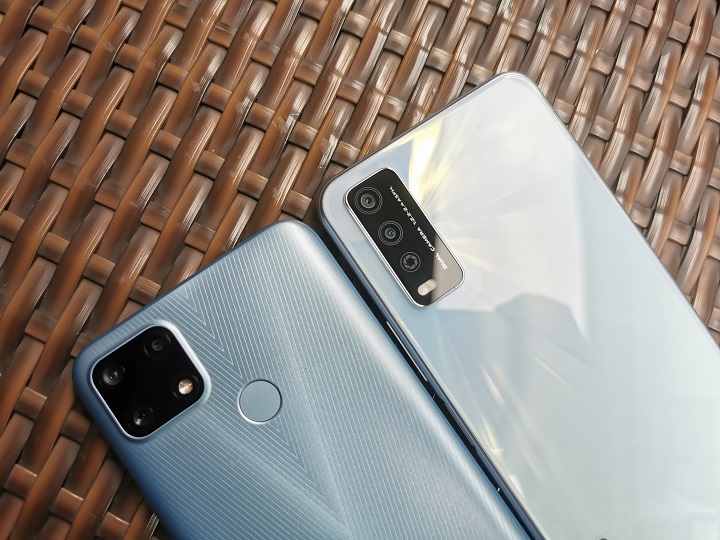 Flipping the smartphones reveals the branding for both smartphones on the lower left side. On the upper left is the rear cameras.  The narzo 20 has a rounded square camera module with three sensors, while the vivo Y20i has a rectangular module with two sensors. Both have LED flash as well. The fingerprint scanner for the narzo 20 is also located on its back panel. 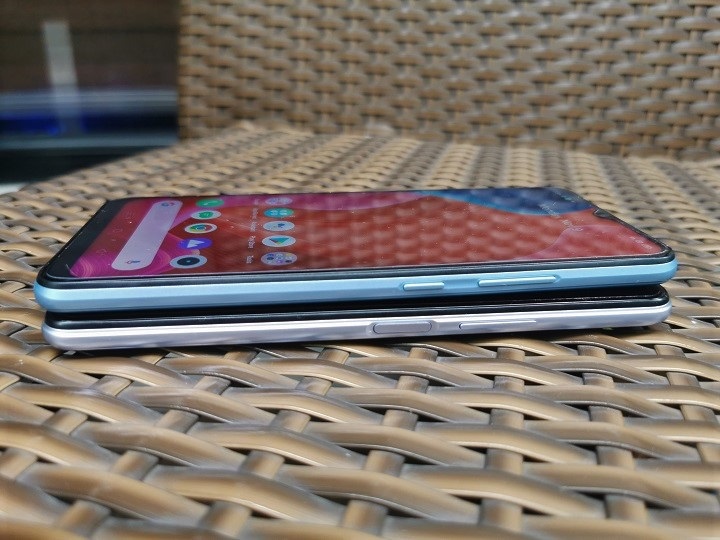 The button placements of the smartphones don’t differ from one another. The realme narzo and the vivo Y20i have its volume rocker and the power button on the right. However, the Y20i’s power button also doubles as its fingerprint scanner. 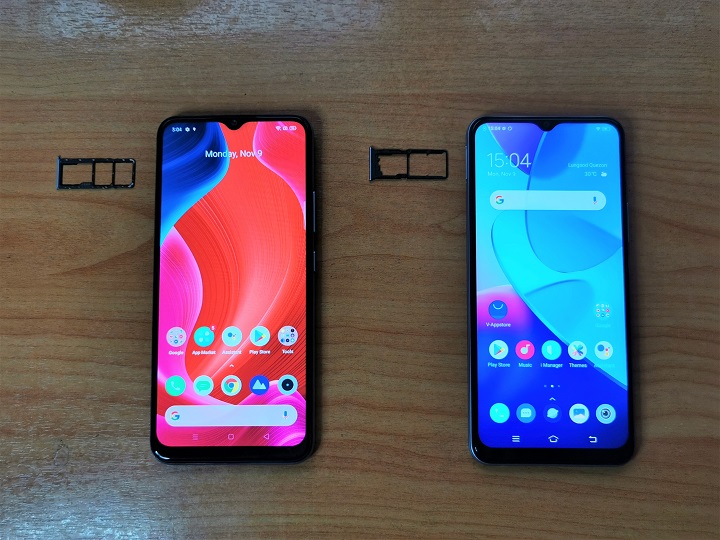 The SIM slots are both located on the left, with both smartphones having dedicated microSD slots and dual nano-SIM trays. 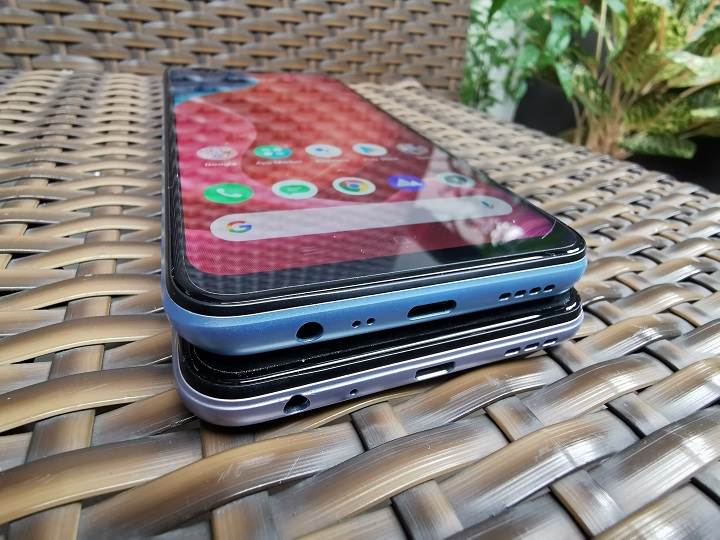 The bottom part of the smartphones is composed of the usual sports such as the 3.5mm headphone jack primary microphone, and single speakers. The narzo 20 has dual microphones and a USB-C port while the  Y20 sports a single mic and a micro-USB port. 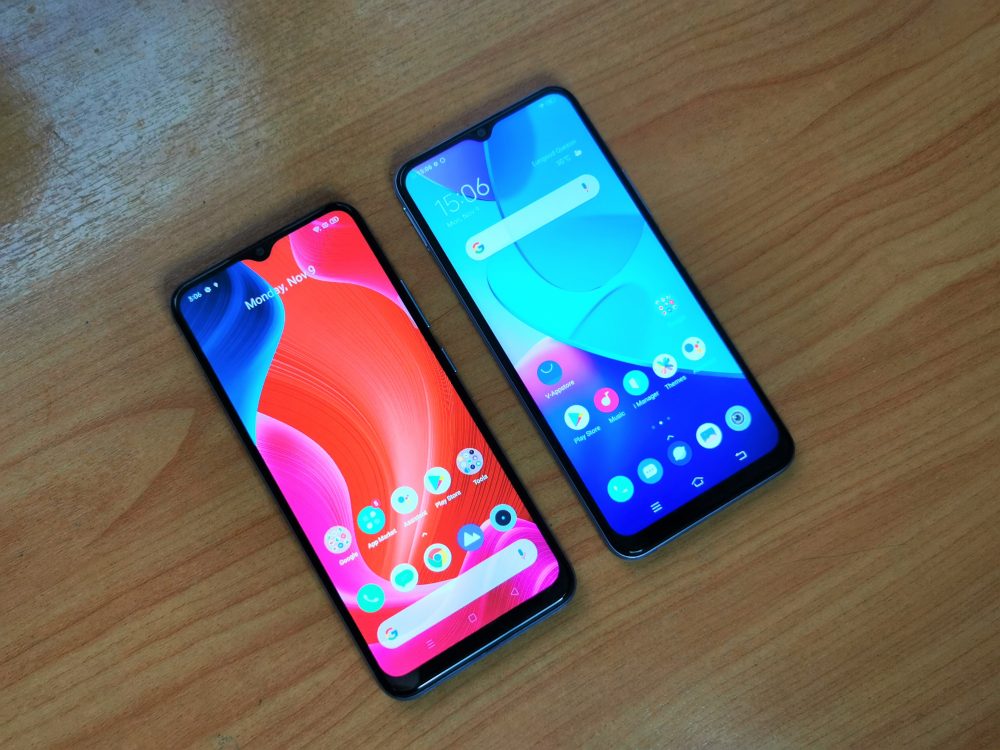 In terms of weight, the realme narzo 20 feels heftier to hold. It is 1.4mm thicker, 15.7 g heavier, and have curvier edges than the Y20i. The latter, on the other hand, is lighter and handy even when gripped singlehandedly.

In this aspect, we’re going for the vivo Y20i.

Both smartphones have large HD+ (1600 x 720) displays at 6.5-inch. However, the narzo 20 is an LCD, while the Y20i is an IPS. Both brands didn’t mention any glass protection for the displays, but both have pre-installed screen protectors. 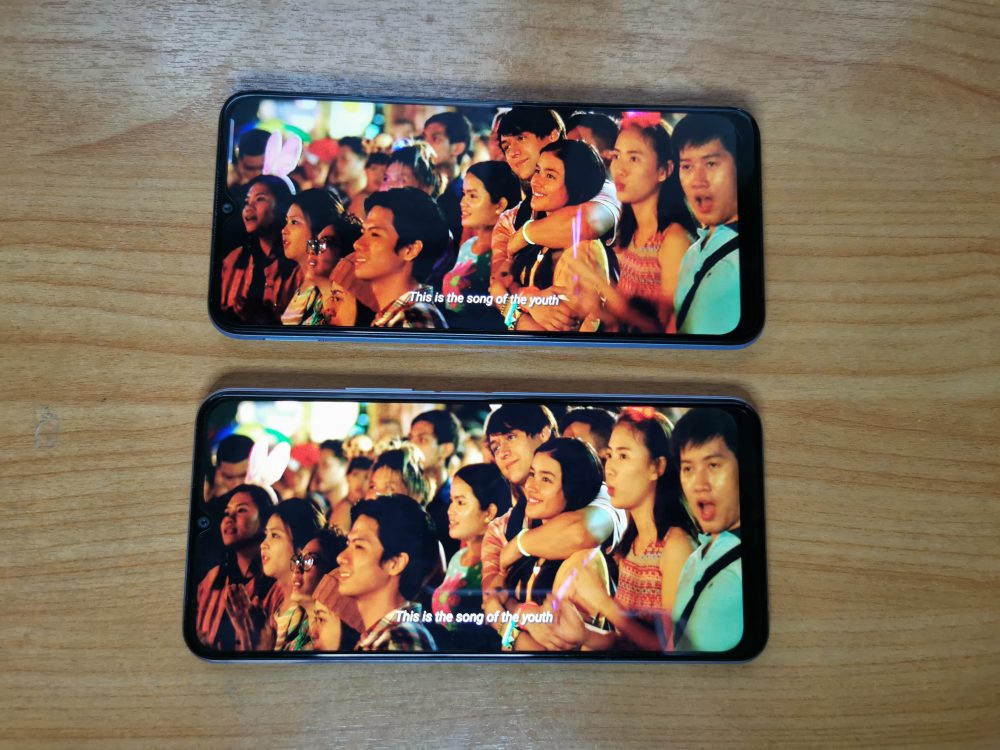 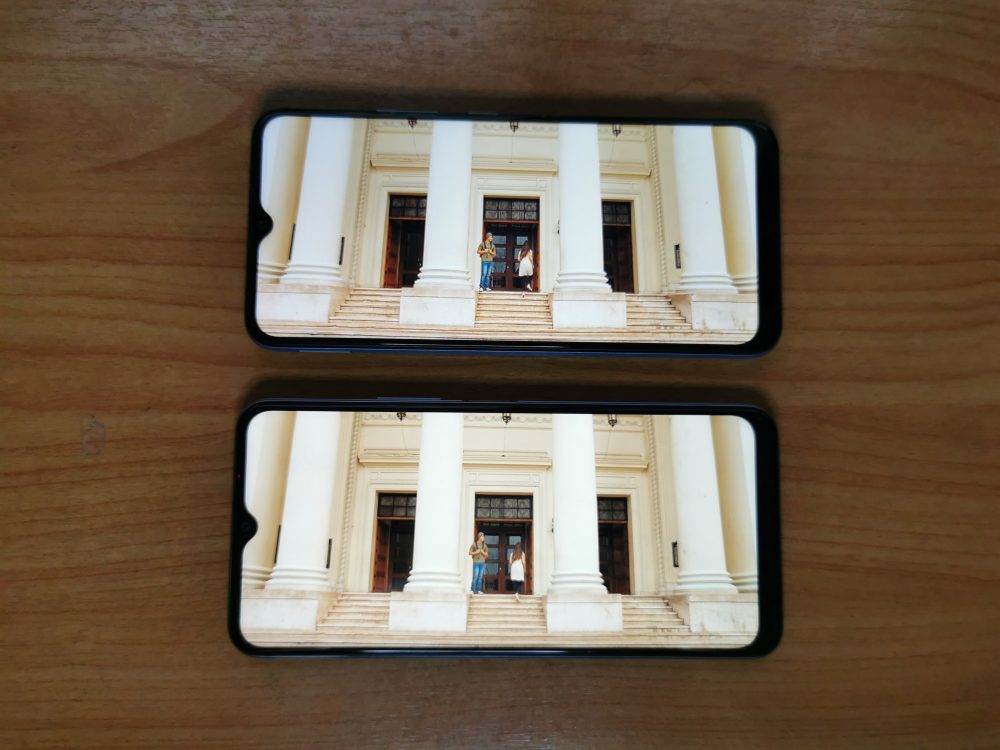 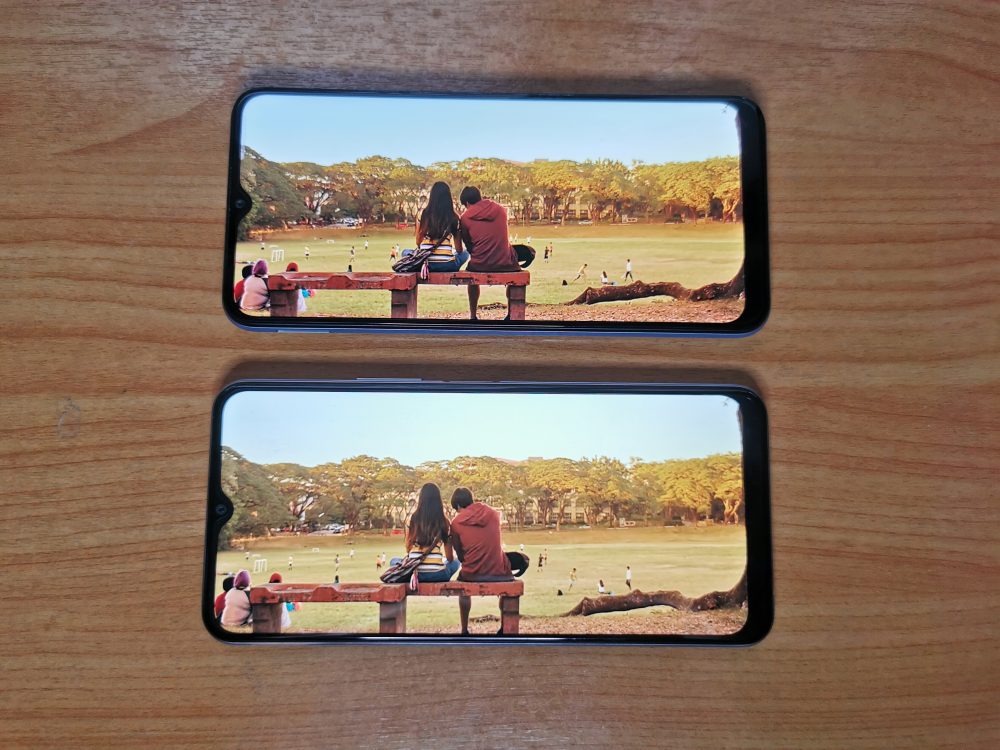 Equipped with HD+ displays, both deliver vibrant and decent color production. However, the vivo Y20i has cooler, more accurate hues and sharper details than the narzo 20. Subjects and colors are brighter, richer, and warmer on the realme narzo 20, yet it produces a noise when streaming content from Netflix. The narzo 20’s display is better for gaming and has minimal flickers. The smartphones have decent viewing angles and get bright enough for outdoor use. Although both have thicker chins, it has a minimal effect on the viewing experience. It may be a downside for nitpickers.

In this case, we’re giving points to the vivo Y20i.

For the rear cameras, the realme narzo 20 and the vivo Y20i is slightly different. The former offers more with triple rear camera modules consisting of a 48MP main, 8MP ultra-wide, and 4cm macro sensors. Meanwhile, the vivo Y20i’s dual rear cameras are composed of a 13MP main and 2MP depth sensors. Upfront, the smartphones both have 8MP single shooters. However, the vivo Y20i has a larger aperture on its front camera at f/1.8 than the narzo 20 which has f/2.0. Image quality also differs on both devices.
realme narzo 20 samples:

When it comes to outdoor shots, the narzo 20 has better colors and contrast. Images are sharper and more detailed. The colors are more vibrant and punchy, which can be observed in the greens, reds, and blues.

When it comes to low-light, the Y20i struggles in blurring the background and capturing a brighter subject. The details look degraded and muddy on both smartphones, though. However, the realme narzo 20 was better in focusing compared to the vivo Y20i. The former produces brighter and decent colors as well.

Bokeh shots are easy to shoot for both smartphones. However, the narzo 20 has a creamier background than the vivo Y20i. You’ll need to position your camera at a reasonable distance to get such results.

The realme Narzo 20 also focuses faster than the Y20i, which struggles to focus on subjects outdoors, low-lighting, and macro.

We get a different story when it comes to selfies. The vivo Y20i performs better than the realme narzo 20. It has more accurate and balanced colors, which results in more natural-looking selfies. Aside from maintaining details, like eyebrows and hair color, the vivo Y20i has minimal noise and looks softer even when the beautifying feature is turned on. It also retains skin tone and produces livelier eyes. Selfies look very artificial and washed out on the realme narzo 20. The same can be observed with the beautify feature turned on

In this case, I’m giving points on both devices. For the rear camera, the realme narzo 20 wins while the vivo Y20i gets the selfie category.

The realme narzo 20 is powered by a MediaTek Helio G85 chipset, while the vivo Y20i has the Qualcomm Snapdragon 460 processor. The former is paired with an Arm Mali G52 MC2, while the latter gets Adreno 610 as a graphics card. Although both processors were launched in 2020, it’s worth noting that the Helio G85 is newer, announced in May this year. The Helio G85 was manufactured using the 12nm process, while the Snapdragon 460 used 11nm. This means that the Helio G85 will perform better while being more power-efficient. In terms of clock speeds, realme’s chipset delivers faster up to 2GHz while vivo remains at 1.8GHz.

Based on the numbers, we’re giving the point to the realme narzo 20.

RAM, together with the processor, plays a big role in a smartphone’s overall performance. The realme narzo 20 and the vivo Y20i have 4GB of RAM. Both brands didn’t specify the type of memory. As expected, both budget smartphones can handle seamless multitasking, with multiple apps running in the background. Gaming is a breeze on the narzo 20. Meanwhile, we encountered a few occasional lags on the Y20i, but it didn’t affect our overall gaming experience.

For the RAM department, we’re calling it a tie on the realme narzo 20 and vivo Y20i.

Dominating this category is the realme narzo 20.

The narzo 20 is equipped with a larger 6,000mAh battery, while the vivo Y20i is only rated at 5,0o0mAh. Both also support 18W fast charging. Based on our standard video loop test, the realme 7 Pro lasted for 30 hours and 15 minutes of playback. The vivo Y20i is quite far behind, lasting a total of 22 hours and 36 minutes.

Based on our data, the realme narzo 20 aces the battery life category.

Both smartphones are pretty much the same in terms of connectivity. The narzo 20 and Y20i support 4G LTE, WiFi 5, and Bluetooth 5.0. Both have GPS, A-GPS, BeiDou, GLONASS, and Galileo in terms of supported navigation systems. For biometrics, the narzo 20 places its fingerprint scanner at the back panel while the Y20i has it on the side. The former, however, is rechargeable via USB-C while the latter has micro-USB.

For this, we give the points to the realme narzo 20 since it uses a more advanced charging port.

Both smartphones run based on Android 10 with their respective custom skins. The realme narzo 20 has the realme UI 2.0, while the vivo Y20i sports Funtouch OS 10.5. Both operating systems support Google Mobile Services and have their distinct features to make the User Interface functional and exciting.

For this category, we’ll give it both to the realme narzo 20 and vivo Y20i since they both allow customization and other features that you can enjoy from the Android 10.

The realme narzo and the vivo Y20i are locally available in 4GB + 64GB. realme’s narzo 20 is priced at PHP 7,990, while the vivo Y20i is more affordable at PHP 7,490. Although realme costs PHP 500 more, it offers more in the hardware department. The former offers triple rear cameras, a faster processor, and a larger battery. This is an important factor to consider if you’re looking for an entry-level gaming smartphone.

Without a doubt, the price department goes to the realme narzo 20.

The realme narzo 20 got eight out of the ten categories based on the tally, while the vivo Y20i got five out of ten. The fight between the two devices has been close. The realme narzo won in the battle with its better-performing processor, faster storage, and an efficient battery. Meanwhile, the vivo Y20i is a commendable midrange device for better design and build, display, and front camera. So, in terms of value, we recommend getting the realme narzo 20.