Samsung has just launched in the Philippines the latest versions of its mid-range series – the Galaxy A (2017). To give a better look at these devices, here’s our hands-on with the Samsung Galaxy A7 (2017). The new Galaxy A7 (2017) and even its other siblings resemble the design of the flagship Galaxy S7 with a glass front and back, and rounded aluminum frame. It’s a good to see that the mid-range smartphones of Samsung continue to get more love in terms of design.

The A7 has the biggest display so far in the 2017 series with its 5.7-inch Super AMOLED panel sporting a 1920×1080 resolution or Full HD. As always, the Super AMOLED panel from Samsung is pleasant to look at with its well-saturated tones. It takes advantage of its deep black and low-power consumption with the Always-On Display feature too. Above the display is the 16-megapixel front-facing camera with an f/1.9 aperture while below the panel is the traditional home button with a built-in fingerprint scanner sandwiched with a couple of backlit-enabled capacitive keys. On the left-hand side of the device are the power lock button and the loudspeaker, just like with the Galaxy J7 Prime. We find the speaker’s placement unusual yet clever since it’ll not get blocked by your hands during usage. To its left are the two separate buttons for volume up and down, and the SIM card tray. 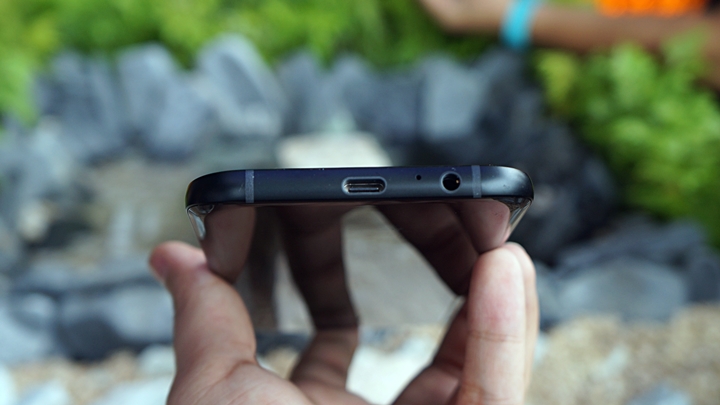 The top has top the dedicated microSD card slot leaving the bottom end with the 3.5mm headphone jack and USB Type-C port. This is be the first time Samsung puts the next-gen reversible port to its mid-range devices. 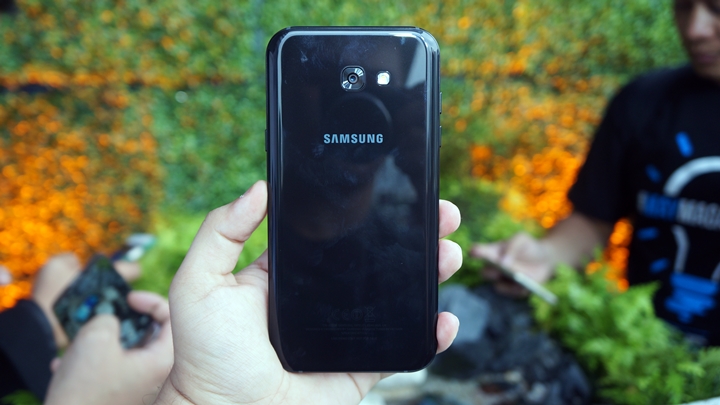 The glass back is quite shiny and a grease magnet, obviously. Here we have the main 16-megapixel camera that’s also equipped with a large f/1.9 aperture and an LED flash. Unlike the Galaxy S7, though, the camera is flushed to the body allowing you to lay the phone flat on a table. 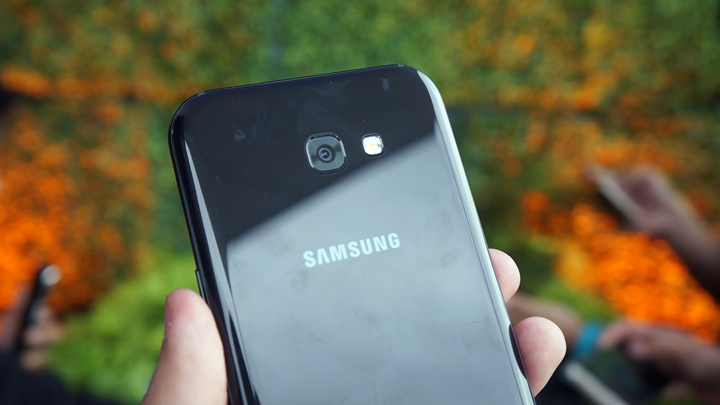 Here are a few early samples with the rear camera and also a selfie using the front camera:

The phone is powered by an Exynos 7880 octa-core processor clocked at 1.9GHz. It’s got an ample 3GB of RAM and a spacious 32GB of internal storage. We must admit, the setup is quite similar with Samsung’s former Galaxy S6 flagship. Unfortunately, though, it boots Android 6.0 Marshmallow out of the box but Samsung’s skin gives you Nougat’s splitscreen feature already. Giving juice to the smartphone is a large 3600mAh non-removable battery and lastly, the phone inherits the IP68 certification for water and dust resistance of the Galaxy S7.

The Galaxy A7 (2017) will be available in Black Sky, Gold Sand, and an exclusive Blue Mist color for Php23,990 and will arrive on January 28. Samsung is also offering a Galaxy A Bundle launch offer where buyers can get exclusive gifts up to Php5,000 (Free Level U Pro + Flip Wallet Cover) with every purchase.

Update (8:33 AM 01/13/17): We found out that there’s a dedicated microSD card slot on top of the handset. We’ve updated the article and regret the error.