One of Samsung’s newest entry-level device is in the form of the Galaxy J7 Core, a 5.5-inch device that is said to be capable of delivering a good mobile experience at a sub-Php10k price. Is the device a good gaming phone to boot? Let’s find out in our review. 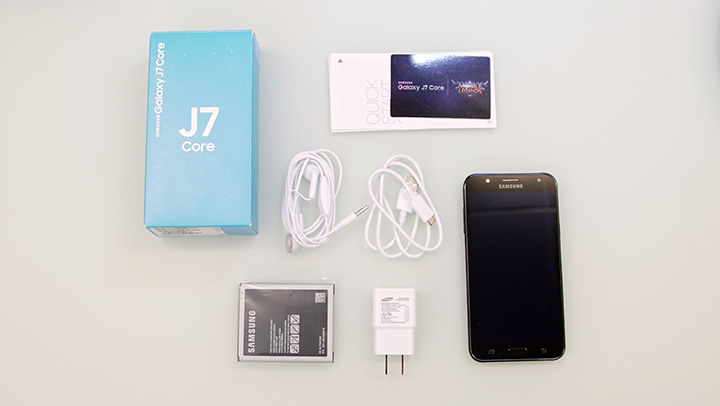 The phone’s packaging follows the same style as other J-series smartphones. Inside is the phone itself and its removable battery, a micro USB cable, a charging adapter, a pair of in-ear headphones, and a few set of papers with one containing a special passcode attaining freebies for Mobile Legends which is exclusive only for this device. 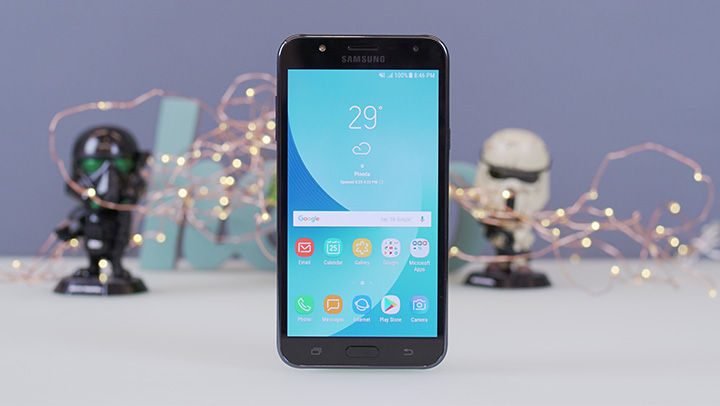 The J7 Core sports a design that resembles last year’s Galaxy J7 and On7 smartphones. At the front is the 5.5-inch Super AMOLED display along with the front camera, its dedicated LED flash and the usual sensors, plus two capacitive buttons that do not have any backlight and a raised home button that’s quite a joy to press. We’re sad to find that this phone doesn’t have a fingerprint scanner as other contemporaries in this price range already have them. 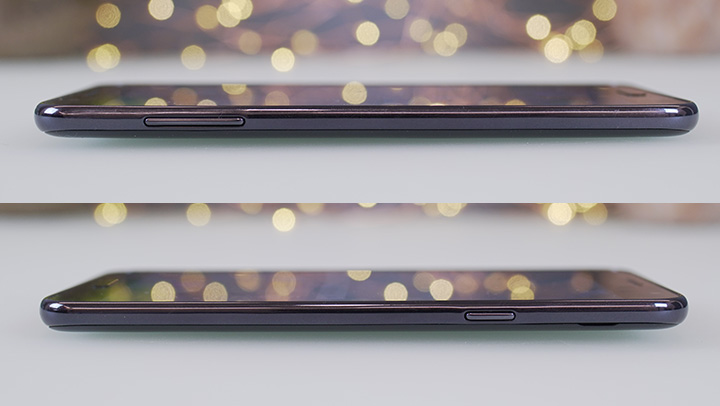 The left side houses the volume keys, while the right side has the power and lock button. Its side frames are done with a glossy finish which highlights the device’s aesthetic. 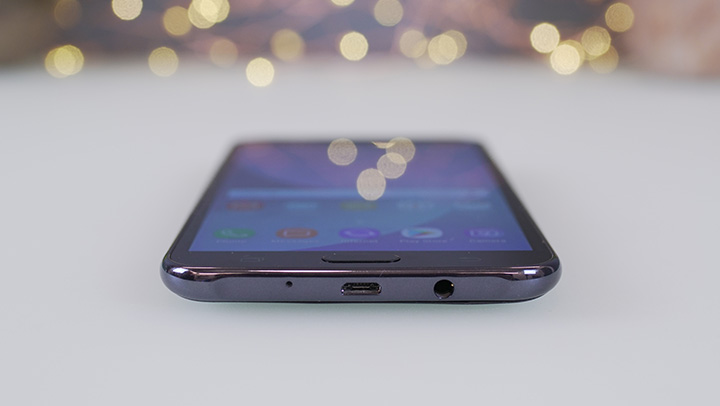 The bottom of the device has the MicroUSB port and the 3.5mm audio jack. 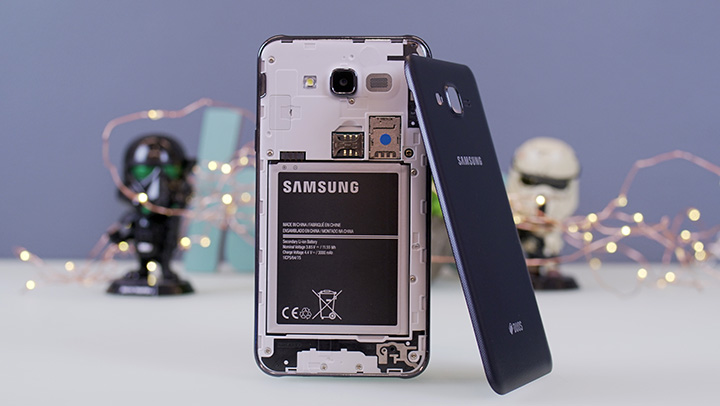 Flip the device over and you’ll see a textured polycarbonate back that is resistant to fingerprint smudges and grime. The top-middle part has the rear camera, while the accompanying LED Flash and the loudspeaker are placed beside it. Prying open the thin polycarbonate cover reveals a removable battery of 3000mAh capacity, two dedicated slots for micro-SIM Cards and a microSD card slot. 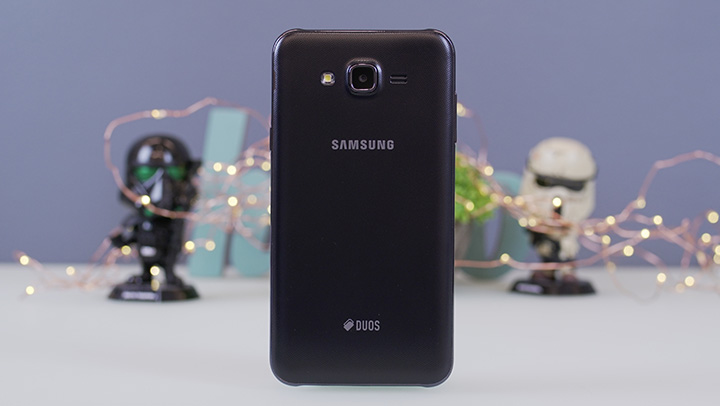 Overall, the device is quite big for a 5.5-inch device given that newer ones are already getting fewer bezels and less footprint. You can hold this with a firm grip due to the hand-friendly nature of the sides, but one hand operation could be a problem as your hand does not reach many parts unless you have the other on standby. Despite the phone’s profile, its weight isn’t that much of a problem as it’s light enough to be comfortably used for long periods.

The J7 core sports a 5.5-inch Super AMOLED display with an HD resolution and good color saturation that’s pleasing to the eyes. It has a decent sharpness, deep contrast, and good viewing angles. Brightness is also not an issue as it is very visible outdoors under strong sunlight. It’s also worth noting that the phone supports up to ten multitouch points which are nice for multiplayer gaming. 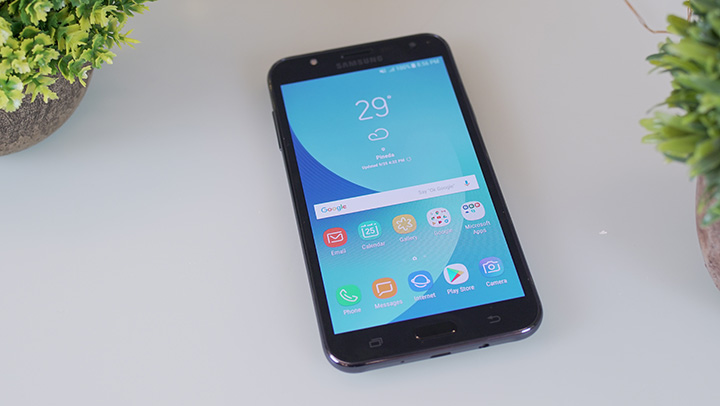 That said, multimedia consumption on the device is good with the device supporting multiple audio and file formats. Listening through the loudspeaker could provide at around 73db at best, although the packaged earphones are pretty much standard and it may be best to listen using an audio gear of your choosing. 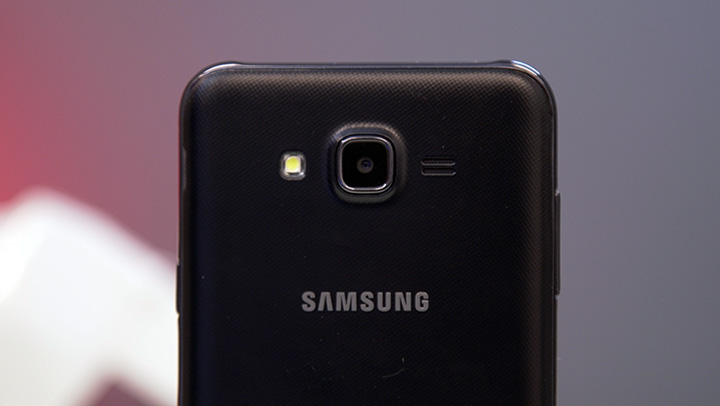 The 13-megapixel rear camera is a good one to use with its fast autofocus. Colors tend to be a hit or miss in most scenarios as it is either well-saturated, oversaturated or dull. Exposure and contrast, on the other hand, are at decent levels. 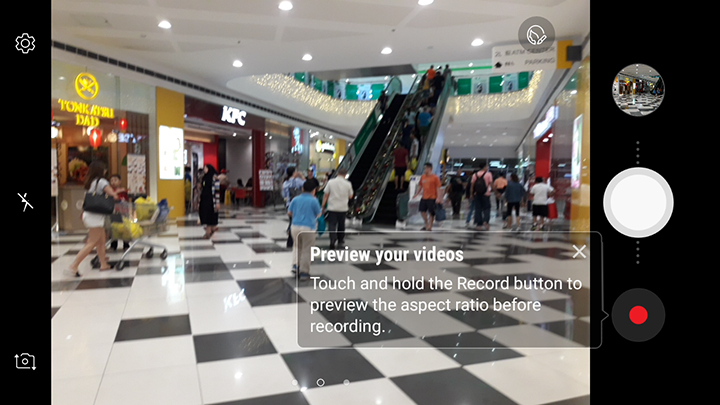 Its 5-megapixel front camera packs a few features found in other selfie-centric smartphones such as fixing your skin tone. Its dedicated LED flash is quite bright and does a good job at filling up light in most dark scenarios. It doesn’t have a wide-angle lens, though, and might require you to stretch your arm when you want to take a group photo with your friends. Here are some sample photos:

Videos captured with the J7 Core are recorded in MP4 format at a maximum of Full HD resolution at 30fps with stereo audio. The video, surprisingly, takes better light than most of the photos we’ve taken with decent amounts of saturation, brightness, and contrast. Here’s a sample clip:

Android Nougat runs the show when it comes to software, although it’s baked with Samsung’s very own TouchWiz UI that could be a good option for ease of use or a deal breaker for not putting in a pure Android interface. TouchWiz has improved a lot from previous iterations and feels seamless as you swipe along menus and settings. A swipe right at the Home Screen reveals Briefing, a feature that brings you related content such as news, weather, and other essentials you need to get through the day. 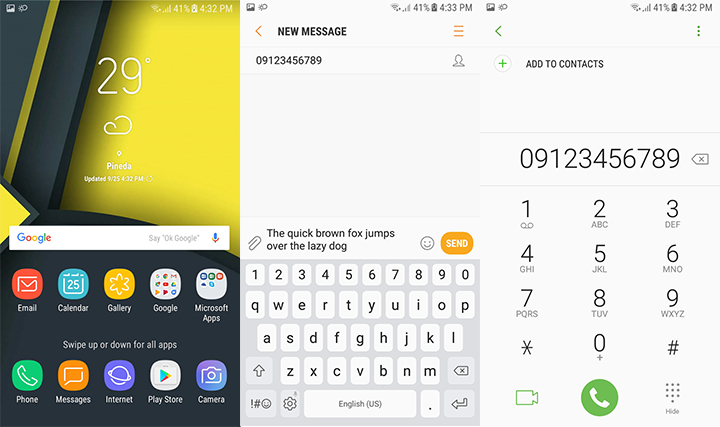 Pre-installed apps also come with the device such as a plethora of apps from Samsung, Google, and Microsoft, as well as social media app Facebook and internet data saving tool Opera Max (which is already discontinued). This leaves you with around 8.5GB of free space from the 16GB internal storage for other apps. Good thing there’s a microSD card slot to store all your multimedia content. Despite what seems to be a measly 2GB RAM, the octa-core Exynos 7870 does a decent job in dealing with multiple tasks provided. There’s also a feature derived from Samsung’s flagship devices, and that is a dedicated game launcher app that compiles all your games and gives you quick access to game tools and toggling the settings to provide a better performance while playing your favorite mobile titles. 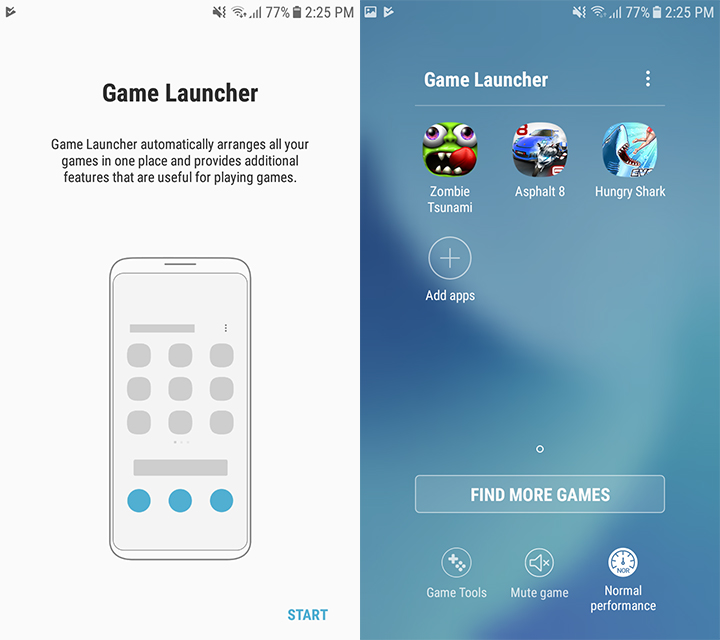 As advertised, online games such as Mobile Legends, Hungry Shark Evolution, Zombie Tsunami, and even Eternity Warriors 4 run fairly well without any hiccups in gameplay. It can’t be said the same for other games that run on higher graphics requirements such as Asphalt 8 which does have a few frame skips or lags at times. When used a lot, the device warms up at the upper part of the back, around the camera module.

Here are some sample benchmarks: Most of the wireless functions work well — calls received has a decent volume, while the microphone records decent audio and is not that noisy despite the lack of noise cancellation. The WiFi, GPS, and Bluetooth also work as advertised. Our sensor test, though, revealed that it doesn’t pack a lot of sensors even the essential ones. We’re also a bit disappointed to see a lack of gyroscopic and orientation sensors as these are helpful in some apps and games. Two battery saving modes are present on the J7 Core: One removes all the background apps and keeps most of your applications intact, while the most drastic setting keeps your phone to a stripped-down, no-nonsense minimal feel with basic functions intact, along with four other apps of your choosing. 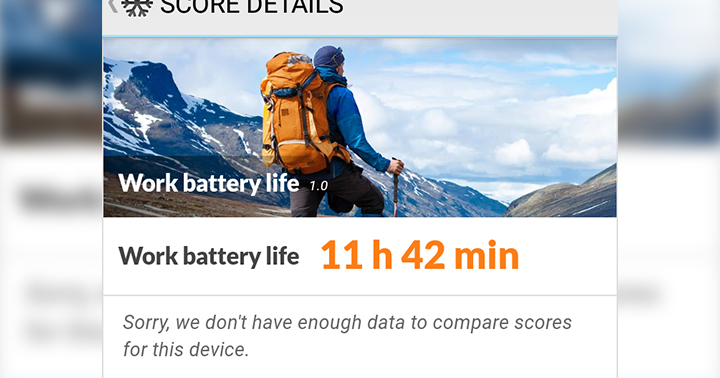 Despite sporting a 3000mAh battery, the J7 Core impressed us with a longer-lasting battery life at 12 hours consisting of calls, emails, and SMS, as well as casual playing for 2 hours with 10% still remaining by the end of the day. This could be variable if you are to install resource-hogging apps such as those from Facebook and the accompanying Messenger app which takes the battery life down to around 7-8 hours of use on a single charge. The phone lasted for around 11 hours and 42 minutes using our PCMark battery test, while our video loop test yielded 14 hours and 31 minutes.

The Samsung Galaxy J7 Core may look like something you’ve seen from the company’s previous Galaxy J offerings, but the device is capable of handling games as advertised and presents itself with a good battery life on top of a good Super AMOLED display and a better version of TouchWiz over Android which we have seen with this year’s releases from the Korean juggernaut. 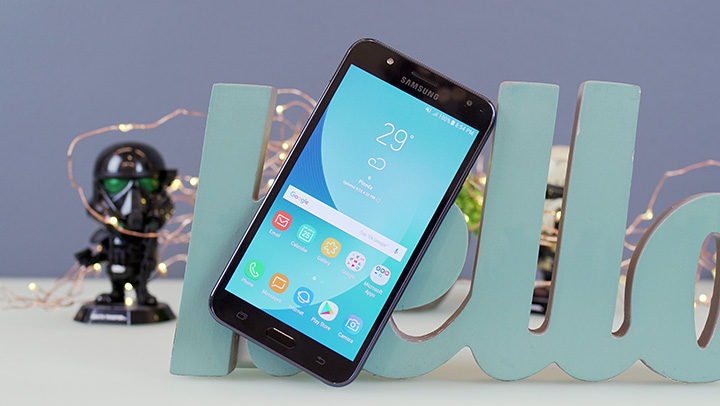 Despite being advertised as a gaming phone, Samsung deliberately removed a few essential sensors that could’ve made this a better gaming device than it currently is. There’s that camera that’s quite a hit or miss, and the fact that the device sports an old design that can be boring to some users.

With that being said, the Php9,990 price tag may look a bit too steep considering the competition with better specs such as those from OPPO, Vivo, Xiaomi, Huawei, and ASUS, but there’s something about this device that could make this yours this holiday season and that’s the experience it provides.

What we liked about it:
– Decent performance given its specs
– Good battery life
– Good display

What we didn’t like:
– Price seems a bit too steep
– Lacks essential sensors
– Device design is not entirely made for one hand operation

I’m kinda disappointed about the design. It should have been followed on the J2 and J7 pro 2018.

I hope u have a review j7 core in youtube

How about the charge time? How long does it take to charge this phone from 0-100%?