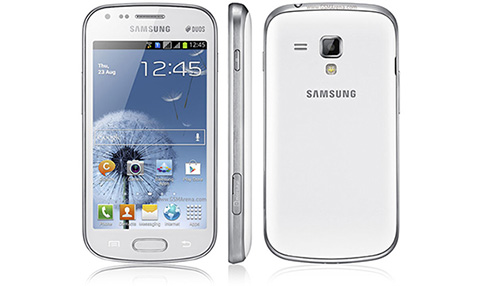 For starters, the Galaxy S Duos has a 4-inch WVGA TFT display with 233 ppi pixel density and is powered by a 1 GHz ARM Cortex-A5 processor with a Adreno 200 GPU under the hood. It features a Smart Dual SIM function which allows both SIM cards to be active at the same time. It supports 3G and HSPA but won’t allow two data connections simultaneously. 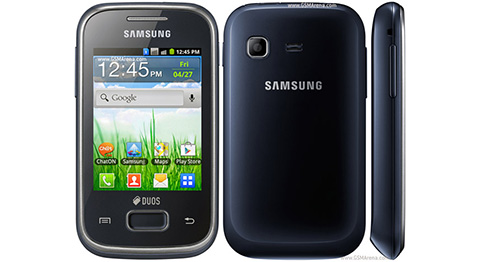 The Galaxy Y Duos Lite or the Galaxy Pocket Duos, as the name suggest is a lightweight smartphone both in specs and price range. It carries a 2.8-inch QVGA display, a 832 MHz ARM 11 processor, 3GB of internal storage, 1200mAh battery and Android 2.3 Gingerbread. 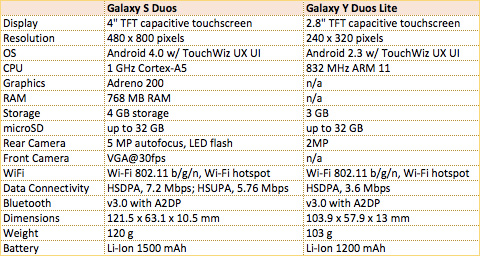 It also has the same Smart Dual SIM function as the S Duos. It supports 3G connections but only on the primary SIM.

I’m excited to discover this site. I want to to thank you for your time for this particularly wonderful read!! I definitely liked every little bit of it and I have you bookmarked to check out new things in your web site.

Kailan ang availability nito? I want to buy samsung galaxy y duos lie.. This is my gift for myself this christmas..

cna’t wait for galaxy s duo. any news when it is likely to hit philippine shores?

3G on only 1 SIM makes these dead to me. Japan is 3G-only, data AND voice, and in the US more and more carriers are starting to shut down the GSM side of their networks too.

HI, I would like to ask if its better to buy a huawei modem or i just use the 2nd slot sim for dual phones such as this galaxy duo for my internet sim? For sharing to my kids the internet (hotspot)? Which is better in terms of battery life? Speed of internet? Thanks.

i will never buy another samsung phone again, never.it’s just a waste of money to buy one. cheap looking phones, poor battery life, an ugly icons. come on now.

@alvinjane I share your sentiments about Samsung. Their entry level and mid-range phones are a bit pretty much overpriced because they know they are very popular in the market. There are a lot of better phones out there with better prices for the right specs.

Price is a bit high for local consumers though. They might lower it down few months after the release.

I see similarities between Galaxy S Duos and Galaxy S3. Galaxy S Duos’ looks might be a selling point for me because it really looks like a miniature version of the Galaxy S3.

The one mentioned above is Samsung Galaxy Y Duos LITE or in other country Samsung Galaxy Pocket Duos..and different on Galaxy Y duos we currently have on the Philippines..

Hi sir yuga, can you please make a review about Lenovo p700i? I’m really excited about this phone. Thanks!

The price for the S is a bit high but what the heck, it supports dual sim.