Barely 7 months after announcing the Xperia Z2, Sony suddenly unveiled the Xperia Z3 as its successor. That’s two flagships in just a year, probably a first in any global brand. Check out our full review of the Sony Xperia Z3 below.

Looking back at the Xperia line, it’s very obvious that Sony has stuck it out with their design signature and continuously improve upon it. The Xperia Z3 is positioned to be a refinement of both the hardware configuration and design of the Z2. 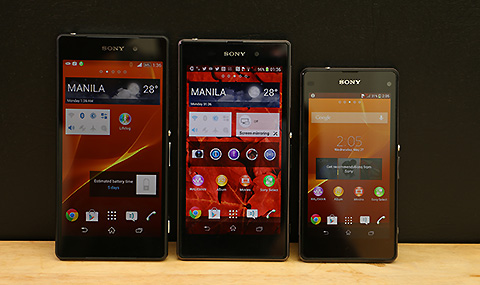 It took Sony about 7 months to release a new successor to their Xperia Z2 smartphone. The Z2 was announced in Barcelona in February then the Z3 was announced during IFA in Berlin last September.

That’s more or less close to 6 months between the two of them, the shortest time we’ve seen a flagship handset is replaced by a newer and better one. It’s an impressive feat but something that’s also risky for the brand to overshadow its own hero product. 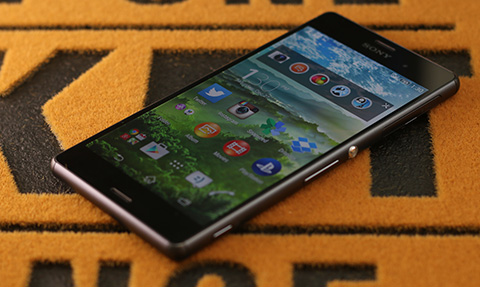 Before we proceed to the details below, do check out our full review of the Xperia Z2 to get better perspective.

Sony did not apply any radical changes on the design of the Z3 which is understandable since its predecessor is barely a year old. This is not to say the the Z3 has not aesthetically improved. Physically, it is actually more refined which is evident when holding the device. 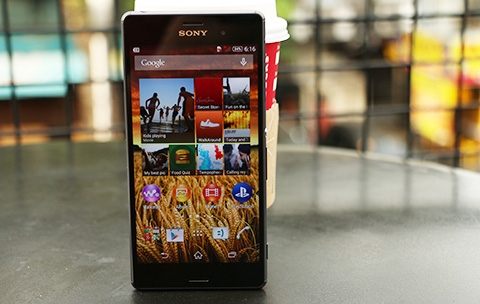 The Z3 has smooth curved sides unlike the Z2 which has chamfered edges. This is actually the “refined” part of the Z3 as its frame is now shorter, narrower, thinner, and lighter than its predecessor. The only disadvantage we see in this design is that it is harder to grip which increases the chances of it falling from your hands. Although very lean, the metal-clad and glass construction of the Z3 still looks very much premium.

At the front we have the 5.2-inch Full HD IPS display with a pixel density of 424ppi. Above it are the earpiece, the 2.2-megapixel front camera, and the light and proximity sensor, while down below is the front-facing speaker. Found right on top of the device is the water-resistant 3.5mm headset jack. On the left-hand side are the microUSB port hidden by a water-sealed flap and the magnetic charging port, while the opposite side has another flap which covers the microSD slot and nano-SIM tray, the power/lock button, volume rocker, and the dedicated camera button. Flip it on its back and you’ll see the 20.7-megapixel rear camera, LED flash, and NFC.

Due to the glass-on-glass material design of the Xperia Z3, it is slippery on the hands (especially if you have a sweaty or oily hands) and begs to find a suitable protective case with more texture and grip. It’s the same sentiments we’ve had with the previous Xperia line-up.

The IP55/58 rating allows you to submerge the device under fresh water down to 1.5 meters deep and up to 30 minutes. It can also survive jets of stream at certain tolerable pressure. The flaps need to be sealed tight though, otherwise the warranty might be voided. 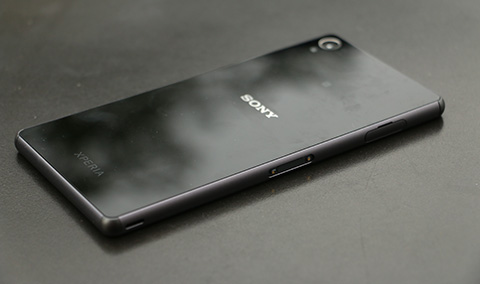 One thing to note is that the IP rating is intended for situations or conditions that might normally deem a typical handset unusable. This does not mean though that you have to always test the limits of its resistance every chance you get. This is perhaps one of the main reasons why water-resistant smartphones like the Xperia Z3 occasionally, and accidentally, get water-damaged.

The Z3 also uses a nano-SIM instead of the micro-SIM to make for a little more space.

Being one of the top producers of TV displays int he world, Sony has leveraged its development of the Triluminous display and employed the same with their smartphone. The Xperia Z3 is among the few they’ve used it so far. This produced great results in terms of color quality, depth, contrast and clarity of the display. Couple that with a full HD resolution and you have an impressive combo. We noticed very rich, deep dark colors with a balance of saturation that makes images looked very natural.

We also like the idea that not only can you adjust the brightness of the display but also the white balance (by giving you manual control of how warm or cold the white screen should be with an RGB slider in the settings). 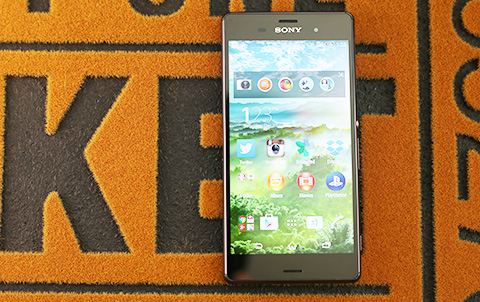 The display on the Z3 has better contrast and visibility under direct sunlight compared to the Z2. Both have the same display size at 5.2 inches but the Z3 has a higher screen-to-body ratio, narrower bezels in a slightly compact body. The large display makes it more ideal for web browsing, watching movies and playing mobile games.

The Z3 came with Android Kitkat right out of the box and, along with it, all the optimizations and features added by Google. Sony included a slew of enhancements, of course — like smart backlight, glove mode, double-tap to wake, LED notification, PS4 streaming. The UI is simple and uncluttered, even the shortcuts from the dropdown settings menu at the top. The standard soft buttons at the bottom corner are Back, Home and Recent Apps with another row of shortcuts to most frequently used apps and notifications right above it.

The App Drawer has some simple yet clever app management filter which allows you to arrange all the apps alphabetically, by recency or frequency of use. It can be confusing at first but works really well once you get used to the idea. The interface is clean and simple, the same UI as with the Z1. Where Sony placed a lot of effort is in the multimedia where the Walkman app, the Album and Movies all have visual cues and refinements.

Sony started off with their Xperia smartphone as both water and dust resistance, an effort that paid off a lot and also being emulated by the likes of Samsung in their Galaxy S5. This direction create a solid following for the Xperia that is dominated by folks who are more outdoorsy and tend to get their hands dirty. 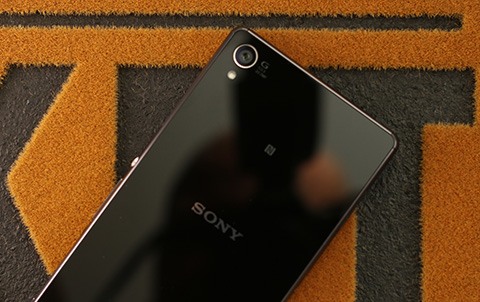 The IP65/68 rating allows you to submerge the device under fresh water down to 1.5 meters deep and up to 30 minutes. It can also survive jets of stream at certain tolerable pressure. The flaps need to be sealed tight, otherwise the warranty might be voided.

Here are sample photos we tooks using the rear camera:

There is a dedicated camera shutter on the side to you are able to take shots even when it is submerged underwater. The camera lens are the rear is flushed way near the corner that we often accidentally block the camera when rushing a quick shot.

The camera has a plethora of features that one can hardly use but they’re there just in case you fancy them. It has 8x digital zoom, HDR capability for both photos and video, image stabilization, object tracking, smile shutter, face detection, burst mode and video capture at 4k resolution.

We especially liked the Smart Defocus which blurs out everything else in the background except the focused subject.

Perhaps the most interesting of all features introduced with the Z3 is Remote Play. Sony’s PlayStation 4 console has the ability to wirelessly stream games to other Sony devices like the PS Vita and PlayStation TV. The Xperia Z3, along with the Z3 Compact and Z3 Tablet, also supports Remote Play. Just attach it to a Game Control Mount and you’re playing your favourite console games on the smartphone.

With a newer Snapdragon 801 chip, the Z3 is expected to perform slightly better than the Z2. While we could not really distinguish the difference in terms of normal usage, the benchmark scores showed the performance improvements.

Over-all scores of the Xperia Z3 were higher than its predecessor while some results remained the same, like Nenamark 2 which tested the graphics side only.

Overall, call quality is very good. Reception is clear and crisp. The all-glass body didn’t seem to interfere with radio signals so we get good WiFi and cellular signal strengths most of the time. Sony also added features like noise suppression and voice enhancement to the mix.

As for connectivity, Sony is looking at making all of their products inter-connect smoothly and, as such, makes a lot of effort in this department. It does all of the usual options like WiFi, LTE, GPS, NFC, Bluetooth but there’s more — MHL, DLNA and Miracast with features like screen mirroring. 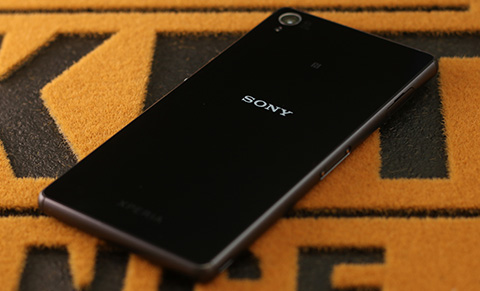 And, as previously stated, the Z3 also allows you to stream your games from your PlayStation 4.

As for the battery life, we managed a day and a half of moderate use with mixed connectivity between WiFi and LTE. In our standard benchmark test, the Xperia Z3 got an average of 11.5 hours on a single full charge with brightness at 50% and volume at 0%. That’s pretty impressive considering the Z3 got a reduced capacity from 3200mAh to just 3100mAh.

Sony’s strategy of introducing two flagship smartphones in a single year is the fastest we’ve seen in any global brand. While competing brands do this once a year, Sony is pushing a cycle that could disrupt the market. It’s both a bold and risky move but something that might pay off for Sony and the Xperia brand.

Had the Z3 been introduced 12 a month after the Z2, it might not have as much impact as it did this year. It looks better, performs faster and, even if it came with incremental improvements, is laudable given the 6-month time-frame. Sony obviously pushed their product cycle ahead of time to produce a proper Xperia flagship device to compete with other flagship handsets for 2014. 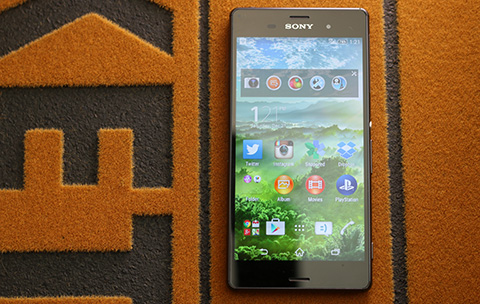 One may not be fully convinced to upgrade to the Z3 if you’re coming from a Z2, considering the time difference in their release date and the price. However, it’s a totally worthy upgrade from the Xperia Z and definitely a good buy for first time Xperia owners.

The Xperia Z3 remains to be one of the most gorgeous and well-designed smartphone ever made. The great hardware, impressive performance, connectivity with other Sony devices and appliances are all packed in a sleek, weather-proof, glass sandwich body. One can no longer ask for anything more.

The Sony Xperia Z3 has a suggested retail price of Php36,990 and comes in four colors – white, black, green, and copper. Smart is also offering the handset for free if you apply for Data Plan 2000.

What we did not like:
* Slippery on the hands
* Quite expensive