The Xperia ZR is Sony’s third offering for its Z family of smartphones. It combines the waterproofing capabilites of the Xperia Z and the plastic (but less fragile) backside of the Xperia ZL. Find out if the ZR is the best bet by reading our full review below. The ZR carried with it the signature design that the Z is known for. However, since it doesn’t carry a glass backplate and isn’t as slim as its bigger brother, the ZR is less edgy and feels more rounded. Like a Z with baby fats if I’m going to put it simply. 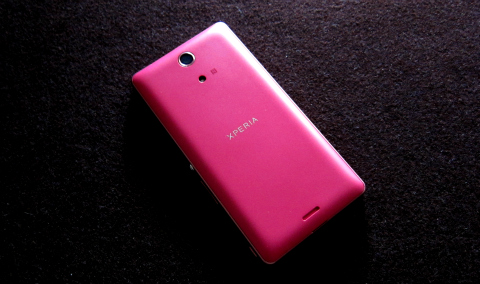 Found on the front is the 4.55-inch display which is a bit smaller compared to the Z and ZL. Right above it is the earpiece and the VGA front-facing camera while down below is the notification light that gives out a nice glow. On the left side are the microUSB port covered by a plastic flap for waterproofing and two metal contacts for the dock. On the right side are the power/lock button, the volume rocker which oddly placed on the lower half, and the dedicated camera button. Right on top is the headset jack which is also covered by a plastic flap while right at the bottom is the microphone and the provision for a wrist strap. Flip it on its back and you’ll see the 13 megapixel camera, LED flash, and the speaker down at the bottom. 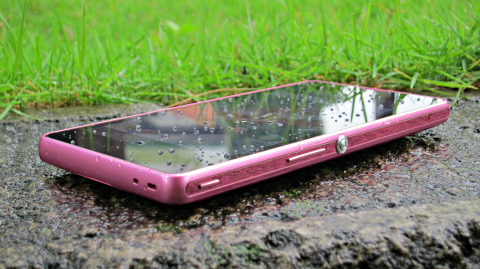 As mentioned earlier, the ZR feels chunky compared to the Z and the ZL. True enough, it’s the thickest of the group at 10.5mm (Z – 7.9mm, ZL – 9.8). But this is not to say that there’s nothing to be admired about the ZR’s body. On the bright side, it’s the smallest of the group and the slight bulkiness actually makes the ZR easy to grip. On the other hand, the backplate’s matte finish feels nice to the touch. To top it all off, the ZR is IP58-certified meaning it can take on a dust storm and high water.

The Xperia ZR is equipped with a 4.55-inch TFT HD (720 x 1280) display which equates to a pixel density of 323ppi. While the resolution is great, the TFT panel may not be much of a crowd-pleaser. The ZR’s screen is reflective and suffers a lot outdoors especially during a bright sunny day. This can be a real drawback since the ZR’s dust and waterproof capabilities suggest to be used outdoors for some frolicking under the sun. 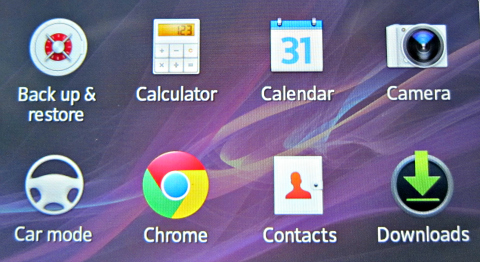 On the bright side, the ZR’s display is bright and crisp while the colors have the right amount of punch thanks to the Mobile BRAVIA Engine 2. In fact, you’ll hardly notice that you’re staring at a TFT screen when viewing it indoors. Although IPS still remains superior, the ZR’s screen can still be considered great.

The Xperia ZR comes with Android 4.1.2 Jellybean on board skinned with Sony’s Timescape UI. Sony did a good job in keeping their UI consistent across their Xperia devices. 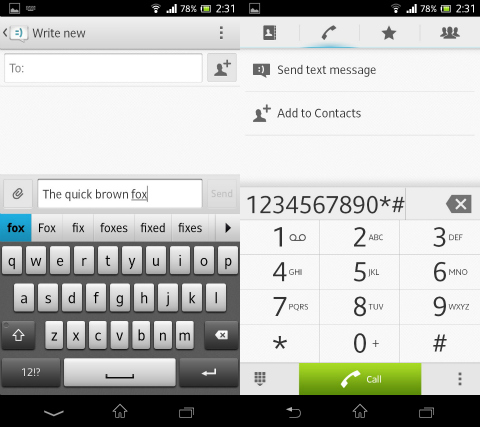 Being an Android device, you’ll see all the basic Google goodies preinstalled with the addition of Sony’s own apps like Wisepilot, Socialife and Sony Select. Third-party apps are also present like AASTOCKS, File Commander, McAfee Security, Office Suite and Neo Reader. The good news is most of these apps can be uninstalled (except for McAfee) thus giving you more control of the more than 4GB of usable internal storage.

Like the Z and the ZL, the ZR is equipped with a 13.1 megapixel shooter coupled with a VGA front-facing camera. While the front camera leaves a lot to be desired, the rear camera on the other hand is impressive. It locks in fast and shoots quick. 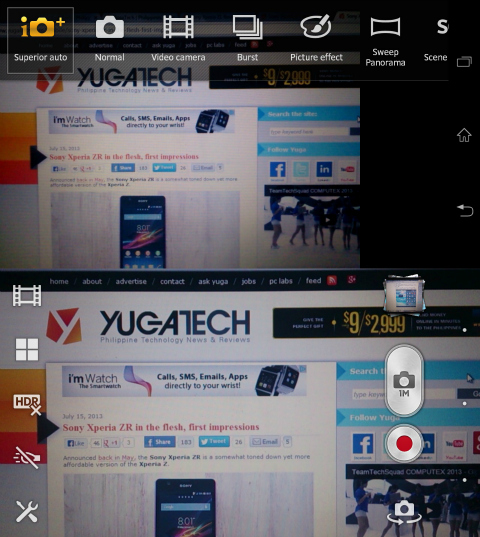 The camera has a number of useful features to take advantage of the camera such as Superior Auto, Burst Mode, Picture Effect, HDR and Sweep Panorama. In addition to that, the camera also works wonders even when under water. Take a look at the sample shots below:

As for video recording, the ZR is capable of shooting videos of up to 1080p resolution at 30fps. It can also shoot stills while recording but you’re limited to 1280 x 720 images. To top it off, Sony threw in HDR video functionality to help you record those moments in tricky lighting conditions.

The only problem I experienced when using the ZR’s camera is that the display isn’t very responsive when wet. To make things worse, the screen registers splashes of water as touch which interrupts whatever it is that you’re doing.

Like the other Zs, the Xperia ZR is a multimedia powerhouse. Although it has a TFT screen, it’s still a joy watching full HD videos on it. The speaker is very audible and can easily fill a small room. Sounds are crisp and clear but the bass needs some boost. Don’t forget to pat it dry though if it just came from a short trip in the water as the droplets muffle the sound pretty well.

Keeping things zippy inside the ZR is Qualcomm’s Snapdragon APQ8064 quad-core 1.5GHz CPU, Adreno 320 GPU and 2GB of RAM. So far we haven’t encountered any problem during our time with it. Applications open and close quickly while navigation is smooth and fast. We did our usual round of benchmarks with the ZR and here are the results: 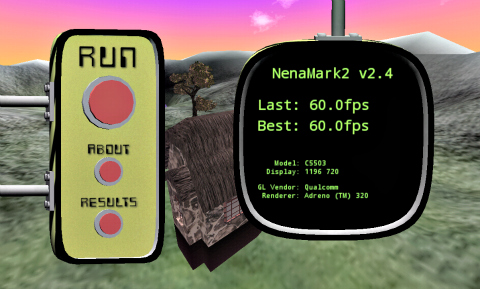 The ZR fared closely with the Z and ZL in terms of benchmark performance but came out on top when it comes to AnTuTu.

The ZR is equipped with a removable 2,300mAh battery which is the smallest compared to the Z and ZL. With regular use which consists of constant WiFi connectivity , heavy SNS, moderate texting and light calling and gaming, the ZR was able to last a whole day. 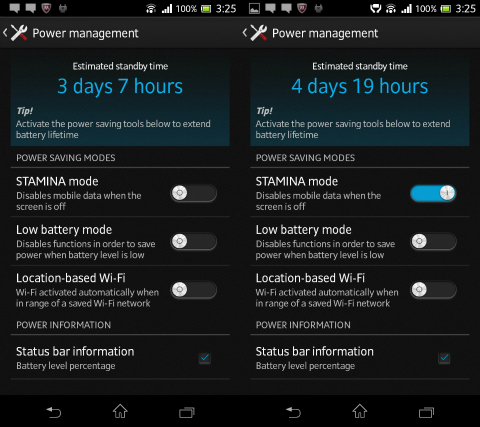 As for video playback, the ZR is capable of 7 hours of continuous full HD playback in Airplane mode at 0% volume, 50% brightness and Mobile BRAVIA Engine 2 activated, which is really great. 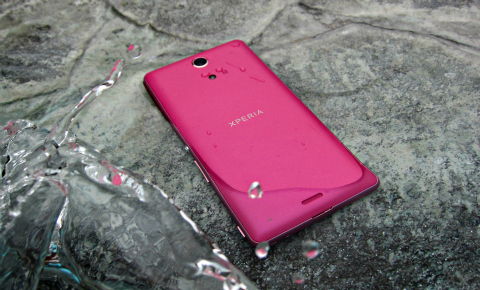 The Xperia ZR is for those who prefer an IP58-certified smartphone but don’t mind missing out on the 5-inch full HD display and glass back of the Z. So if your preference falls in the latter description, then the Sony Xperia ZR is the right phone to choose.

What we liked about it:
* Great build
* IP58-certified
* Good camera
* Great performance
* Good battery life
* Cheaper than the Z and ZL