It’s the battle of the most affordable 18:9 display smartphones to date! We have Cloudfone’s Thrill Boost 3 and the recently-announced myPhone myX1 in this comparison, and we’ll see which one looks better on paper. 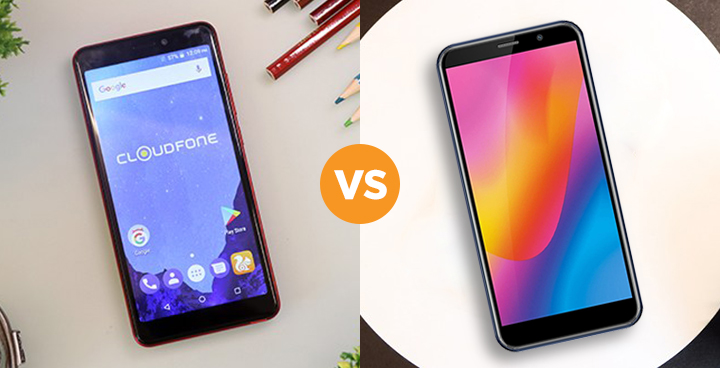 If you’re a fan of larger things, Cloudfone’s Thrill Boost 3 has a 5.45-inch display in an 18:9 resolution that is almost the same size as most 5.2-inch devices, which makes it easy to hold. The same feel can be experienced with the myPhone myX1 but the smaller 4.95-inch screen is similar to a 4.7-inch device when held, which is far more compact and easier to navigate with one hand. Both offer the same resolution at 960 x 480px, which makes the myX1’s display denser and sharper at 217ppi than the Cloudfone’s 197ppi.

The MediaTek MT6580 in the Thrill Boost 3 is an inch better than the Spreadtrum SC7731C in the myX1– both are quad-core chips with the same architecture but offer different clock speeds at 1.3GHz and 1.2GHz, respectively. The former also offers better graphics capabilities with a dual-core GPU (Mali 400-MP2) while the latter offers only a single-core graphics hardware in its Spreadtrum SoC (Mali 400-MP1).

While both devices sport five-megapixel camera resolutions both at the front and rear, Cloudfone and myPhone offer different setups. The Thrill Boost 3’s lenses have their own dedicated LED flashes which could be advantageous for those who love taking selfies, though some may find the fixed-focus mechanism a bummer. The myPhone myX1, on the other hand, has an autofocus rear shooter while the front module does not have a dedicated LED Flash.

Most of the other internals are just about the same, except for small differences in Bluetooth (4.2 vs 4.0) and battery capacity (2,500mAh vs 2,150mAh). MyPhone also has USB-OTG function with the myX1, making it compatible with their own DTV dongle if you’re a fan of watching television shows on the go.

The Cloudfone Thrill Boost 3 is available for Php2,999, while the myPhone myX1 is more affordable by a few hundred bucks with a Php2,799 introductory price. Which one would you pick? Let us know in the comments section below.