With new selfie-centric smartphones coming out left and right, we will now compare three newly released offerings packing 18:9 screens and good front cameras. Which smartphone do you think will win based on specs? Let’s find out below. 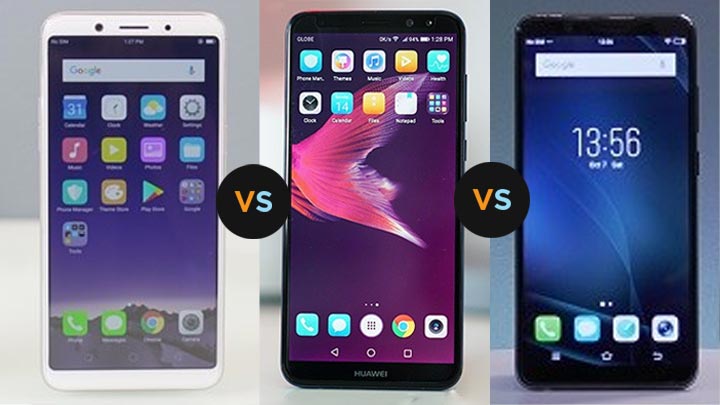 The OPPO F5 recently launched in the Philippines. It has a 6-inch display with 18:9 aspect ratio and 2160 x 1080 resolution, MediaTek MT6763T or Helio P23 octa-core chipset, 32GB internal storage, 4GB RAM, a 16MP rear camera with LED flash, a 20MP front camera with AI Beautification Technology and screen flash, and a 3,200mAh battery.

The Vivo V7+ has been released last month and is the flagship smartphone of the company. It has a 5.99″ FullView display with 18:9 aspect ratio and 1440 x 720 resolution, a Snapdragon 450 chipset, 64GB internal storage, 4GB RAM, 16MP rear camera with LED flash, a 24MP front camera with Moonlight Glow, and 3,225mAh battery.

Here are the advantages from each smartphone.

(Author’s note: We will be updating the comparison for the CPU after we release our review for the OPPO F5)

Comparing the three smartphones, here are the similar and lacking specs from each other:

When we check out which smartphone has the better viewing experience, then both F5 and Nova 2i will be the right pick for that, although the latter does not have any Gorilla Glass protection. When choosing the overall display specs, including screen protection, the F5 has the upper hand here.

The OPPO F5’s processor is new and is still uncommon in the market but its Helio P23 chipset seems to have promising speed and performance but we can only make sure once we have tested it. We’re leaving it out for now so make sure to look out for our review in the coming days. We have made a comparison for the Nova 2i and V7+ and we have proved that the former has a better performing CPU with its Kirin 659 chipset as compared to the V7 Plus’s Snapdragon 450 chipset. For their gaming potential, the F5 has the best GPU since it is equipped with a Mali-G71 which is the same GPU used on the Huawei P10, the company’s flagship smartphone.

Based on 3D scores, the F5 got the highest score, followed by the Vivo V7+ with the Nova 2i trailing behind.

Only the Nova 2i has a quad-camera setup consisting of dual rear and front cameras, with the front capable of producing a “bokeh” effect. The F5, on the other hand, only has a single camera but uses a special software called AI Beautification Technology, allowing it to produce better beauty and depth effects compared to its predecessors. As for the V7+, it has the advantage in terms of camera resolution.

We do not have a direct comparison yet between the three yet but you can check out our sample photos for the F5, Nova 2i, and V7 Plus in the links that we have provided.

The F5, Nova 2i, and V7 Plus carry 3,200mAh, 3,340mAh, 3,225mAh batteries respectively. Their capacities are close but the phones differ in power consumption.

Comparing the PC Mark battery test of the other phones, the V7+ lasted the longest at 16 Hours and 13 Minutes , followed by the OPPO F5 at 13 hours and 8 minutes with the Nova 2i only lasting for 8 Hours and 46 Minutes. This can be attributed to the V7+’s low screen resolution and power-efficiency of the 14nm Snapdragon 450 chipset. None of the devices feature fast charging tech.

We will need to take note of the other features that a smartphone has in this comparison. Both F5 and V7+ have Gorilla Glass Protection, a dedicated micro-SD card slot, Gyroscope sensors, and facial ID scanners while the Nova 2i doesn’t have those. These hardware specs can affect your decision as a buyer depending on which features are most important to you.

Which smartphone do you think will fit your style? Let us know your thoughts in the comment section below.

so what the best phone in three ?
What the gorilla glass? And normal glass?

got my oppo f5 yesterday. It works good.

got my nova2i yesterday and so far so good. very happy with how fast it is, it doesnt look or feel like a cheap ass phone, and the camera’s pretty good. yun lang parang matagal lang sya mag charge? havnt tried to fully charge it yet though. yun lang sad to know di pala sya gorilla glass as expected ko na it should come as a normal thing with smartphones now a days.

I have already bought the Nova 2i, and for me, its the best of the three.

What is the use of a Gyroscope? Is this a must have feature when you are considering a better smartphone?

It’s for navigation purposes. Applications like “Pokemon Go” uses this technology which determines your location and orientation in which way you’re facing.