Xiaomi recently surprised the world by launching the Mi Note 10, a smartphone that had five rear cameras, with one of them being a 108MP lens. Under the hood, though, the smartphone has less-shocking elements: 6GB RAM, 128GB storage, coupled with a Qualcomm Snapdragon 730G chipset. We matched it up with one of OPPO’s recent release, the Reno2, that has a shark-fin style pop-up camera and also runs on the SD730G processor. See how they fare against each other. 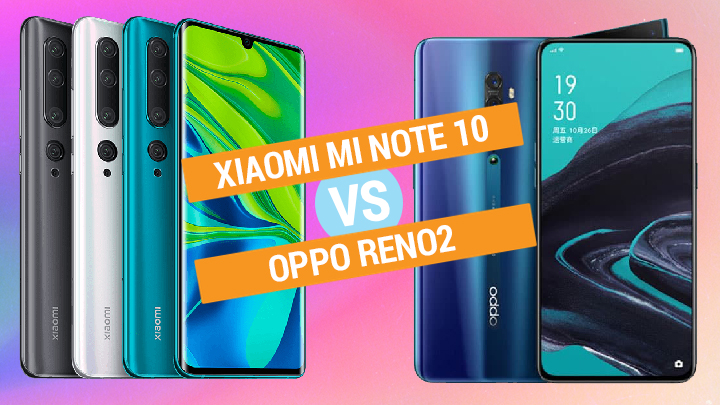 Beginning with the display, the Reno2 has a slightly larger screen, measuring at 6.5-inches, in contrast to the Mi Note 10’s 6.4-inch panel. The Mi Note 10’s screen is curved on the sides, allowing the smartphone to have pretty slim bezels. On the other hand, the Reno2’s pop-up mechanism allows the smartphone to have an almost full-screen display.

Powering up both devices is a Qualcomm Snapdragon 730G chipset, paired with an Adreno 618 GPU. The Mi Note 10 has a 6GB RAM and 128GB storage, while the Reno2 edges it out with its 8GB RAM + 256GB storage offering. Do note, though, that the Mi Note 10 has a Pro version that also offers the same 8GB + 256GB configuration. The two devices are pretty capable of doing basic tasks, such as navigation, web and social media browsing, messaging, and such. Both the Mi Note 10 and the Reno2 do not offer expandable storage.

Front-camera wise, the Mi Note 10 possesses a 32MP shooter, while the Reno2 has a 16MP shark-fin shaped elevating front camera. On the rear side of things, the Mi Note 10 is armed with five cameras, compared to the Reno2’s quad-camera setup. Then again, quantity aside, we can’t say for sure how the 108MP main + 12MP 2x zoom+ 20MP ultra-wide + 5MP 5x zoom + 2MP macro snappers’ quality match up against that of the Reno2’s 48MP main + 8MP ultra-wide + 13MP telephoto + 2MP portrait. We’ll know once we have the devices for a comparison review.

When it comes to battery, the Reno2’s 4,000mAh cell gets dwarfed by the Mi Note 10’s massive 5,260mAh capacity. Both smartphones feature fast charging, with the Mi Note 10 having 30W charging support and the Reno2 with its 20W VOOC Flash Charge 3.0.

The smartphones and are priced as follows:

The Reno2 was given a local launch last October, and while the Mi Note 10 has just been globally introduced, it remains to be seen whether the smartphone will receive a local launch. The two handsets have their similarities along with their novelties; Mi Note 10 has its penta-rear camera setup while the Reno2 comes with its shark-fin pop-up mechanism.

If you’d like a smartphone with a sizeable screen, an elevating camera, and one that’s readily available, get the OPPO Reno2. However, if you’d like to have a smartphone that boasts five rear lenses with a 108MP primary camera and a hefty battery life, wait and see whether the Mi Note 10 will arrive in our shores.