LAVA Ltd., a fairly new smartphone manufacturer headquartered in India was chosen by Intel to sport the first Intel Atom-powered smartphone available in the market. The result of the Intel-LAVA partnership, the XOLO X900, was launched yesterday in New Delhi.

Announced at the MWC 2012, the XOLO X900 didnâ€™t turn too many heads at the event as the spotlight was stolen by Lenovo K800. Under the hood of this affordable smartphone is the 1.6GHz Intel Atom processor Z2460 with Intel Hyper Threading Technology and a 400MHz GPU that should equate to a very nice smartphone experience. 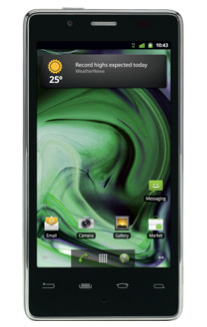 It is also equipped with an 8MP camera that is capable of shooting 10 pictures in a second at 15fps and 1080p HD video recording at 30fps. This handset will also come preinstall with the Android Gingerbread but is said to have an OTA update to ICS in the future.

The XOLO X900 will only be distributed in India starting April 23 with a very enticing retail price of INR22,000 (which roughly Php18,000). Here are the other things that XOLO X900 has to offer:

naturally like your web-site however you have to take
a look at the spelling on several of your posts. Several of
them are rife with spelling issues and I to find it very bothersome to inform the truth however I’ll certainly come back again.

Is this already out here in Philippine market? if not when?

I wonder if this can run windows xp or windows 7… hmmm….

Why buy this if i can buy samsung or LG at the same pricewith same spec. You can buy alcatel or hwuawei at 13k with better spec. If the price is around 10k i might consider.

Well if your a regular tech blog reader, you should have learned about k800 by lenovo, which showcased great potential even it cpu is clocked at 800mhz, which is far better than iphone 4s with its benchmark test. So with that spec at 18k its a big deal specially when compared with iphone 4s.

For sure iPhone and the brands you mentioned will bite the dust! Even they are cheaper they cannot outperform this Indian brand. And not because it’s from India, it’s because it’s run by Intel’s new processor. Haha!