Converge is most consistent fixed internet in six regions for Q2 2021, says report

Converge has announced that is the most consistent fixed internet provider in six regions based on the recent Ookla Speedtest Intelligence analysis for the second quarter of the year. 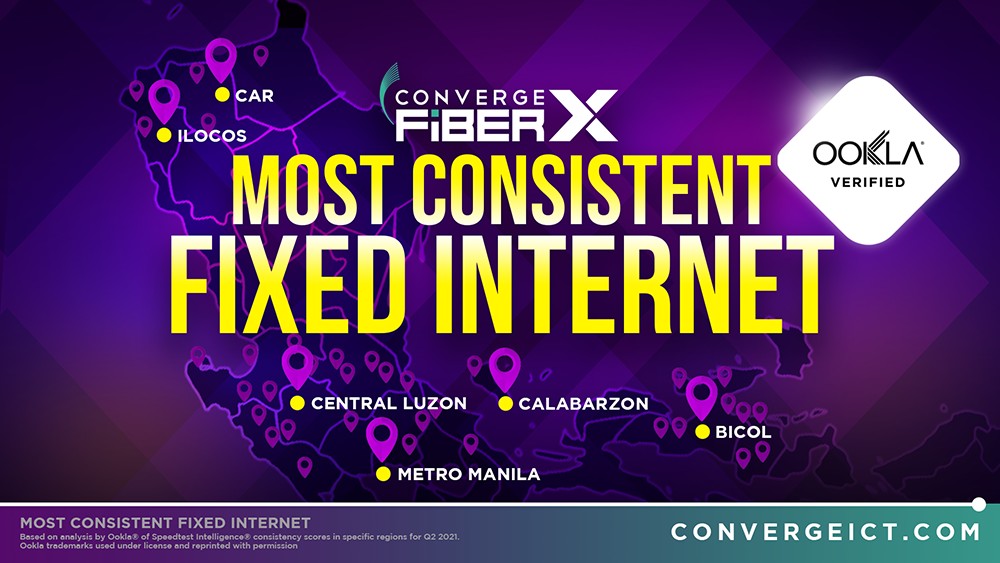 Based on analysis by Ookla of Speedtest Intelligence consistency scores in specific regions for Q2 2021, Converge is consistent in Metro Manila, Calabarzon (Cavite-Laguna-Batangas-Rizal-Quezon), Ilocos, Central Luzon, Bicol, and the Cordillera Administrative Region, with a consistency score of 79.46%. The score measures the percentage of a provider’s samples that equals or exceeds a fixed threshold of 25 Mbps download and 3 Mbps upload.

According to Ookla Speedtest Intelligence analysis for Q2 2021, Converge average internet download speeds for the major regions such as Metro Manila is at 71.22 Mbps, Calabarzon at 74.20 Mbps, and Bicol region at 54.44 Mbps.

In June 2021, the Philippines’ internet ranking went up to 62nd spot with 66.55 Mbps, out of 180 countries in the fixed broadband category. Converge’s average internet download speed is at 78.88 Mbps in the same month.

Consistent no but in collecting bills yes august 19 I pay my bill august 22 no internet connection LOS they say there on it but until now 4:30pm no internet it’s been 15 hrs pass I have a job to to later 8pm and 3am they posting positive about their internet but in the comment over hundreds and thousands of comment are negative

Yes consistent…. If your using LAN cable… Wireless…. Nah you need to restart the router by about 3 to 4 times a day. Direct LAN cable never dies only wireless. So honestly it sucks… Some people will say its ok, just restart your router. Seems simple but if your doing crypto mining and with lots of IP cam that you need to access even your away… I dont think thats any good..