Netflix is a service that requires a fast and steady internet connection to have a good streaming experience. Netflix has released the January 2018 leaderboard for internet service providers in the country based on their performance.

The Netflix ISP Speed Index measures prime time Netflix performance on top ISPs around the world. The list is based on data gathered from users on the site. 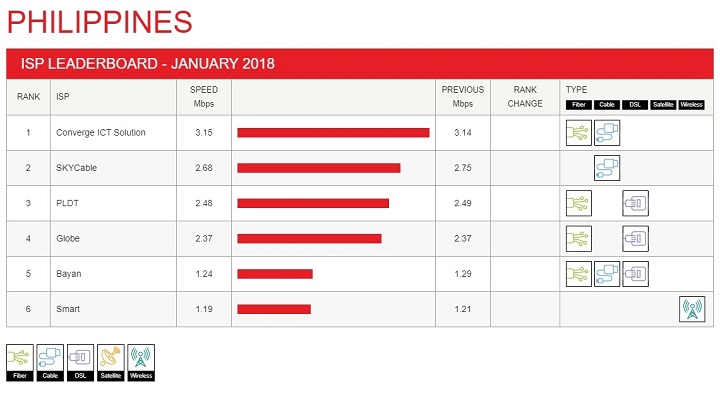 At the top of the leaderboard is Converge ICT at 3.15Mbps. Behind Converge is SKYCable at 2.68Mbps, PLDT at 2.48Mbps, and Globe at 2.37Mbps. The last two at the bottom of the stack are far behind, with Bayan and Smart at just over 1Mbps.

Last year’s Netflix Speed Index has the average speeds of each respective ISP based on all types of connection they offer, so it’s worth noting that this year, Globe’s wireless internet is not included as part of the data. This chart, also based on Netflix’s data, shows that since January 2017, Globe and PLDT’s average speeds have been slowly increasing, Smart and Bayan’s speeds have decreased, and Converge and SKYCable’s speeds have improved.