Sometimes a good sounding speakers isn’t enough. We look at other features and functions that make it great — like NFC, water-proof, dust-proof, and the like. In the case of the JBL Pulse, it’s the LED visualizer that makes it stand among the rest.

The first time I actually saw the Pulse was during CES 2014 back in January when I was invited to visit the Harman exhibit at the Hard Rock Hotel in Las Vegas. 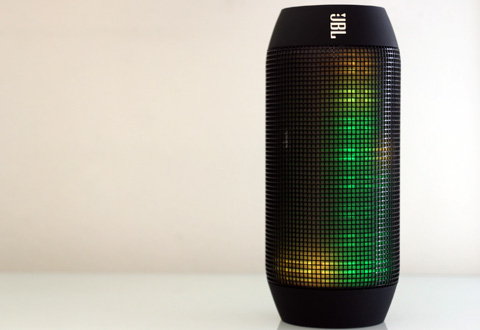 They had the entire ballroom to themselves (separate from the official CES Exhibition Halls) to showcase audio equipments from JBL, Harman-Kardon and Infinity. While most of the cold headphones and speaker were at the Harman/Kardon section, the JBL section had its star player — the JBL Pulse. This cylindrical-shaped speakers is powered by two 40mm drivers and lined with LED lights all around it. The Pulse has NFC/Bluetooth for quick pairing and wireless connection to any media player.

It’s about 3 inches in diameter and 7 inches across and weighs just right. The center part is protected by a metallic mesh wire while the edges are covered with rubber-like material. One side of the metallic mesh has a provision for a rubber stand (for horizontal position) where the micro-USB port is found (for charging) and 3.5mm audio port. 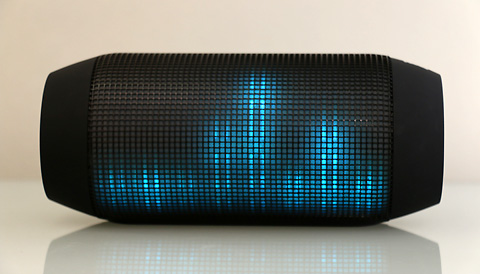 The right side of the speaker is where the power button and Bluetooth is found. There are about a dozen tiny pimples lined up near the corners which are pre-programmed visual themes for the LED lights.

If you have an iOS device, you can also download the JBL MusicFlow app which allows you to program the visual display (Light Editor) to set the color, intensity and speed of the LEDs. It’s a fun way to customize your JBL Pulse. 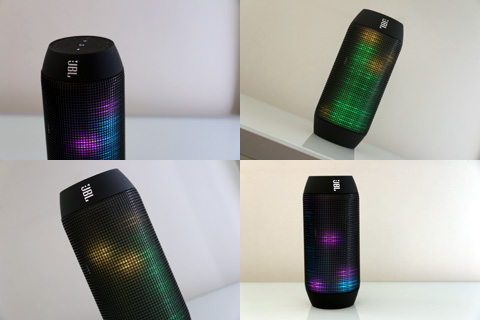 As for the sound quality, we were impressed with the performance of the Pulse. Audio quality is good, clean and crisp. We used it for watching movies and the speaker is perfect for vocal sounds. For music playback, it’s slightly skewed towards the highs but still pretty decent with the mids.

Bass is present but isn’t that exceptional though. For a portable wireless speaker, the Pulse has scored high in our checklist.

To demonstrate how the speakers work, here’s a short video we took while playing several tracks.

While JBL promises up to 10 hours of music playback on a single full charge, activating the LED lights greatly reduces the battery life (almost close to half).

It’s a cool and fun speaker that you won’t hesitate bringing along anywhere you’d go. The combination of good design, sound quality and visual effects places it on top of our choice for a portable speaker.

What we did not like:
* A bit pricey
* LED lights eat up battery too