A new venture group is planning a $20 billion (Php960 billion) project to build an airport and seaport at the Sangley Point. The consortium is headed by the Solar Group and is now joined by Belle Corp., (subsidiary of Henry Sy’s SM Group) — All-Asia Resources and Reclamation Corp. They are joined by several other companies such as Flugfahen Munich (operator of Munich Airport). 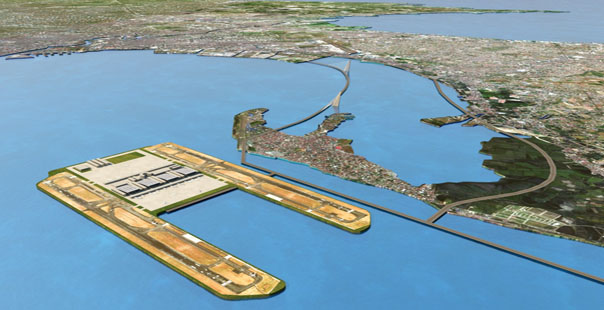 The plan is to reclaim land near the naval base in Sangley point with a total area of about 2,500 hectares. The dual runway system (as shown in photo above) will cost an estimated Php100 billion.

There will also be a railway project that will connect this project to the NAIA network so passengers can easily transfer from one terminal to the other.

The consortium originally submitted their proposal back in 2013 but was ignored and has since re-summited it after Pres. Duterte took office.

This proposed project will be competing with the earlier planned $10 billion (Php480 billion) project by Ramon Ang back in 2014 (near Manila Bay).