Samsung has recently released another model in the S20 series that aims to be a toned-down version of the S20, the Galaxy S20 FE. A year ago, we got our hands on the South Korean brand’s previous flagship, the Galaxy S10+, which delivered an impressive performance. Can the latest base model from the S20 series match to the performance of the brand’s previous flagship? Let’s find out. 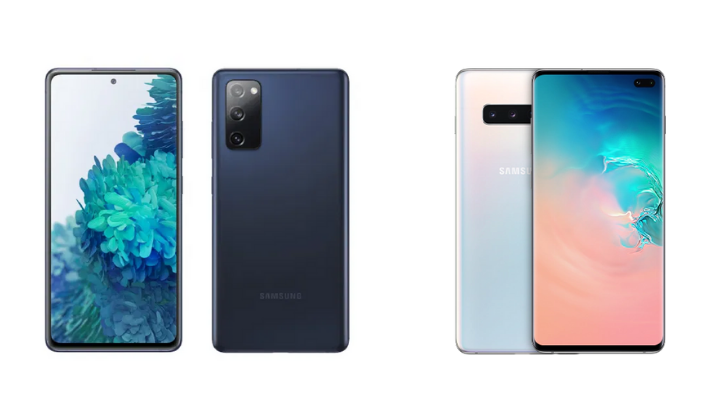 Although it is slightly bigger at 6.5-inch, the Samsung Galaxy S20 FE has a lower screen resolution at FHD+  while the Galaxy S10+ has a 6.3-inch WQHD+ display and a pill-shaped cutout for its dual front cameras. The Galaxy S20 FE, however, has a 120Hz refresh rate and ideal for smoother scrolling, mobile gaming, and streaming and a smaller punch-hole for its single front camera. The S10+ is protected with a Corning Gorilla Glass, while the S20 FE is yet to confirm it. Both smartphones are equipped with AMOLED displays.

For the chipset, the Samsung Galaxy S20 FE differs from its predecessors and previous flagship. Samsung is yet to name the S20 FE’s processor. However, the brand confirmed that it is powered with an octa-core chipset with a maximum clock speed at 2.73GHz based on a 7nm architecture. Meanwhile, the Samsung Galaxy S10+ has the later Exynos 9820 processor. Based on our review, it can handle productivity and mobile gaming at ultra-high settings seamlessly.

When it comes to memory and storage, the S10+ wins with more configurations options coming in at either 8GB or 12GB LPDDR4x RAM mated to either a 128GB or 1TB storage. However, the S20 FE comes in a faster LPDDR5 RAM at 8GB paired with a 128GB storage. Both have support for microSD cards.

Both smartphones are equipped with triple rear camera modules and optical image stabilization (OIS) for its rear wide-angle and telephoto sensors. In terms of resolution, the Galaxy S20 FE features a Dual Pixel 12MP primary sensor, while the S10+ has a 12MP sensor with dual aperture.

As for other sensors, the Galaxy S10+ has a higher resolution for its telephoto and ultra-wide sensors at 12MP and 16MP, respectively. The Galaxy S20 FE, on the other hand, features an 8MP telephoto and 12MP dual pixel, ultra-wide sensors. In terms of zoom, the S20 aces the game with up to 3 times optical zoom and up to 30 times digital zoom versus S10+’s two-times optical zoom.

For the front cameras, the S10+ features dual 10MP primary and 8MP depth front cameras. The Galaxy S20 FE, on the other hand, has a higher resolution for its single front camera at 32MP.

Both devices have WiFi 6, USB Type-C, AKG stereo speakers with Dolby Atmos, and IP68 certification for dust and water resistance. The S20 FE supports 5G connectivity, while the S10+ unit offered in the Philippines only has 4G LTE.

For biometrics, both devices have face unlock and fingerprint scanners, with the S20 FE sporting an optical sensor while S10+ has the ultrasonic one.

Although both support Samsung DeX, the S20 FE offers it wirelessly through Samsung Smart TVs 2019 and up out of the box and Quick Share for wireless sharing of files. To enjoy the same features, those who will purchase the S10+ would need to update the device to OneUI 2.0. Other than that, they share the same features, including Bluetooth 5.0,  NFC, and hybrid, dual-SIM card slot (nano).

The Samsung S20 FE runs on the latest One UI 2.0 that’s based on Android 10. This brings wireless Samsung DeX and Samsung QuickShare for wireless transmission of data within the suggested range to compatible Galaxy devices. As for the S10+, it comes with One UI 1.1 out of the box (Android 9) when purchased. Customers may need to update it to the latest Android 10 software update available in order to enjoy other exclusive features for the One UI 2.0.

On paper, the S10+ has a slightly smaller battery at 4,100mAh compared to the S20 FE at 4,500mAh. Both support Fast Wireless Charging 2.0 and Wireless PowerShare to charge other devices wirelessly. However, the latter supports 25W wired fast charging and PD 3.0 charging. Meanwhile, the S10+ comes with support to Qualcomm Quick Charge 2.0 and AFC.

Samsung is yet to launch the Samsung Galaxy S20 FE in the Philippines, so we’ll need to wait for its official pricing and availability. However, it retails in the US for USD 699 or approximately PHP 34,000. As for the Samsung S10+, its 8GB + 128GB variant was priced at PHP 59,990 at launch.

In terms of upgrades, Samsung’s latest S20 model has more to offer. On the other hand, the S10+ offers better camera features and larger storage. If you’re a camera-centric consumer who doesn’t mind sticking on 4G LTE, values higher display resolution, needs larger storage for multimedia files,  the S10+ is for you. But if you’re the type who wants a responsive display and bigger expandable storage, loves to capture selfies, values 5G connectivity, needs a bigger battery life with fast-charging support, and want to enjoy Samsung DeX wirelessly on select Samsung smart TVs, then upgrading to the Samsung S20 FE should be a no brainer.