Years ago, I sought for a powerful tablet that can help me with work & with play. That was the time I came across the Asus Transformer series which offered the keyboard dock that I needed & the internals that I wanted. Sadly, Android still can’t offer the level of productivity that I needed in a tablet. 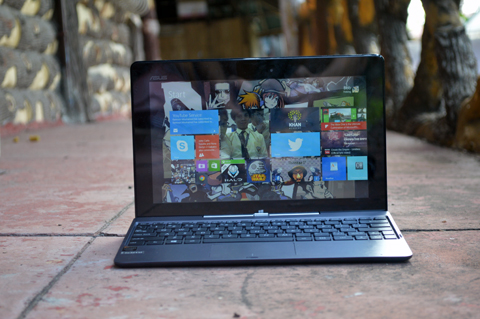 Fast forward to the present, Asus continues the convertible Transformer form factor with the Transformer Book T100. It’s running on Windows 8.1 bundled with Microsoft Office 2013 + the keyboard, and it appears to be no slouch with the internals even with the plastic body. Is it the gamechanger we’ve been all waiting for in the tablet industry? Read on our full review to find out.

Asus kept the circular pattern design from their other products and implemented it on the T100; the only big difference is that it’s glossy plastic. That essentially means that the tablet is prone to capturing fingerprint smudges & that the overall feel & experience is far from premium. On the positive side however, the T100 isn’t flimsy and feels light. In addition, the keyboard dock feels a lot better as it is made out of matte material, giving the whole package a very sturdy impression. The Asus Transformer Pad T100 on our unit comes with a Windows logo in front, which won’t be making it to the final retail unit. Instead, the Start button is found on the left side, below the volume rocker. It’s very hard to press especially when the tablet is lying down on its back as you still have to lift it up. Anyway, you can always access the on-screen Start button through the charm bar so no worries here. Micro HDMI, micro USB & audio ports, the power button and the place for the keyboard dock are also located on the tablet’s sides. 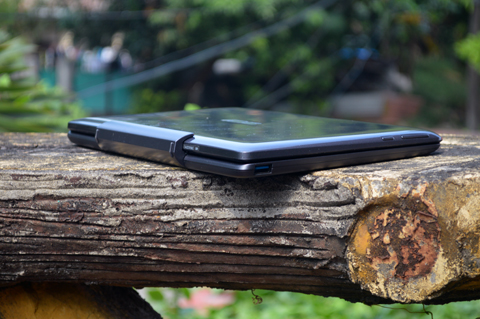 When the keyboard is attached to the T100, it basically makes the whole device something like what you’d expect from a 2013 netbook. It has a very good keyboard for typing and it features a single USB 3.0 port. It’s not backlit, but we’re not expecting that anyway. The extra battery is also gone, making it lighter (you don’t need it anyway, you’ll find out soon enough why).

The only big problem we’ve had with the keyboard is the tiny trackpad. Asus has lots of room for improvement since it’s very jumpy and gives little space for the user. It didn’t cut short with gesture support though, and we can’t deny that the touchscreen offers a lot of flexibility.

With a display resolution of 1366 x 768, you might immediately disregard this tablet for something else – you shouldn’t. It’s an IPS panel and it doesn’t have any bad viewing angles. At 10.1-inches, it fits exactly into both the multimedia tablet division and the infamous netbook group. Colors are vibrant & accurate while at a pixel density of 155ppi, text looked average in clarity. Bring the T100 outside and the screen will surely lose its glimmer; that however is expected of a glossy screen so no surprises here. Anyway, you can still make out with the display even when the T100 is under the sun which is still very good to have.

It’s an iPad. It’s Android tablet. NO! It’s a Windows powerhouse – and we’re not talking about the RT version, we’re talking about no-compromise Windows 8.1. This is what wins it for us. Basically, Windows 8.1 brings a lot of improvement over the first version, but we’re not going to tackle everything here. One of the major improvements was in multitasking – which is easily one of the most useful features you can ever find in a tablet. Asus bundled in some software too, but we don’t think any of those add value; what adds value to the T100 is no other than Microsoft Office 2013. 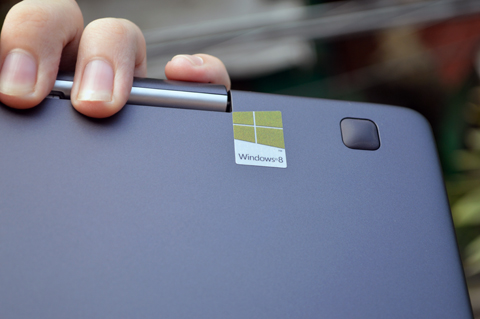 Microsoft Office makes the Transformer Book T100 worth considering for any student or worker out there who just wants to get the job done. Partnered with a keyboard, we don’t think there’s anything that will come close especially with the affordable price point.

Asus dropped the rear-facing camera on the T100 for two good & obvious reasons: first, for cost-cutting & second, you shouldn’t use your tablet as a camera. The front-facing one is kept however, and it does a pretty good job for most cases – selfies or video chatting. 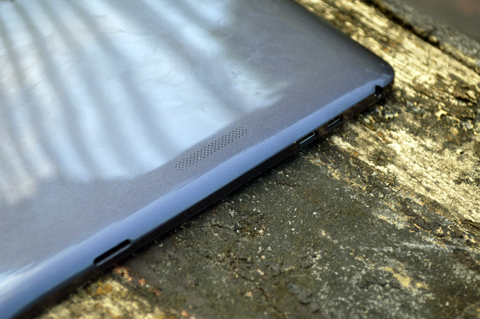 The T100 won’t back down from a multimedia showdown. There are two speakers found on both the left & the right sides of the tablet. It fires very loud audio and it doesn’t distort much even at the loudest volume. Paired with the vibrant colors & the wide viewing angles of the display, it can’t get much better than this for its price.

Powering the Asus Transformer Book T100 is a quad-core Intel Atom Z3740 CPU clocked at 1.3GHz. Some may regard that weak for a laptop, but we have to differ. Paired with 2GB RAM, this thing roars. 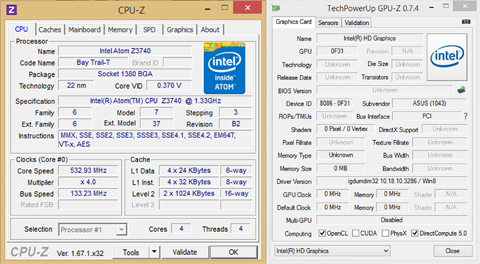 There weren’t much slowdowns even with multitasking and just like we’ve said in our first impressions, the T100 can handle games such as League of Legends, Heroes of Newearth & Company of Heroes. We’ve also mentioned in our first impressions that there were slowdowns in the Modern UI – well, not anymore as an update addressed the issue. In a nutshell, the T100 will surely get most tasks done be it work or entertainment. However, you can’t expect it to run Crysis. 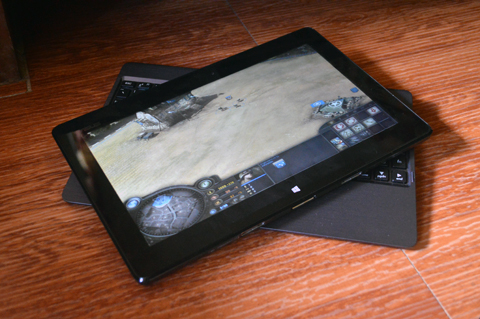 Asus claims the battery inside the T100 will last for 11 hours; that’s a huge expectation to live up to, and a lot of manufacturers end up making that a lie. We’ve been very impressed with the power management of Intel’s new chipsets and glad to say it still impressed us up to here – it’s just not what Asus claimed to be.

At 50% brightness and 100% audio volume, we continuously played movies while WiFi is on the background; Facebook messages and other notifications were constantly coming in & we even had huge downloads hiding in another window. From a full charge, the Asus Transformer Book T100 gave us a long & solid 9 hours of usage. While you’re truly going to have a hard time draining it, you’re going to have a hard time charging it as well, probably because of the micro USB port (no proprietary).

At the beginning of this review, I posed my scenario and the T100 confirmed my thoughts. This tablet is a gamechanger. At Php23,995, you get a beautiful balance of work & play, hardware & software. This isn’t meant to be the reinvention of the netbook or a reimagination of the tablet – it’s basically an evolution of both. I don’t want to see more tablets that can’t do much in this price range and I surely don’t want to see any more netbooks either. If you’re looking for a tablet because you want media consumption, you can get an iPad or an Android tablet; your choice. However, if you’re the one who’s considering getting a tablet because you need it to get work done, then get one with Windows 8.1, Microsoft Office, a set of powerful internals, great battery life & a seamless balance of everything else. For the price, the Asus Transformer Book T100 is one of the best buys out there right now.

The Asus Transformer Book T100 has been featured in our Christmas Gadget Guide to Tablets this 2013. You can check all our guides here.