The cheaper Transformer is here and we got a quick sneak peak of what it looks like this afternoon. Asus will make the official announcement on the 22nd but local reps allowed us to share with you some in-the-flesh photos of the Transformer Pad 300. At first glance, it would be hard to figure out if this is the Transformer Pad 300 or the original Transformer Prime. Asus made sure that they built the Pad 300 in the same solid build and elegant finish.

In some areas, the Pad 300 might look better than the more expensive, all-metal construction of the Prime. The lid cover has that concentric pattern etched to it like the one on the Zenbook. 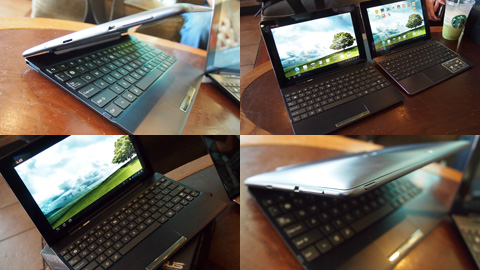 The lid cover is now made up of some polycarbonate material but still has that look and feel of aluminum. The replacement material also solves the WiFi and GPS problems that plagued the Transformer Prime. 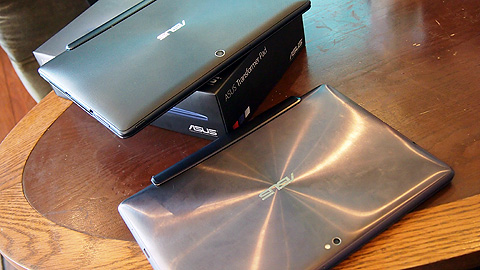 And of course, the specs…

Notice that the hardware configuration is almost the same as the Prime, spare for the display material used. So instead of the bright and vivid Super IPS+ display used in the Prime, Asus cut some corners and used a cheaper IPS LCD panel instead. Everything else looks the same on paper.

The keyboard and the trackpad was also changed and improved a bit. The area where the keyboard sits is deeper than the area in the palm rest giving each individual keys some more space and height.

The big question really is — how much cheaper is the Pad 300 compared to the Transformer Prime TF201? We have a figure but we just can’t share it with you yet. The only hint we can give you is that the whole tablet and dock will be priced really close with the SRP of the new iPad. Now that’s going to be an interesting comparison.