It hasn’t been a week since Apple announced the iPad Mini, but a Chinese manufacturer has already unveiled a clone called GooPad Mini and plans to sell it at more reasonable price as compared to the real thing. 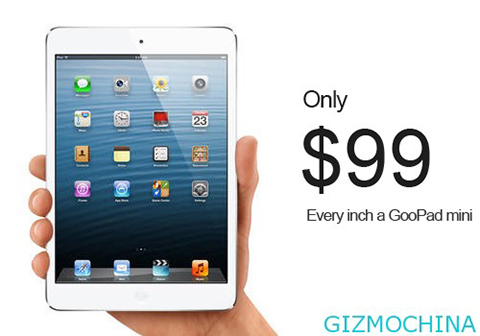 The first of its kind, the GooPad Mini is powered by a 1.4GHz dual-core processor backed by a gigabyte of RAM. On top of the 8GB internal storage, the 7.9-inch tablet also features a 2MP main camera couple with a VGA front-facing snapper.

Just to put icing on the fake cake, the company also outfitted the GooPad Mini with an iOS-like launcher. In reality though, the tablet runs on Android Jelly bean. Here’s a short promotional video courtesy of Gizmochina.com

GooPhone isn’t new to this “business”. In fact, they’re the same company that released GooPhone i5 which, according to them, where the iPhone 5’s design was derived from. They’re so proud with their “creation”, that they actually patented the design in their homeland and threaten to sue Apple if the company sells the 4-inch iPhone in China. That’s how good they are.

The GooPad Mini is set to hit the Chinese shelves starting next month with a USD99 price tag. Although we’re already expecting that a knockoff will surface at some point in time, we’re not expecting that it’ll be this quick. It only goes to show how good they’ve become when it comes to their “craft”.