Lenovo has officially brought its latest tablet offering to the Philippines, the Yoga Tab 11. Priced starting at PHP 20K, it sports an 11-inch IPS LCD, a MediaTek Helio G90T SoC, and a 7,700mAh battery. So how does it fare against the cheaper Xiaomi Pad 5, boasting the same 11-inch IPS LCD with a Qualcomm Snapdragon 860 SoC and a larger 8,720mAh battery? Let’s find out! 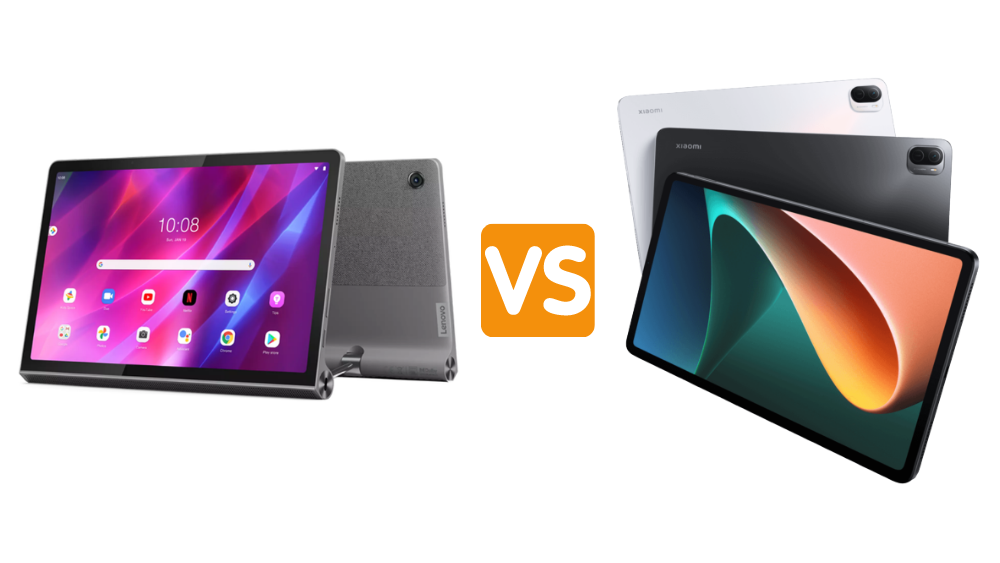 Both Lenovo Yoga Tab 11 and Xiaomi Pad 5 sport an 11-inch display. Both tablets are equipped with an IPS LCD panel, but the Xiaomi Pad 5 boasts a higher screen resolution of 2560 x 1600px. What’s more, it also has a 120Hz refresh rate and up to 240Hz touch sampling rate, enabling a smooth scribbling experience with the Xiaomi Smart Pen.

The Lenovo Yoga Tab 11 is powered by a MediaTek Helio G90T processor paired with ARM Mali-G76 GPU, while the Xiaomi Pad 5 is equipped with a Qualcomm Snapdragon 860 processor with Adreno 640 GPU.

Meanwhile, looking at the tablets’ Kimovil’s AnTuTu scores, the Xiaomi Pad 5 outperforms its opponent at 560,000, as the Lenovo Yoga Tab 11 scores only 290,000. However, keep in mind that we can only determine the extent of their performance and thermals once we have both units for review.

The Lenovo Yoga Tab 11 has two RAM options: 4GB and 8GB. However, the Xiaomi Pad 5 is only available in a single configuration: 6GB.

In terms of storage, both tablets come in 128GB and 256GB. Nonetheless, the Lenovo Yoga tablet can further expand its capacity up to 512GB via microSD. Unfortunately, there’s no microSD slot on the Xiaomi Pad 5.

For the rear camera, the Lenovo Yoga Tab 11 has 8MP, while the Xiaomi Pad 5 has a higher resolution of 13MP. Upfront, both tablets have an 8MP selfie camera.

Both tablets support the same connectivity features, including WiFi 5, Bluetooth 5.0, USB Type-C, and run on Android 11 under their custom skins. In addition, the Yoga Tab 11 comes with 4G LTE support (LTE model), while the Xiaomi Pad 5 is a WiFi-only tablet.

In addition, both tablets have stylus support. However, it’s an advantage for the Lenovo tablet that it already comes bundled with the Precision Pen 2.

For audio, the Lenovo Yoga tablet has JBL authorized four side stereo speakers, whereas the Xiaomi tablet has quad speakers with Hi-Res Audio and Dolby Atmos.

More so, for an added perk, the Yoga Tab 11 has a built-in stainless steel kickstand to allow it to stand, tilt, or even hang on the wall.

Although cheaper, the Xiaomi Pad 5 gives you more perks, such as a smoother 120Hz display, a better performance, a better rear camera, and a longer battery life.

However, if you need a tablet with a larger RAM, expandable storage, and LTE support (for the 4GB + 128GB), then you may opt for the Lenovo Yoga Tab 11 instead. Having a built-in kickstand and a bundled pen are its added perks too.

This is a mismatch. Xiaomi Pad 5 stomps.

Get the Lenovo Xiaoxin Pad (the china version of this) and let’s call it a fight. The china versions all have qualcomm snapdragon chipsets, way better than this global version with mediatek. Its cheaper too, as sellers from china on lazada and shopee also have complete accessories for it.