Microsoft has announced a new product and new member of the Surface family that features a 50.5-inch 4K+ multi-touch PixelSense Display, with built-inch cameras, speakers, and microphones – the Surface Hub 2. 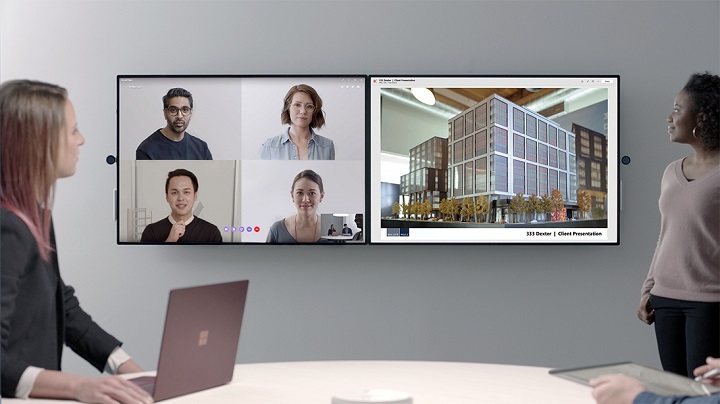 The Microsoft Surface Hub 2 is the follow up to the original Surface Hub which was released in 2015. It is designed for workspaces that need a large screen for collaboration. Microsoft has also teamed up with workplace experts Steelcase to give the Surface Hub 2 a system of rolling stands and easy-to-use mounts, making it easier to move the device around offices. As mentioned, it has a large 50.5-inch 4K+ multi-touch PixelSense Display that can be rotated 90-degrees for landscape or portrait mode. Since the cameras, speakers, and microphones are built into the device, they will pivot, too. Four Hubs can also be connected together in a move known as “Tiling”, creating one canvas for a PowerPoint presentation or video call, for example.

The Surface Hub 2 will be available to buy in 2019, with prices released at a later date.