As we inch closer to the launch of new processors/motherboards that support DDR4 RAMs, more and more companies are revealing what they in store for PC enthusiasts. One of them is G.Skill who just unveiled the Ripjaws 4 Series DDR4 memory modules that sport a revamped heat spreader and goes as high as 3200Mhz. 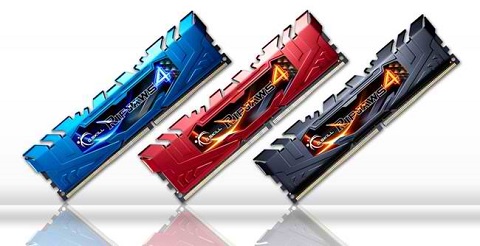 At the time of writing, the G.Skill Ripjaws 4 Series RAMs only comes in two sizes: 4GB and 8GB. However, these memory modules will be marketed in various kits which form bigger capacities, reaching up to 64GB (8GBx8).

Another thing to note here is the RAM’s speed. The lowest frequency available here is 2133MHz which uses the standard 1.2V. Meanwhile the top of the line Ripjaws 4 clocks in at 3200MHz and requires 1.35V to work.

As mentioned earlier, the G.Skill Ripjaws 4 will come with a new heat spreader which comes in Black, Blue and Red colors. The good news is that users will not have any problems with clearance on their CPU coolers since the Ripjaws 4 RAMs will still have the same height (40mm) as its predecessor.

Lastly, G.Skill was keen to note that the new RAM sticks are tested to work with upcoming X99 motherboards and as a bonus, 2400Mhz RAM kits and up will have support for XMP 2.0 profile for improved performance.

The new G.Skill Ripjaws Series 4 RAM sticks are not yet available in the market, but PC enthusiasts can already pre-order theirs through Newegg (see their listings here).