Sony has been very aggressive with it’s compact camera line ever since they released the very first RX100 a couple years back. Now on it’s 3rd iteration, the Sony Cybershot RX100 Mark 3 has become a close-to-perfect product after many years of refinement. Check out our full review of the RX100 Mark III below.

For all my product shots before December 2014, I was using a Nikon D3200, and while it’s decent at best, it was also bulky, lacking video auto-focus, and it needed some photo editing to get the best out of one shot. It was also our family’s camera, so I decided I needed my own — one that should be my all around pocketable camera, even for selfies and Instagram photos on the go. So last Christmas, I finally got the Sony RX100 M3. 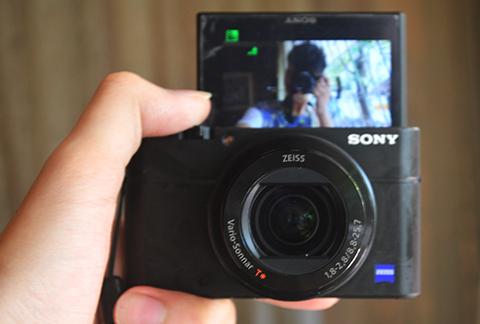 The Sony RX100 M3 is small and compact – and it’s one of the main reasons why I bought one. You can barely fit a DSLR inside a bag with your other things, and you can’t even fit the smallest of mirrorless systems into your pocket – but the RX100 M3 fits perfectly. It will bulge on tight jeans but it’s still pocketable, nonetheless. 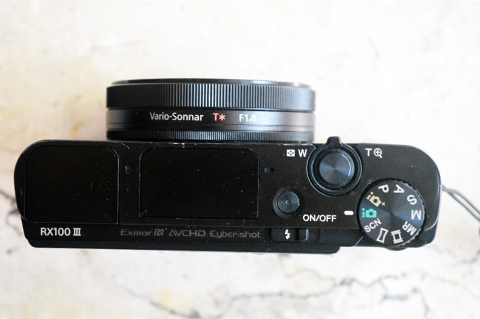 Sony’s RX100 design crawls all the way to the 3rd iteration, only bringing minor changes.

Metal and glass makes the most out of the construction of this camera, which makes it considerably heavy, even when compared to its predecessor, the RX100 M2. However, you can still operate it with one hand, something you can barely do with other bigger cameras. Be careful of dropping it or sliding it across sharp material though, as it is quite prone to scratches at some parts.

Also, aside from the metal bringing a premium feel, we think that the color black adds a lot more seriousness into the RX100 M3’s design. 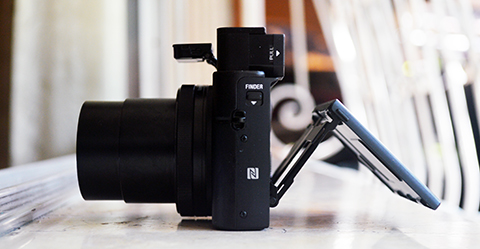 In terms of design & construction, the RX100 M3 brings a couple of changes compared to previous iterations: the LCD screen now goes all the way for selfies, there’s an EVF that can pop up on the top left side and the flash has moved to the center. The hotshoe from the RX100 M2 however, is no longer here. Since that’s gone and there is still no audio jack, say goodbye to microphone support.

The rest remains the same, from NFC & WiFi support, the modes, the zoom, the buttons on the back and the control ring around the new lens.

A lot of things about the RX100 M3 are easy to learn really, since the “C” button will explain anything you wish to know by a press when you’re going through menus or settings. It’ll take you 2-3 days to master the camera if you’re really into photography, and from there, you can configure the functions and settings of the modes you’re going to use eventually. There’s a control ring around the lens, and there’s another one on the back for scrolling, acting as arrow keys, and as another ring for control. By default in Manual mode, as you’d expect, they’re for aperture and shutter speed respectively. For other modes, you can change them according to your own preference. As for mine, I switch between exposure, zoom and focus from time to time.

The controls take some time getting used to, since the camera is really hard to handle because of its size (there’s no grip for the rest of your fingers, only your thumb). Because of how difficult it is to handle the RX100 M3, we think the added control ring and the other positionings of buttons do really well. 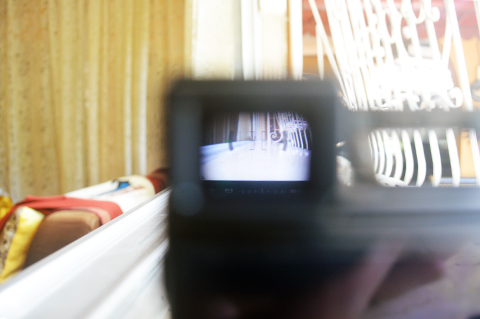 The EVF also works great if you need it. Pull down the button on the left side and the EVF pops out (powering on the camera if it’s off). You will have to pull it out after, and it’s astonishing in terms of quality. However, I don’t really use it that much since the LCD works well even in sunlight. Also, if you’ve read older reviews of the Sony RX100 M3, you may have also heard about the minor issue of some people including myself that the camera shuts down if you close the EVF. I wish Sony would solve this in a firmware update, or at least allow us to configure it – because as of today, there’s still no way around it.

Apart from the EVF, another thing that amazes people is that the Sony RX100 M3 supports WiFi & instant pairing through NFC. You will be able to send your photos immediately to your phone, or use your phone as a remote through the PlayMemories app. With this, a monopad and the tilting LCD, I already have the perfect selfie weapon.

I’m not so sure about everyone else, but people usually underestimate this camera the moment they see it – probably because point-and-shoot cameras aren’t a thing anymore compared to DSLRs and mirrorless systems.

The Sony RX100 M3 goes into DSLR territory in terms of photo quality with it’s 1-inch 20.1 Exmor R megapixel sensor, the new 24-70mm F1.8-2.8 Zeiss lens and its Bionz X processor. Check these out (details above the photo):

If you want more, check out some of my shots uploaded to my VSCO grid (the more recent ones). I also have some in my Instagram, but most of those are selfies.

As for video, I’ve used it more than enough to create the ones embedded down below. The Sony RX100 M3 is capable of recording in AVCHD and a higher bit-rate XAVC-S file format. However, the memory cards that I got weren’t able to keep up with the requirements for XAVC-S, so the ones below are just shot in AVCHD, 60FPS, but tuned down to 30FPS after editing and uploading.

You can pertain to the first one for daylight quality and the second one for low-light.

If you noticed, there was one part where the subject was out of focus, because the lighting was slightly off. The camera wasn’t able to autofocus given the time spent on that subject, so I think that’s a sad thing. However, for the most part, the RX100 M3 does a lot of things impressively well! There were a lot of noisy environments during our shoot, and we still got the most out of what we needed, but then again, if you need an external microphone, there’s no space for one.

As for low-light, you can see that the Sony RX100 M3 is a beast! The lights in the concert above were all over the place but exposure adjustments did really well. Despite being in a loud crowded room, again, the audio capture does well too.

The RX100 M3’s predecessors had better zooms than this one, but that doesn’t mean this camera does a lot worse. We were seated extremely far from the band in the video, but I’ve managed to capture almost exactly just what I needed.

The RX100 M3 powers up decently fast (slower when you haven’t used it for a day or two at first boot), and it also turns on if you press the playback button to see your photos and videos without extending and opening the lens / sensor.

My RX100 M3 has a slight problem though. Most of the time, the lens cover gets stuck halfway when powering up, leading me to uncover it manually with my hands, risking a smudge or scratch in the process. It’s really irritating, and I’ve found that this isn’t an isolated case; some brand new RX100 M3 owners are also complaining in forums. 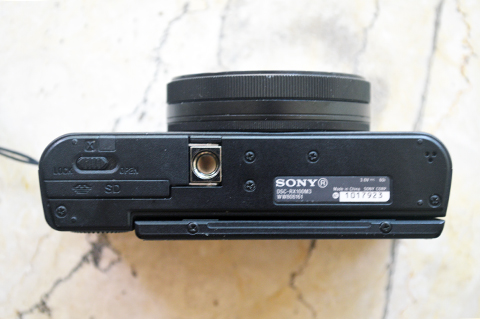 As for battery life, the packaged 1,240 mAh cell will get you through a full day of use (less if you capture lots of video). If you’re a heavy user, it might not just last one full day since you don’t really just measure camera battery life by “330 shots” – a lot of times I also leave the camera on standby, setting up for my selfies or sending them to my phone through WiFi. And so, because I can’t last a day of heavy use, I also have two more 1,400mAh batteries as extra, just in case.

Four months into 2015, I still wouldn’t give up this camera for any other in the market, because even for its price of Php44,990 (lower for cash purchases and in other retailers), there is just no camera that’s near as good as this one that can fit in your pocket. Heck, it’s even better than some similarly priced bigger cameras in some aspects. 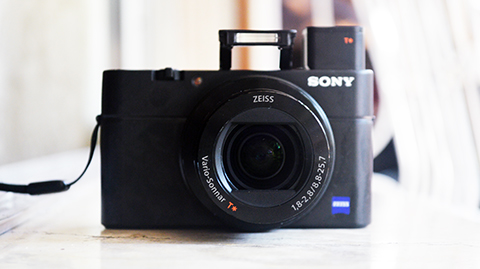 The things I didn’t like about this camera aren’t really dealbreakers for me: I can surely manage the weight and the handling as these are the costs that had to be made to be pocketable, and the microphone is good enough so I don’t really need an external one. As for the lens cover issue, it doesn’t occur all the time, and not all units are affected. However, I wish Sony would help out and improve on product quality in the future.

And the price? Well, it’s going to be worth it anyway, so start saving up now – if you want the best compact camera ever.