Galaxy S6 could have an iPhone-like fingerprint sensor

The next Galaxy flagship is already in the works with its fingerprint scanner being rumored to be redesigned. Users may soon say goodbye to Samsung’s cumbersome hardware implementation. 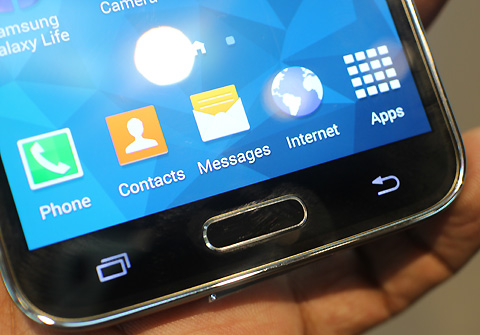 The swipe-based fingerprint scanner of the current Galaxy and Note devices, including the Galaxy S5, Galaxy S5 Mini, Galaxy Alpha, Galaxy Tab S, Galaxy Note 4, and Galaxy Note Edge, will be changed to a touch-based sensor. It will be similar to the ones found on iPhone 5s/6/6 Plus, iPad Air 2/Mini 3, and Huawei Ascend Mate 7.

With that, users will only need to touch and hold their registered finger for a second. Software-wise, the next generation scanner will still use Samsung’s great features like: device unlock, web sign-in, Samsung account verification, and Pay with PayPal.

The Samsung Galaxy S6 is rumored to feature a 5.5″ QHD display, 3GB of RAM, and 20MP camera. Of course, Android 5.0 Lollipop will be on-board the smartphone.