As we have promised, here’s our review of the Linaro-packing AniDroid rom for the Galaxy Note. It’s one of the most promising one we’ve seen and used on the Galaxy Note.

We’re not gonna dwell too much into details as you’re all probably familiar with the Galaxy Note by now so there’s no need to refresh you guys. Anyway, we’ve decided to try the AniDroid rom courtesy of Antony Novosyolov since we’ve gotten so intrigued with the performance improvements on the Android ICS thanks to Linaro Toolchain. 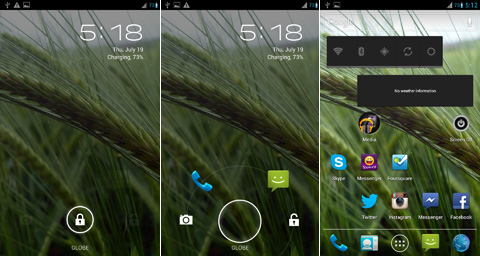 So after about two days of use, we’ve pretty much played with the blazing fast rom thoroughly enough so we’re confident that it’s the perfect time to finally write this article. The first thing we did notice upon bootup is the incredibly fast response and overall performance of the Galaxy Note, it was like owning a totally new smartphone! Applications start fast, replying to SMS while installing apps didn’t cause the keyboard to miss a tap and the UI was so smooth — we actually thought we were running a quad-core processor under the hood.

The AniDroid rom is essentially an upgraded CyanogenMod 9 RC1 ICS distro so it’s like using stock Android ICS — with an awful lotta’ kinks, here are just ‘some’ of the many problems we’ve encountered while using the rom as a daily driver:

â— The phone doesn’t always vibrate when in silent mode (even after setting it within the messaging app)
â— Sometimes tapping on a phonebook entry doesn’t register calls (even after numerous taps)
â— The MX player does not support hardware acceleration (probably an API compatibility problem, we don’t know but it is a ‘known issue’)
â— Automatic display brightness is very unreliable (sometimes it’d increase the brightness even if we were in a very dark room)
â— We could not install some apps, we often saw the “Couldn’t install on USB storage or SD card” error message which is a known issue as well
â— We couldn’t recover from our Titanium backup for some reason
â— Some applications would close on use without an error message, we’re often brought back to the homescreen as if nothing happened (we couldn’t see anything even when searching within the logcat)
â— USB data transfer speeds never exceed 1.9MB/s (God knows how impatient we’ve become after transferring a 2.3GB movie to the phone)

Far too many to mention here but the AniDroid isn’t all bad news, the performance improvements certainly outweigh the rom’s cons, well, for us at least. For example, the CPU governor (we used SmartAssV2) swiftly cranked up the processor when the need for speed comes and boy can you feel the 1.6GHz kicking in!

The Good (plus Benchmarks).

Well, like we’ve said, the AniDroid rom gave the Galaxy Note a new life. It’s one of the best custom roms out there to be quite honest, we’ve tried KingDroid, MidNote, etc… you name it, we probably have already flashed it. 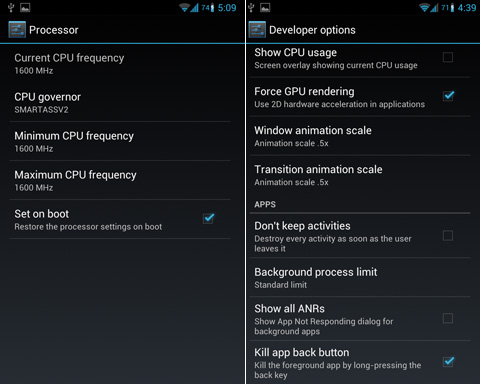 The general UI swiftness was noticeable, it was like using a brand new Galaxy Nexus out of the box if not better. Temple Run was incredibly smooth even while installing apps in the background and emails continuously flowing in, we’d love to find out how Shadow Gun fared with this rom but it gave the “Couldn’t install on USB storage or SD card” after downloading, same with Nenamark2, MotoGP, N.O.V.A. or just about any app that ‘we like’ or has a file size of over 80MB (we think) which is a bummer.

Call quality was great and noise-cancelling works according to the people we talked to on the other line, keyboard’s very responsive, camera is not as fast as the Galaxy Nexus’ though but everything else pretty much worked and HD video quality hasn’t changed at all. GPS locked pretty quickly too and WiFi/Bluetooth were both very stable. We couldn’t help but notice the stock Gmail app’s slouchiness when downloading emails though so that’s another kink.

Using Facebook and Instagram was a pretty choppy affair but Twitter was a dream to use, so was Foursquare and some other apps. Probably a GPU rendering issue since the choppiness occurred inconsistently and often disappeared after a while.

Benchmark scores on the other hand were pretty impressive (CPU clock locked at 1.6GHz), nothing record-breaking but thanks to the Linaro toolchain or whatever tweaks they’ve done to the rom, results turned out greater than we’ve expected. As you can see, the Note’s result is almost on-par with the HTC One X’s on the newer version of Quadrant which may seem a little impressive, but look closer: The score was largely attributed to the high I/O score not the CPU score, still impressive though.

The device was able to score around 5164 which is about the same as the HTC One S’s Snapdragon S4 chip can achieve. Linpack isn’t particularly a good benchmarlking tool due to its utter lack of accuracy but we still decided to give a shot. We were able to get higher scores of around 120MFLOPS at one time but we kept on tapping furiously so we weren’t able to take shot of it.

Battery life seemed a bit shorter than average, the phone often lasted only about 19 hours or less when using the SmartassV2 CPU governor profile. Using PegasusQ or conservative will probably stretch it by 30 to 50 percent.

Charging time on the other hand was strangely faster than usual. When we were using stock ICS it took about 3 to 4 hours to fully charge the phone from 15% but with this rom, topping up the completely empty 2,500mAh battery was done in under 3 hours. Our opinion on the battery life can seem a little biased largely due to the fact that we used to run the stock ICS on the Galaxy Note with Speedmod Kernel version K3-3 which is one of the best combinations we’ve ever tried. We suggest using the same on your Note.

The AniDroid V.04 rom is very promising and given that the rom is based on a pretty buggy CM9 release, it was bound to hold back more of the Linaro kernel’s potential. We can easily see this as a rom that can replace the stock ICS with TouchWiz for the Note, if it wasn’t for the telephony and SD error bug, we’d gladly stick with this one until a better version is released.

As enticing as it is, we suggest that you guys stay away from this rom for now and give it a little bit more time to mature. A little patience goes a long way after all.

Note: We’ll be posting another article for rooting and flashing roms so stay tuned.