Whether you’re just about to start your journey into the realm of content creation or a seasoned graphic designer or photographer, there’s one thing that is essential to your creative arsenal: photo editing software. And by far, Photoshop is the most popular one out there – and for an excellent reason. 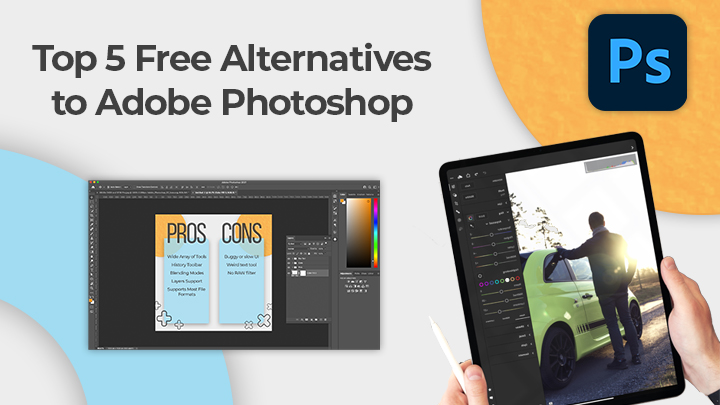 It offers a very extensive selection of photo editing tools and provides creatives with the option to explore its content library and even third-party plug-ins (for color palettes, actions, and other design elements).

However, as popular as Photoshop is…it doesn’t come cheap. You may have to subscribe to the whole Adobe Creative Cloud to maximize it to its true potential, setting you back roughly PHP 2,000 per month.

However, for those on a budget or within similar constraints, Adobe’s steep monthly fee may not be an accessible option. Luckily, some alternatives are almost up to par with Photoshop – if not equal. And the best part? These often come for free!

Follow our guide down below to see the Top 5 Free Alternatives to Photoshop. The GNU Image Manipulation Program or GIMP is a popular free and open-source alternative to Photoshop. It offers a wide array of tools and is compatible with Windows, Mac, and even Linux. Most photographers often rely on this software as it provides all the tools needed to fine-tune any photo – from color correction, cloning, selection, and enhancement.

It also has a dedicated team that regularly updates the software for optimal compatibility, ensuring consistent high-resolution output for the most popular file formats. And, if you’re weaning off Photoshop, GIMP even has a version that mimics the Adobe native software for easy migration as well as a built-in file manager that is akin to Adobe’s Bridge.

While GIMP can naturally do almost anything that Photoshop can, it does come with a few drawbacks. Some people might find the User Interface (UI) laggy or even hard to navigate – especially if you’re only starting. While illustrators, on the other hand, find the repetitive pre-set brush settings too monotone and the tools too lacking to properly sketch or paint with. When it comes to UI, ColorCinch is, by far, one of the best when it comes to Photoshop alternatives. It offers an extensive collection of presets, graphics, and even creative assets such as stock photos, vectors, and PNGs – something that you would usually have to pay an extra few bucks for with Adobe. And, to top it off, it requires very minimal processing power as it is completely web-based!

However, what ColorCinch is more commonly known for is its AI-backed specialty presets. Not only are they highly customizable, but are also stunningly refined and intuitive, to say the least. Let’s just say that it was formerly called Cartoonize for a very apt reason.

And for those that love to sketch, this photo editing software also provides a surprisingly large amount of brush presets, making free-hand sketching fun and unrestricted. In addition, it also supports resolutions of up to 300DPI and export to popular file formats such as PNG, JPG, and PDF.

Unfortunately, while its web-based platform makes it ideal for those with low-spec computers, it makes it difficult for those lacking a reliable internet connection. Let’s just say it’s not the best software to be used when you like to work in cafes or while traveling. 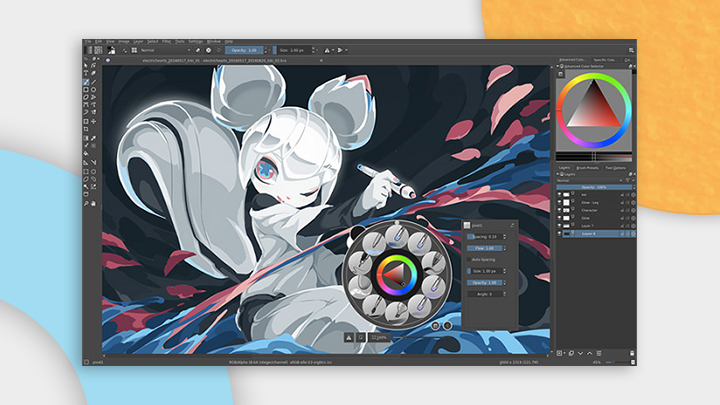 If you’re looking for the ultimate Photoshop Dupe, then look no further. Krita is likely the closest thing you’ll get while still retaining its sense of software identity. It comes complete with a pop-up brush and color palette, layer support, and diverse texture and brush packs usually made by Krita-users themselves.

One of the best things about Krita is the community it holds. You can often find artists sharing their works, tips and even offering free-to-use brush and texture packs in its forums. This sense of community coupled with a highly versatile and flexible interface makes it very popular among conceptual artists, painters, and even comic strip illustrators.

Furthermore, it also comes equipped with brush stabilizers, endless brush customizations and layer and blending support, and even assistant tools to help you create perfect shapes and paths. You’ll be hard-pressed to find a free-to-use photo editing software that has the same painting and illustrating flexibility as Krita.

However, while the potential of Krita is abundant, it does come with its fair share of drawbacks. Most noticeably, it lacks regular software updates, making its interface buggy and slow at times. It also doesn’t come with RAW filters and history toolbars – a major deal-breaker for most. 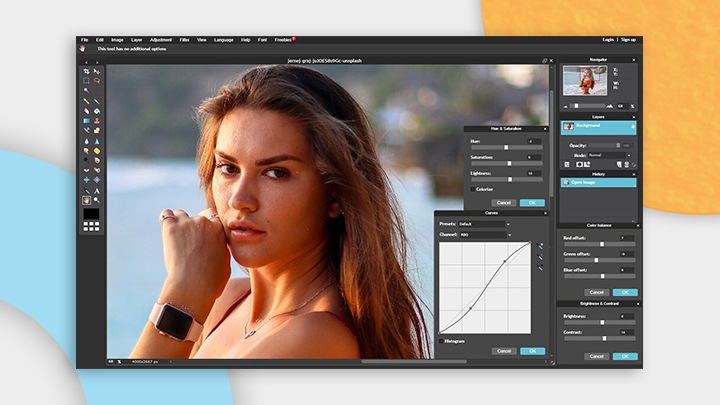 If you’re in the market for fuss-free photo editing software, then Pixlr X might just be your perfect match. Based on HTML 5, this web-based photo editor contains everything you need to color correct, color grade, and even enhance photos. And the best part? It works super well with any modern browsers, making it highly compatible with tablets and even smartphones.

It contains everything you need from orientation adjustment, curves, color correcting and enhancement sliders, and even extensive layer support with various blending modes. That’s why it’s not surprising that most photographers opt for Pixlr X rather than Photoshop or even Lightroom. You get the sliders and photo manipulation controls of both Adobe native software for free and accessible on the go.

However, as with most web-based software, it is limited by its reliance on internet connection. While it may be handy for those with access to mobile data, it may bring major drawbacks to those who have an unstable connection or lack bandwidth when traveling or outside their homes. 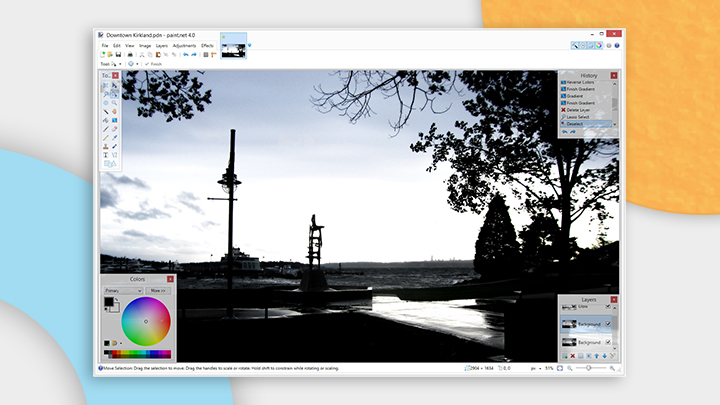 Initially a project to replace Microsoft Paint, Paint.NET quickly developed to its type of photo editing software. While its interface is reminiscent of the outdated Microsoft Paint, it bears only the simple tools that the former provides.

Simple yet powerful, Paint.NET comes complete with all the basic tools you need to photo edit and more. One such feature that makes it stand out from the rest is its use of a tabbed document interface, which means you can work with several documents within one single window. And, to make it even more beginner-friendly, its tabs come complete with a little thumbnail of your project, replacing the usual text description or file name.

Another upside to its simplicity is its interface speed. To keep it short, it’s super fast and is unlikely to take up too much of your CPU or RAM – even when left running in the background. Likewise, its developer team is also keen and quick to respond to improvements, bug fixes, and even releasing new features.

The only downside to this photo editor is probably that it is restricted by basic tools. However, that’s what it is designed for. Straightforward editing without the cluttered array of tools you’ll probably never use – unless, of course, you’re trying more advanced techniques.