In a rather unexpected Tweet yesterday, accompanied by a minimalist picture with the words “Here for Gear”, Nokia gave us hint that their popular navigation software (Nokia Here) will most likely be incorporated to Samsung Gear watches and Samsung Galaxy Smartphones. Today, all the speculations have been laid to rest as Nokia officially announced that they are bringing Here to Samsung Galaxy smartphones, as well as Samsung Gear smartwatches.

Here for Android comes with all the nifty features that made it one of the most revered navigation apps to date, including Offline Mode, vast collection of maps, half of which comes with turn-by-turn walk or drive guidance, and live traffic and real-time transit schedules.

In addition to Here (Beta) for Android, Nokia is also adding Glympse in to the mix which allows Samsung users to easily share their location to their loved ones in real time. 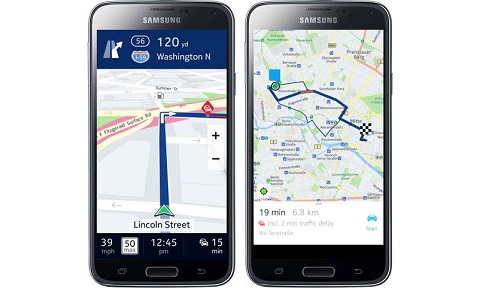 The first Samsung smartwatch that will come preintalled with Here (Beta) for Android is the recently launched Samsung Galaxy Gear S. Meanwhile, the Here for Samsung Galaxy Smartphone will be available for download once the Galaxy Gear S hits the stores.