Fresh of the heels of the release of two new Galaxy Notes, Samsung has released a firmware upgrade for the Galaxy Note 5.3″ (German variant). Although it’s not the Jelly bean weâ€™ve all been waiting for, it does brings a handful of improvements.

This OS upgrade, which is dated August 28, was made available to German users via an OTA update or Kies since last week. However, it’s not yet available locally so youâ€™d have to apply the update manually using Odin. Here are the list of things that’s new with the upgraded OS. 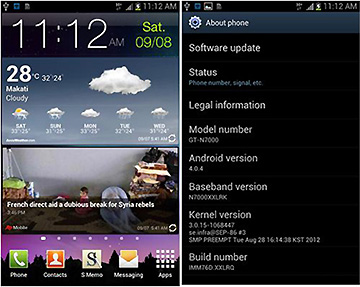 Here’s a short video demo of the OS installed on our SGN:

Should you wish to apply this update manually, we did a tutorial on how to flash a ROM via ODIN when we posted an article on how to SIM unlock your SGN.

Still haven’t got this update on both Kies and OTA… Ang tagal naman.

I hope the updated launcher is as smooth as the one in S3. Touchwiz in the Note has noticeable lags.

argghhh!! the title got me excited thinking it was jelly bean!

Just want to inquire if there would be any ics/jelly bean updates for the the yp-g70?
Thank you.