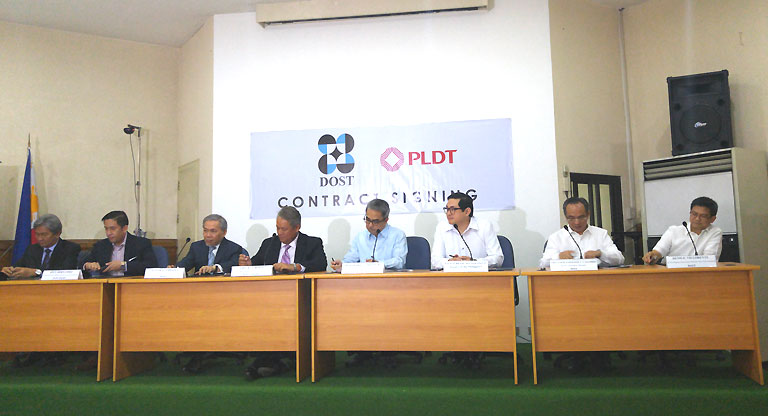 Earlier today, we witnessed the MOA signing between PLDT and DOST-ASTI that details the local IP Peering of PLDT with PHOpenIX. The same event also officially designated the PHOpenIX as the government’s official IP exchange (G/IPX).

Top brass of PLDT were there to sign along with DOST Sec. Montejo and Sen. Bam Aquino. It is worth to note that it was Sen. Aquino who’s been instrumental in getting both parties together and encouraging PLDT to join PHOpenIX.

We asked some specific questions about this agreement and here are the responses we got from both parties:

The underlying policy for this development is AO39 (Administrative Order No. 39) signed in June 12, 2013. AO39 mandates all government agencies to migrate to the Government Web Hosting Service (GWHS) of the DOST-ICTO. DOST has currently migrated around 80% of all government websites to the GWHS.

This provision requires that any gov’t agency that wants to access or connect to other government websites and e-services must be able to access them thru the G/IPX facility. If an ISP or internet provider is not part of the G/IPX, then that agency will need to subscribe to another ISP that is part of the local IP peering to comply with Section 5. This means PLDT will need to be part of that local IP peering in order to retain their various government contracts.

Likewise, the recent DOST-ICT Project on Free WiFi in Public Places also includes a requirement that bidders are only qualified if they are part of the G/IPX. The Commision on Audit (COA) is tasked to monitor and enforce Section 5 and will disallow budgets for contractors and suppliers if they are not part of G/IPX.

In a way, this is one of the many motivations why PLDT has finally decided to join the group.

Bam on the MOA Signing between PLDT & ASTI as Operator of the PHOpenIX
7 September 2015, Department of Science and Technology, Quezon City

Speech during the MOA Signing
“Magandang umaga po sa ating lahat. Definitely, today is a big step towards achieving our goals of having improved Internet services in the Philippines.

This means, now that PLDT is connected to the PHOpenIX, our government data, any g to g data doesn’t have to leave the Philippines and can actually just travel locally among our shores.

Can you imagine the issues on national security previous to this day and this partnership? Before, government data had to travel outside of the country and come back to our shores to be able to get back to other government websites.

Today definitely is a huge day and we would like to thank PLDT and DOST for finally working out this partnership. Definitely, we can all sleep more soundly tonight now that this partnership is done.

Malaking bagay po na ang huge player like PLDT is now connected to the PHOpenIX. It does open a lot of opportunities in the future. At the minimum, our government sites are safer and of course would be more efficient Of course, this partnership does open the doors for other partnerships down the line.

What I’ve been harping about IP peering in the Senate hearings regarding IP peering, I think, we’re one step closer to that with this MOA signing.

Hopefully there will be another great announcement before the end of the year when it comes to full IP peering in the Philippines.

Today is definitely a good step, a big step and along the way of trying to improve Internet services in the Philippines, this is one of those days that we will remember as a banner day to be able to get to the goals that we want for our country.

More and more, lumalabas talaga na ang competitiveness of our country, a large part of it, in the next five to 10 years, if not the next two to three years, will be dependent on how good our Internet infrastructure is.

We’re hoping that together, we can really build a much improved Internet infrastructure in the Philippines.

We have a long way to go definitely, but sabi nga nila, each journey begins with one step and this is definitely a good step in the right direction.”

Transcript of Interview after MOA signing

Q: How this agreement will benefit the public?

This will help in terms of security, and should help in terms of quality of the service. We’re hoping this can be a good first step, simulan natin sa government websites but the goal really is lahat ng mga websites sa Pilipinas, nag-uusap-usap, nagkakaroon ng interconnectivity.

Q: Can you elaborate on security, di ba may mga incident ng hacking sa website? How would this prevent ang mga ganoong occurrence?

Sen. Bam: I think the first step is have the government websites host it sa PHopenIX kasi I think previous to a few years ago, kanya-kanyahan iyang web hosting.

So it’s important to have it web hosted by DOST and at the same time, iyong security measures nila, maaaring magamit ng government agencies na iyon.

Having that backbone and that infrastructure is important to our competitiveness kaya panahon nang may sariling ahensiya na nakatutok dito.

Photo Caption
Sen. Bam Aquino (third from left) joins Department of Science and Technology (DOST) and Philippine Long Distance Telephone (PLDT) company officials as they sign a memorandum of agreement (MOA) for the IP peering that will provide faster access to government websites.

Under the MOA, the PLDT will provide the DOST, through the Advance Science and Technology Institute (ASTI), fiber optic connectivity to ASTI, becoming PHOpenIX’s third physical connection point.

Sen. Bam called the agreement as “a big step towards achieving our goals of having improved Internet services in the Philippines.” At the minimum, Sen. Bam said government sites are safer and would be more efficient.

PHOpenIX obligating PLDT to peer is a good idea though not totally (looking in different perspective). These peering agreement apply to deliver content with lower latency only to those contents/website that is hosted by a local ISP or to one of the members of PHOpenIX such as Akamai.

We do not expect much that most websites that we are visiting are hosted or accelerated by Akamai’s customers are mostly enterprise.

There are only few websites or contents that has IP Addr’s of local ISP’s, to name a few, www.bir.gov.ph(Converge ICT and Globe Telecom)/www.sss.gov.ph(Their own ASN connected to local ISP’s) and website of those local ISP. And do note that even Globe Telecom’s website is accelerated by Cloudflare.

Ang masasabi ko lang hindi talaga guaranteed ang efficiency nito since most of the contents are hosted from outside the Philippines, ang iba panga napakalayo sa ating region/continent. Màs maganda kung they will increase connectivity to other continents or upgrade their international link capacity.

I have read somewhere that PLDT have more or less 1.7Tbps (dunno if it was true nor updated) of international capacity and to think na kung sabay-sabay gumagamit ang mga subscribers ng PLDT, ipagpalagay nalang natin na kahit 2-4Tbps pa and 5M (worst case scenario) that only leaves an allotment of 0.6Kbps of international bandwidth to subscribers (computation 3Tb/s divide 5 million subscribers).

P.S. The client number is not factual, I just set it as a maximum amount since it’s impossible and idiotic to put simultaneous 70 million subscribers and do note that 1.7Tb/s isn’t accurate so I made a possible yet not very far adjustments. But if that is true ewan ko lang kung ano mapapala o makukuha na serbisyo ng mga user.

Hi Author, I hope next time you can proof read the article first before posting. DOST’s Secretary is Mr. MONTEJO not MONJE. Thank you

nothing says about local peering of data telecoms… the peering is only between government host and pldt, since PLDT are the only ISP left that doesn’t peer locally with government sites..

the local peering will only be successful if PLDT will benefit from it.. but from this point on there is nothing beneficial for them to do this as is they want to become the gateway ISP in the Philippines, and this is certainly will cut their dreams away..

Sana po you can sit down with PhOpenIX team and squeeze some more info for us. Im very interested to learn what exact hardware they are using. How resilient are the infra in placed? And how the four sites (soon) are interconnected? Like how much uplink is available in between them and if they are in a mesh config as well as who provided the links most especially for the Cebu site? Nonetheless, the recebt news is a welcome development for our thriving internetz. Thank you

While the arrangement does not require PLDT to exchange traffic with other ISPs via the local Internet exchange, it will allow PLDT clients to peer directly with government websites through the PHOpenIX.

At the same time, the deal enables the telco titan to become compliant to Administrative Order No. 39, which mandates all local service providers to connect to the government-run PHOpenIX.

At the event, Espinosa broached the possibility that PLDT may soon join the local Internet exchange — a marked departure from the company’s hardline stance in the past of not connecting to the PHOpenIX.

i hope next time is to lower the price of DSL or make it faster at the current price level.

In layman’s term, what does it mean for the parties involved, to the end-user? Somebody please write something sensible about the agreement and not just copy-paste stuff.

We already wrote about the benefits in a previous article, but let me copy-and-paste our previous story here:

One of the biggest benefit when local ISPs are interconnected via the PHOpenIX is shorter transit time between a subscriber of one ISP to another subscriber of a competing provider. This is true with services and content that is hosted by one ISP that is accessed by a subscriber of a competing provider will also be faster as the IP connection no longer goes out of the country and back. Gamers will also experience lower latency time when accessing game servers of members of the PHOpenIX.

Will this really benefit the end users that much? The last bullet point

“The local peering is currently limited to websites and online services of government agencies. This means consumers’ access to sites like SSS online, BIR eFPS, and related agency sites will pass thru the exchange.”

Sounds like enduser peer-peer traffic will not be involved?