Use GCash to buy Prepaid Load for Smart and Sun

During our trip to Berlin, Germany last week for IFA, I accidentally discovered that my GCash account had an option to buy load for other networks such as Sun or Smart. I totally forgot about it until today when I had to quickly reload my other Smart prepaid number.

So I fired up the GCash app on my HTC One and could not find the feature. When I tried it on *143# and chose GCash, the option re-appeared. It was buried deep into the options under GCash but you definitely notice it included Smart and Sun.

Here’s how it looks like when you go thru the settings via *143#: 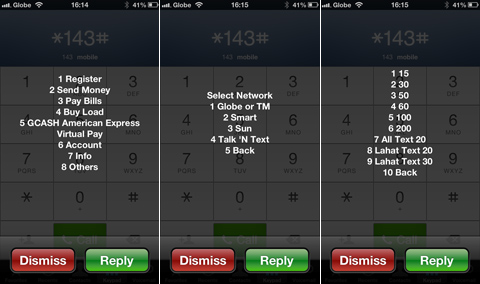 Not really sure if it was there from the start or has only been added recently. Been asking around some people who frequently use GCash i they’ve seen it and no one has ever spotted it.

Load denominations starts at Php15 and goes up to Php200. You can also subscribe to All Text 20, Lahat Text 20 and Lahat Text 30.

I’ve tried it several times on my prepaid phone and even on the Smart LTE I use to test once in a while and it worked just fine. There’s no additional transaction cost on the part of GCash so this is almost the same as if you reloaded in any of the retail stores.

This is a bit of a surprise to see Globe enabling GCash reloading of prepaid credits to Smart and Sun, and very convenient if I might add. Now we’re checking if we can do the same with Smart Money.