Public safety is the pinnacle of any government. Put quite simply, if a government is not doing its best to protect its people from countless disastrous factors (yes, that includes recessions, wars and natural disasters) then that can only mean one thing: It’s not doing its job right.

Well, to be honest, saving millions of people from a flood or earthquake isn’t exactly a simple task. We — the citizens, also have to do our part. That’s why our current President Noynoy Aquino and the Department of Science and Technology or DOST (along with 21 other participating agencies and organizations) has come up with Project NOAH (Nationwide Operational Assessment of Hazards). NOAH aims to serve as a unified monitoring and early warning system for catastrophic weather, earthquakes and other natural calamities that we can access from home, so we can take appropriate actions before these natural turmoils come to us. 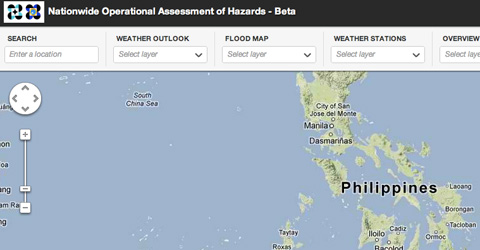 With Project NOAH, the public can now take advantage of up-to-date local weather forecasts on a user-friendly web interface that features a detailed mapping service provided by Google and many others. Taking advantage of Google Maps isn’t particularly exciting, but for something that’s done by our government, it is worth mentioning. That means they’re actually paying a lot of attention to details to improve the user experience, there’s nothing wrong with PAG-ASA’s public weather forecast, it just looks a little too outdated in my honest opinion.

Apart from local weather outlooks, users can also monitor the following on the Project NOAH in just a few clicks:

– Search for specific addresses that can be submerged in floodwater.
– Floodmaps of Marikina, Cagayan De Oro, Iligan, Infanta and Lucena with corresponding water level elevation predictions from 5 to 100 year increments (including Ondoy).
– Location of weather stations throughout the country.
– Location of stream and rain gauges.
– Raw and processed imagery taken from MTSAT-1 (Multi-Functional Transport Satellite) for typhoon and rainfall monitoring.
– Detailed view of local rainfall, temperature and pressure contours/scales.
– Live doppler radar input from Baguio, Subic, Tagaytay, Cebu and Hinatuan.

The collaboration between numerous agencies behind the Project NOAH is really impressive, intertwining those massive weather inputs from hundreds of locations into a unified system must be one hell of a feat.

The government is obviously determined to get this thing up and running since they’ve purchased over 100 new weather gauges as well as 4 new Doppler radars for it (thanks to the funding provided by World Bank), NOAH is still undergoing continuous development, the system will also soon provide high-resolution flood hazard maps from 600 automated rain gauges and 400 water level measuring stations for 18 major river basins within our country.

DOST and PHIVOLCS are working hard to get seismic inputs integrated into the system so stay tuned. NOAH is set include landslide locations, seismic activities and many more in hopes of promoting better community preparedness and to prevent sequels to the numerous tragedies involving typhoons Sendong, Ondoy, Quiel and many others.

There’s actually another system very similar to NOAH that’s currently existing in Japan. While NOAH is focused mostly on weather, its Japanese counterpart is more aimed towards providing early warnings about earthquakes and tsunamis.

Editor’s Note: Just had a taped interview with Apples Jalandoni of Bandila (ABS-CBN) a couple of days ago regarding local apps for flood warning and monitoring. We looked into the iTunes App store and Google Play Store and found none for the Philippines. Yet, there are tons of similar apps out there for other countries/regions/cities.

It would be nice if we had something like the Project NOAH, MMDA app and then the Traffic Dito app to incorporate both official reports and user-generated reports. Something like a BahaDito app. Any takers? – Yuga