According to Kaspersky Labs’ Cyberthreat Real-Time Map, the Philippines is among the top 20 most malware-infected countries around the world.

Kaspersky’s Cyberthreat Real-time Map is an online tool that gives you a visual representation of online malware activity being detected by Kaspersky Antivirus and Internet Security Multi Device software around the world. 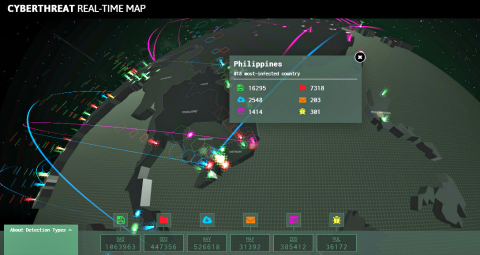 Whenever Kaspersky’s sub-system is triggered, it will show up in the map as a beam of light, represented by different colors depending on what kind of malware is detected (infected flash drives, email, malicious websites, online intrusion, etc.)

From 00:42 – 00:50 of the video you can see an oddly-shaped Philippines with mostly green and blue light beams.

At the time of writing, the Philippines was ranked at number 18. Russia takes the top spot as the most infected, followed by Vietnam, the United States, India, and Indonesia.