Having slow internet lately? Bad news of the day: Internet speeds all across Southeast Asia have been significantly reduced due to a broken undersea cable in Vietnam. 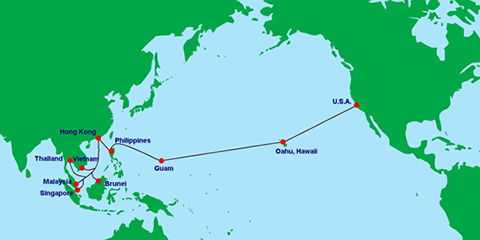 One major underwater cable, the AAG or Asia-America Gateway, that connects Southern Vietnam to Hong Kong was cut on September 15. AAG is a 20,000-kilometer communications cable connecting Southeast Asia to the United States via Guam and Hawaii. It is also the primary source of connection for most of Vietnam’s telecommunication systems, as AAG is carrying most of the capacity and Vietnam only has four submarine internet cables to boot.

Telecom authorities say that it’s likely caused by anchors of local ships who pass through the maritime area which also happens to be the area where the cables are laid. Blames were also pointed at the system’s poor technical design. “I must say that the AAG cable system was built to a below-standard technical design, which is the major reason behind its frequent fractures,” said Nguyen Van Khoa, General Director for FPT Telecom in Vietnam.

Repairs for the broken cable will start on September 29, and may take 20 days or more to finish depending on the weather.