Jason Scott, along with his buddies at Internet Archive (not to mention a legion of over 5 million passionate supporters) have been hard at work since 2013 to curate classic MS-DOS games and make a platform that will be used to play those game on a web browser. Their labor has finally come in to fruition as they announce that more than 2000 old-school titles are now available for everyone to enjoy.

Along with the release of its expansive library of MS-DOS games, Jason and his team also unveiled latest version of the Internet Archive’s main page. In a short blog post, Jason explained some of the improvements that he and his team have done to make the interface “faster, slimmer, has added a bunch of features, and continues to become better to use”. 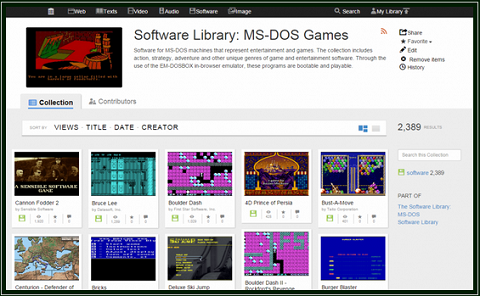 He, however, admits that there is still work to be done, which is why he’s reaching out to all the users to keep reporting bugs or any issues that may hinder the site from providing seamless experience.

If you’re in for some MS-DOS fun head over to the source link below and marvel at the vast collection of popular and rare titles that you thought you’ll never have the chance to play again.