Bose already has lots of different speaker models for varying usage but the SoundTouch series is something new for the company. This lineup specializes in multi-room setup that all connects using Wi-Fi. What we have is the SoundTouch 20 which sits in the middle of SoundTouch Portable and SoundTouch 30. See what sets it apart from other speakers in our review. 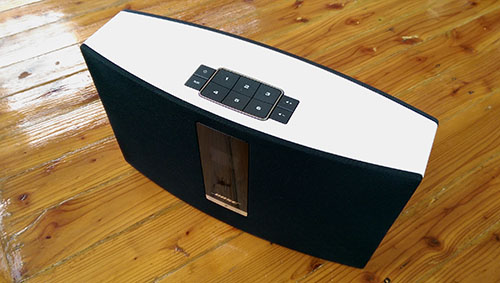 The SoundTouch 20 has a basic-looking design in terms of form factor and button placement. It has a body that curves outward and a flat surface where the minimalist-themed buttons are placed. The speaker’s body has a white strip running in the middle pressed together by black panels that make its overall appearance easily blend in wherever you place it.

The buttons look very simple, yet serve a vital purpose in the SoundTouch 20’s functionality. With the numbers 1-6, you can program almost anything for easy bookmarking just by long-pressing a number. For example, if you want to easily access a specific radio station, just go to it and press and hold a number to assign a shortcut. If you want a specific playlist to play, just do the same thing and you’re good to go. 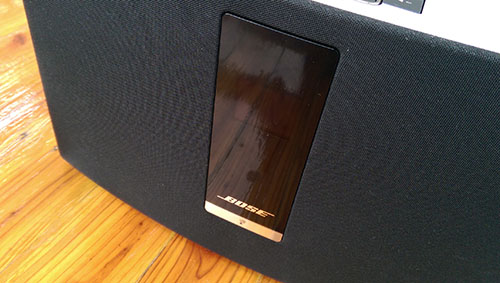 All the media info, status of speaker, and connectivity functions appear on its built-in OLED display. The rest of the area is where the grille of the speaker drivers are, covered in soft fabric. 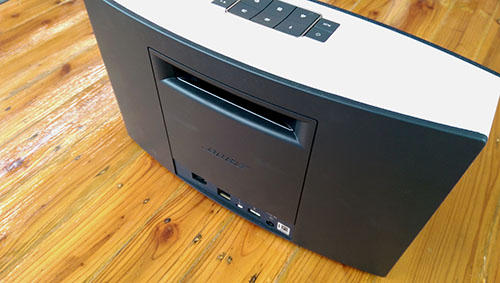 At the back, we have a plastic panel protecting the innards with a hole that acts as a bass out and doubles as a carrying grip. Further down are all the ports for connectivity including Ethernet, mini USB & USB ports, and AUX in. 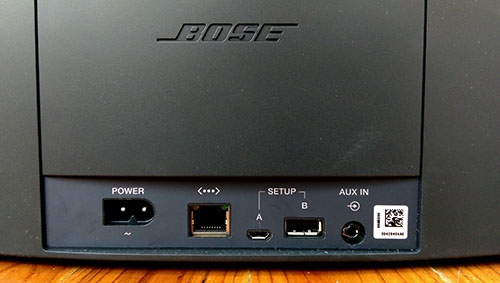 During setup, we initially downloaded the SoundTouch software into our computer as you can’t connect the speaker to the Internet without it. We were then asked  for the computer to be connected to the SoundTouch 20 via USB. From there, the software guided us throughout the setup and in less than 5 minutes, the speaker was ready. 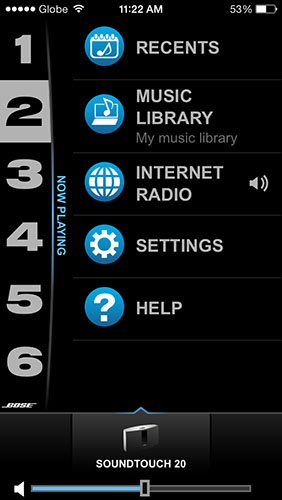 We also downloaded the SoundTouch app for iPhone so we could use it to play music. The interface is straightforward and very easy to navigate. Arranged vertically on the left side are the preset numbers so you could go straight to your favorited tunes and playlists once you open the app. Swipe it from the right and you can start looking for new music either through Internet radio or from your music library. 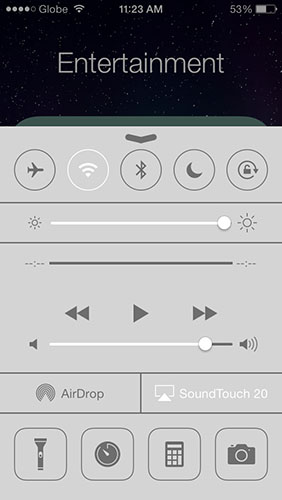 For iOS users, SoundTouch 20 also supports Airplay in which you can use the speaker for audio out when you play games or watch videos on your iOS device.

After letting its speaker drivers stretch by playing continuous music for more than 24 hours, we were ready to listen to it. For a stationary speaker this small, we were impressed at how loud it could go. At 50% of volume it filled a medium-sized bedroom and at 100%, we’re confident it could handle a spacious living room. Notably, we were waiting for sound clippings or distortions while at its maximum volume but we failed. Even at its loudest the sound still proved whole and the bass solid. 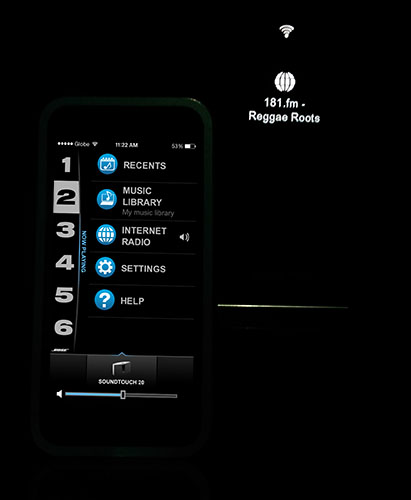 One thing we noticed, though, was that the highs tend to be too bright for our liking. Voice reproduction, on the other hand, were delivered with the right power. Both the mids and lows kept their balance despite varying volume levels. Being a sucker for well-balanced sound, we’d say the SoundTouch 20 didn’t deliver too well for a speaker carrying such a brand.

Keeping in mind that the Bose SoundTouch 20 works with other models in the same lineup and strictly requires Internet connection, we don’t think it’s a practical speaker for a country like the Philippines.

One reason is that the SoundTouch 20 and SoundTouch Portable comes at Php29,500 per piece while the higher-end SoundTouch 30 is at Php49,500. Collecting the lineup will already set you back more than Php100K just so you could setup three speakers in three different rooms. Yes, you could play songs from one source to three different speakers and you’ll even have individual control over each of them, but according to what we’ve noticed that’s not what people here are exactly looking for.

Another thing is its dependence on Internet connection. Whether you play music from your phone, computer, or tablet, or whether you stream radio you need to have a reliable Internet connection to get uninterrupted listening time. In a country where connection speeds are greatly an issue we don’t think everyone could take advantage of all its capabilities.

Overall, the SoundTouch 20 itself is one fine-looking speaker. It’s got powerful mids and uncompromised lows, but lacks solidity on its highs.

What we didn’t like:
*Overly-bright highs
*Pricey
*Relies heavily on Internet connection

You can still get an excellent meal at a restaurant that doesn’t participate
directly in the program, because the restaurants often have gluten-free pasta stashed away for their regular clients,
and they’re already well familiar with celiac disease and gluten-free food.
Power outlets make sure that you are getting problem free
experience even with your old laptops because they may turn dark without power outlets.

The author of this GFP article loves fruit and realises that this
affair was fostered in childhood where his father grew many varieties of fruit trees in his home yard.

Very rapidly this site will be famous amid all blogging users,
due to it’s pleasant articles or reviews

anyone heard of the

It’s an remarkable piece of writing in support of all
the internet users; they will obtain advantage from it I am sure.

anyone heard of the

My spouse and I absolutely love your blog and find most of your
post’s to be what precisely I’m looking for. Does one offer guest writers to write content to
suit your needs? I wouldn’t mind composing a post or elaborating
on many of the subjects you write about here.
Again, awesome blog!

He now stalks the slums of Noxus, drawn to the plague-ridden and diseased.
It is actually really effortless, you basically need to do
two things. You acquire everything that impacts the sport employing
affect points (IP) which you make even though actively
playing.

I’m not sure why but this website is loading incredibly
slow for me. Is anyone else having this problem or is it a issue on my end?
I’ll check back later and see if the problem still
exists.

Hello to all, thhe contents existing at this website are genuinepy awesome for
people knowledge, well, keep up the nice work fellows.

looked over the information on this site quite a bit, hoping to take the leap soon enough
and get a steam shower cabin, possibly just after the holidays