Cherry Mobile has their own VR headset w/ remote

Cherry Mobile has their own VR headset w/ remote

Cherry Mobile’s line of products has been pretty diverse now, and in response to the current trend of virtual reality, they have released their very own VR headset complete with wireless remote. 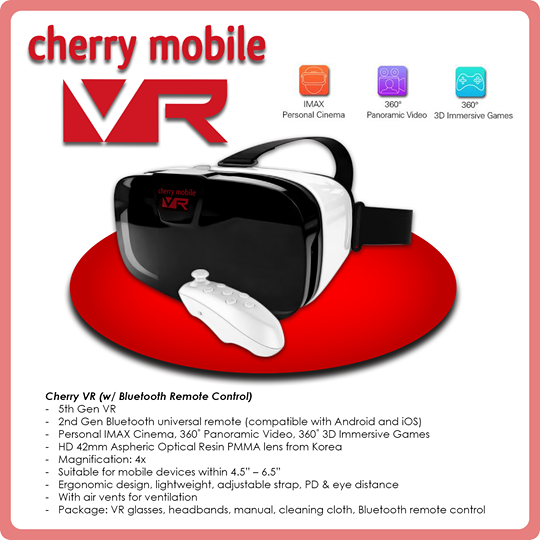 This is not your yet-another Google Cardboard ripoff, in fact, it’s more a copy of the Samsung Gear VR based on the image above paired with a Nintendo Wii joystick. Labeled as the Cherry VR, this VR bundle comes really cheap.

Specs-wise, the VR headset supports 360-degree panoramic video, images, and games. It’s equipped with a 42mm aspheric optical resins lens that can magnify the phone’s display up to 4 times. It’s suitable for 4.5″ to 6.5″ mobile devices with resolutions of HD up to 2K. Every purchase includes headbands, cleaning cloth, and the Bluetooth remote control that’s compatible with Android and iOS.

There’s no direct announcement from Cherry Mobile itself but the headset is listed for sale through their official accessory store on Facebook for just Php 1,250. Check out the listing here.

Thanks, Kevin Handog Tresuelo for the tip!