Last time we gave you guys a quick tour of the Parrot Zik and some of its nice set of features that made it a standout among the other premium headphones in the market. Now, we’re here to see (or hear) if these pricey cans have a decent sound quality to go along with its looks.

Just a refresher, the Zik is a geeked-out wireless headset designed by world-renowned industrial engineer Philippe Starck and manufactured by Parrot. It’s considered by many as the most technologically-advanced headphones because of the extra features (NFC, Touch-sensitive controls, Jawbone and Vibration-tracking sensors) added to its arsenal. 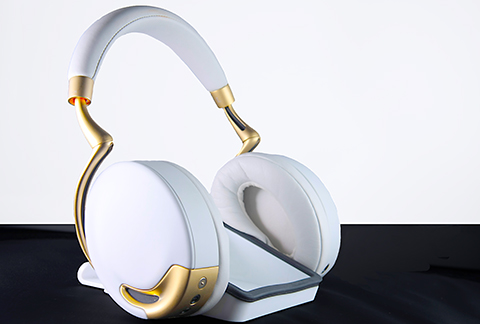 The Parrot Zik can be used wired (through audio jack) or wirelessly (via Bluetooth). Wireless connection can established manually or by pairing it to the audio source using NFC. Furthermore, the Zik is imbued with touch controls on the right ear cup which allows users to increase/decrease the volume, change tracks and Play/Pause the music, as well as Vibration-tracking sensor which automatically pauses the music when it detects that it’s removed from the listener’s ears.

No shortage of microphones

In addition to fancy controls, the Parrot Zik also has a set of microphones, a total of five to be exact, scattered around its body. Of these five mics, only one can pick up the user’s voice, while the other four is assigned to pick up external noises which allow the Zik’s built-in noise cancellation mechanism to emit the same sound waves to suppress unwanted noise.

As if that wasn’t enough, Parrot also threw a Jawbone sensor in the mix which allows the designated microphone to zero in on a user’s voice when the Zik is used as a communication device. The result, as you’d expect, is nothing short of outstanding. We were clearly understood by the people we’ve talked to on the phone even when we were in a crowded place and during public commute. The additional two microphones (most headphones with ANC only have two mics) seem to really do the trick and perform quite well in almost all situations.

We were initially planning to do a separate test on the Parrot Zik’s sound performance to show the difference between the outputs when the headset is directly hooked up to the sound source and when it’s wirelessly connected.

However, after playing around with the Zik for a number of days, we can’t really distinguish the difference in sound which is rather surprising since most headphones like this usually performs better when plugged in to a device.

(24 hours of burn-in was done prior to the actual test)
Device: iPhone 5
Volume: 80%
Equalizer: Off
File format: Combination of .mp3 and ALAC (.m4a)
Track bitrate: 256Kbps and above

The Parrot Zik offers a well-balanced sound output with no particular attention to a single portion of the sound spectrum. It delivers deep and rumbling bass, but doesn’t come at the expense of drowning the mids and the highs.

Although the vocals were a bit attenuated for our liking, it’s not something we’d consider as a red flag for this headphone. The cymbals and other similar instruments sounded very natural and has a nice sparkle to it. This Bluetooth headset also did pretty well in picking up small sound detail in the songs that you wouldn’t normally hear on run of the mill headphones.

Unlike other wireless headsets, the Parrot Zik can still be used even without a battery (or it ran out of juice) by plugging it directly to the audio source. However, in doing so, you’ll lose all of the fancy features we’ve mentioned earlier, as well as its noise cancelling properties. Not only that, we also noticed a significant difference in the sound quality when the Zik is running on empty. This is because the headphone needs power in order to make use of its built-in DSP (Digital Signal Processing) to produce sounds that are more pleasing to the ear.

Bottom line, despite of the fact that the Zik can still be used even without battery, you’re better off using it with its battery charged, or else you’re left with a fancy headgear which costs twenty-one-grand but sounds similar to a headphone that retails for less than a tenth of its price.

While we’re on the topic of battery, let’s discuss the mileage we got out of the Zik. Parrot claims that their headphone can last up to six hours on single full charge, but didn’t give the specifics of the testing environment that the headphone were in when it achieved such feat. During our time with the Zik, the headphone’s battery held up to its maker’s claim. On our first test, with all of its features enabled and the volume cranked to its max, the Zik lasted for a little less than seven hours.

We were able to extend our mileage quite a bit by turning off some of the features like the noise cancelling and lowering down the volume. In doing so, we managed to squeeze in around 9-10 hours of battery on a single full charge.

Another great addition to the Zik’s feature set is the free-to-download app called Parrot Audio Suite. Not only does this app complements the Zik as a whole, but also expands its functionality by allowing users to tweak the sound to their liking. 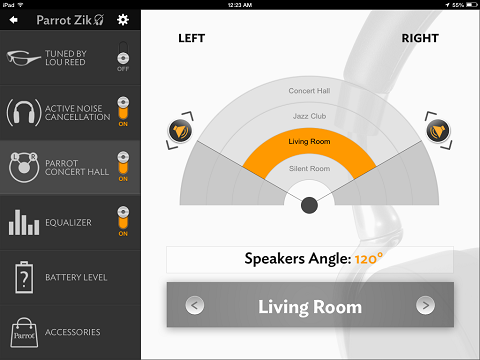 This includes manipulating the equalizer settings, as well as giving users the freedom to select the virtual angle of the speakers which would yield the best possible listening experience.

We know that shelling out a few grand on a decent audio device is tough pill to swallow for most consumers, let alone spending Php21,000 for a fancy wireless headset. However, for those who can afford it, we feel that the Parrot Zik has all the right tools to justify its premium price tag.

It has great looks, durable construction, above average sound quality and sports a plethora of features you wouldn’t see even on high-end headphones. Despite of a few minor drawbacks that we found on the Parrot Zik, we still feel that it managed to negate most, if not all of them, because of its great overall performance.

What we did not like:
* More cushion on the underside of the headband would’ve been nice
* Poor audio quality without batteries
* Can’t disable/enable features without the app
* Non-collapsible design
* Doesn’t come with a hard carrying case
* Gold/White model easily turns to Gold/Gray
* Proprietary batteries
* Can’t pair more than two devices
* No Bluetooth aptX support
* Quite expensive

The Parrot Zik is available in Pismo Digital Life Concept Store at the East Wing of Shanri-la, EDSA. It’s available in black/bronze, black/silver, white/silver and white/gold.