Phonepad+ turns your Galaxy S3 to a 10-inch tablet

Phonepad+ turns your Galaxy S3 to a 10-inch tablet

When ASUS released the first PadFone, we thought that it’s only gonna be a matter of time before other manufacturers join on the act. Well, the Phonepad+ for Samsung Galaxy S3 isn’t exactly a direct competitor to the PadFone, it follows the same principle of turning a handset in to a tablet and more.

The Phonepad+ is basically a docking station with a 10.1-inch touchscreen display and a built-in battery that is said to extend the handset’s mileage by another 8 hours. The cool thing about it is that users are not limited to this clamshell format as the LCD screen can be swiveled to the other direction or slid down to form a chunky slate.

For the gamers out there, you’ll be glad to know that the Phonepad+ will also come with a free Playstation-inspired wireless controller that pairs to your handset via Bluetooth. 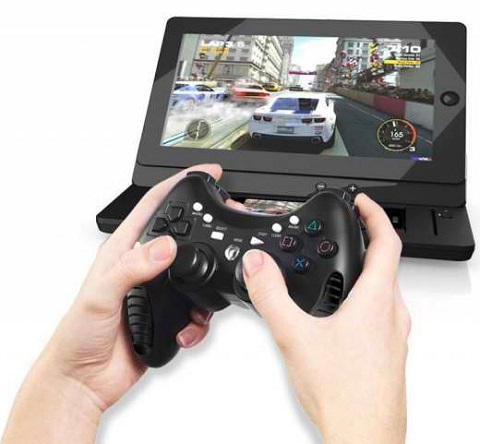 Being a fairly new device, the PhonePad+ still has some room for improvement in some aspects. Here’s our list of things we’d like to see on the next build:
• USB port/s (3.0 would be nice, but 2.0 would suffice)
• Bigger battery
• Better Screen resolution

The PhonePad+ is set to make its debut in UK this June and will retail for £149.99 a pop. Apart from the SGS3, the company behind this nifty accessory also come up with a version for its predecessor (SGS2) and is planning to release one for Sammy’s current flagship handset.