On Thursday, October 5, 2016, we were invited by DataBlitz and Capcom to an official presentation of Resident Evil 7 done by the game producer himself Masochika Kawata, where we had the chance to play through the all new Lantern Demo and we were also able to ask a couple of questions. 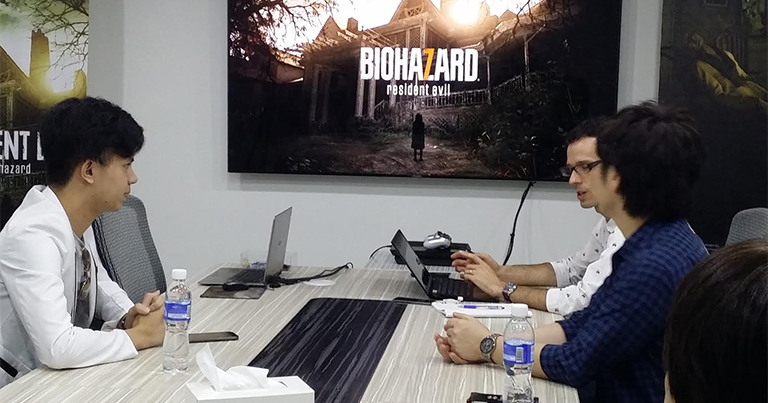 Resident Evil 7 is, well, the seventh game in the core series, a game franchise which has been well known for its ignition of the survival horror genre with the original Resident Evil. A game about survival, zombies, viruses, claustrophobia, and more recently, guns and action is having the biggest turn in its history with the seventh installment, which is why there is a lot of hype surrounding the game among RE fans and horror game genre fans.

But to kick things off, the presentation started with a lot of bullet points that should set the tone of game. We were told that that Resident Evil 7 will focus on escape, immersion & pursuit.

These words in themselves already answer a lot of questions as to what the game will be like. It is strongly hinted that the protagonist has no other main objective but to escape the terrors that will be in the game, and that you’ll be, for the most part, alone and being chased by terrifying creatures and the Baker Family. You’re not there to investigate for anyone. You’re not there to rescue the president’s daughter. No terrorist attacks. You just have to escape and survive. 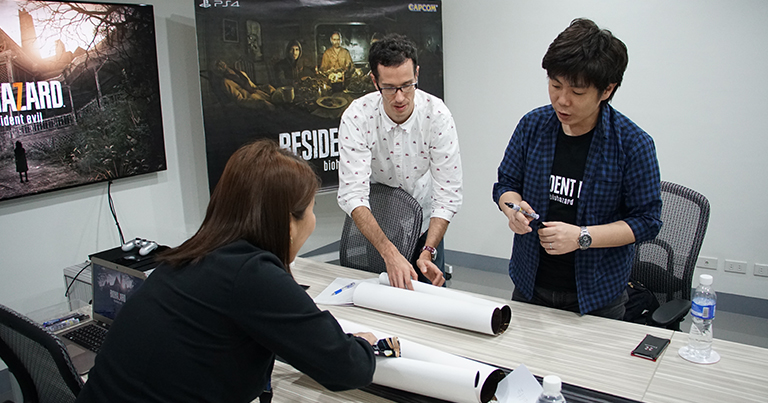 Will there be a Mercenaries Mode or any other Extra Mode with something similar like Tofu?

Resident Evil 7 is not supporting any online modes. So for example, with Resident Evil 5, we focused on cooperative online play, which as well-received. But the key concept of Resident Evil 7 is horror, so from the very beginning, we thought that playing alone will give the best horror experience.

Regarding items that are homages to previous Resident Evil titles, there is nothing that is as strong as [Tofu], but there are other items such as Herbs that if you have played RE games in the past, you’ll know how it’s used.

Will there be combat with multiple enemies, as the trailers and demos have only shown one on one confrontations?

What’s the previous game that had the most influence with RE7?

Resident Evil 1, not the remake, because it was the first time that they were making something, so we’re capturing that same feeling. For example, when you remake something, the main goal is to refine it, to build on what’s there. For RE1, it’s about making something new.

Should we expect to see the changes here for future titles like the First Person Perspective?

It really depends on the goals of the title. We’ll definitely look at not only what future titles need, but also how fans accept this move, so if it’s popular with them, we’ll probably keep using it.

Will this be an open-ended exploration game or will it have chapters with auto-save points?

The game is a linear experience, meaning not that there’s only one way through, rather it takes place in a linear timeline, so it’s not divided into chapters. However, as far as saving is concerned, there’s an auto-save system, so if you die you can restart not as far back. There will also be rooms to act as  manual save points. Just to note, depending on the difficulty situation that you choose, the saving system also varies. If you choose a harder difficulty, the saving system won’t be so nice to you.

What will the series be doing to separate itself from other titles out there in the same genre?

One key element is the Resident Evil universe of 20 years, so this takes place after Resident Evil 6. It may feel that it has changed a lot, but those things important to Resident Evil are there, and the fans of Resident Evil continue to look forward to experience the RE universe.

Will RE7 be expanding on plots left open by games like RE6 and Revelations 2? How does the RE Universe fit into RE7?

Revelations is used as the name implies, to follow up a lot of story threads, so we do have that passing of taking stories from other games and answering them here, so it’s something that you can expect from this game, we just can’t say what that is right now.

Will there be another demo or update? As Lantern is for horror, what about the other aspects of the game?

We do plan to update the demo on PSN for the players to experience the other aspects of the game. We don’t have a fixed date [for the release], but it will definitely be out before the game comes out.

Will the demo be available for other platforms?

Yes, we’d like to have it on other platforms as well.

Will the RE Engine make its way to other titles, Capcom games and even handheld, or will that be exclusive to the RE games?

The RE Engine is actually applicable to any game you wanna use it to. However, it’s specifically designed for high-end capabilities, so it’s probably not meant for mobile.

One last thing: Tell us something about the RE2 Remake or the idea of an Outbreak Remake.

There’s a separate producer for RE Remake 2, who is hard at work right now. All that we can say is we hope that we’d have information to share soon.

Creating the original Outbreak was a huge task for Capcom. It was a unique game with online and other elements like that. In order to make a successor to that, it would require a lot of planning from Capcom to get it right. However, we’re also always listening to what fans want, so that can be the impetus for us to making a successor for that title.

Resident Evil 7 is coming out on January 2017, but the demo Beginning Hour is already available on PSN for free. Feel free to give it a try, and surely, once the game releases, you will be able to find it at DataBlitz.