It has recently been rumored that Apple will be unveiling the iPad Mini on the 23rd of this month. In line with this speculations, Mobilegeeks.de released a snapshot of rumored tablet’s pricing scheme a week ahead of the alleged launch.

According to the leaked image, the upcoming tablet is said to be available in white and black, and comes in 8GB, 16GB, 32GB and 64GB variant. And much like its bigger counterpart, consumers will be given an option to get the iPad Mini with 3G connectivity or the WiFi only version. 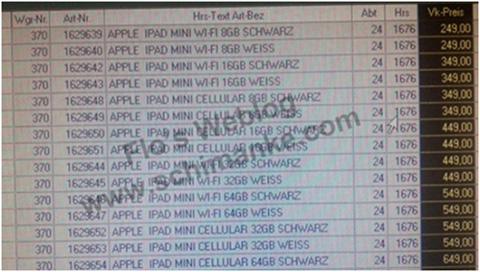 This is not surprising since Apple has been known for their overpriced gizmos. If this pricing is to be believed, will you still go with the iPad Mini or would you rather wait for the revamped version of the Nexus 7?