One of the devices Apple unveiled a couple of months ago was the 5th generation iPod Touch. It is better-looking and more powerful than its predecessor. Some say it’s the iPhone without the phone. Find out more by reading our full review after the break. 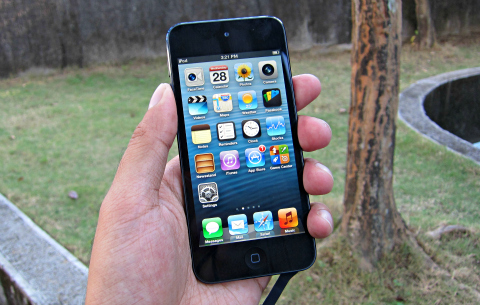 The iPod Touch 5th Gen is hands-down, a sleek looking piece. Its body is made of anodized aluminum which is the same material used for the iPhone 5 and the iPad Mini. The front is mounted with glass that coveres the 4-inch display and the 1.2 megapixel FaceTime HD camera while down below is the famous home button. On the left side are the volume buttons while the right side is devoid of any buttons. Right on top is the lock button while at the bottom are the headset jack, Lightning port and speaker. Flip it on its back and you’ll find the 5 megapixel camera with flash and a microphone in between, a provision for a wrist strap and a black patch that covers iPod Touch’s WiFi and Bluetooth radio. Apple’s designers and engineers were really thoughtful in making the iPod Touch 5th Gen. Compared to the iPod Touch 4th Gen, the entire body was remodeled to make it more friendly to the hands. Gone were the tapered sides found on the iPT4 and decided to go for a more rounded design to make it easier for a user to press the volume and lock buttons. The edge surrounding the bezel is chamfered with glossy glass-like finish. This makes the iPT5 easier to grip and more aesthetically pleasing.

It is also lighter and thinner than the iPT4 and thanks to the larger display it is also taller. The added height is more of an advantage since your hands will receive more surface area so you can hold it better. But because it is so light and thin you’ll still get a feeling that it’ll slip from your hands if you’re not careful. Apple designers probably have felt the same way and decided to include a provision for a wrist strap to prevent accidental slips. True enough, the wrist strap saved the iPT5 from falling a lot of times in my two weeks of use. As for the wrist strap itself, it’s made of synthetic leather and is quite durable. I did quick pulls and minor stretching on the strap and it didn’t show any quick sign of wear and tear. 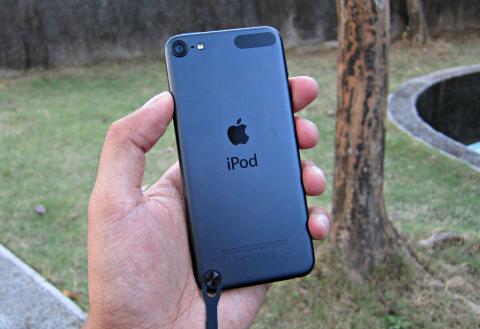 As for the anodized aluminum body, it made the device tougher and more resistant to light scratches compared to previous iPT models. I tried scratching it with my fingernail and it didn’t leave a mark. However it’ll surely won’t resist scratches from other hard materials like keys and other sharp objects. And no, I didn’t and would never try doing a scratch test on this device (you can check YouTube for those) and I highly suggest buying a protective case as a precaution. Although resistant to light scratches it is still prone to smudges and fingerprints. I have sweaty hands so I find myself wiping it every now and then. Another irk is the surrounding edge on the black patch where the wireless radios are. Somehow it collects tiny bits of grime and dirt. It’s not that noticeable but once you see it it certainly looks dirty. But overall, the 5th generation iPod Touch has an outstanding design and high-quality build.

The iPT5 has a 4-inch “Retina” IPS display with a resolution of 1136 x 640 which calculates to 326 ppi. It has the same LCD panel as the iPhone 5 so icons look like they’re floating on top of the glass and it is clearer and more vibrant too. In fact, the display on the iPT5 is even better compared to the one on the iPhone 4S. The display also has an aspect ratio of 16:9 so movies and games look great on it. Viewing angles are excellent with good sunlight legibility. However, you might want to crank up your brightness in Settings as this device doesn’t have an ambient light sensor, meaning there’s no Auto-Brightness feature. Why? According to Apple’s VP for worldwide marketing, Philip Schiller, the iPT5 is so thin that a light sensor just won’t fit. The interior is so cramped that Apple engineers just have to let it go.

The iPT5 has iOS 6 running out of the box. I had the 6.0.1 update installed right away to remove some of the bugs. Everything else is pretty much standard except for the taller UI. You can now browse more content online and view media in a much larger perspective. You also get the 4 x 5 app grid instead of the usual 4 x 4. To speed you up on things you can read our overview on iOS 6 here. 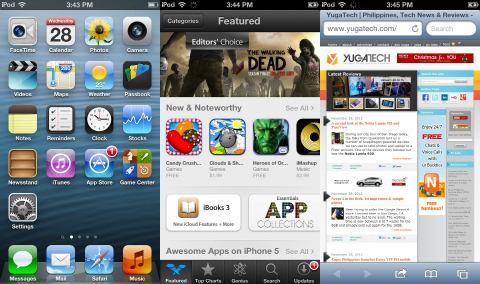 Apps are not an issue anymore as developers are quick to optimize their apps for iPhone 5 and the iPT5’s taller display. In fact, I don’t see any letter-boxing in any of the apps I have installed.

This is one of the areas where the iPod Touch receive a sizable upgrade. From a 0.7 megapixel on the iPod Touch 4th gen, it now has a 5 megapixel iSight camera with flash and an aperture of f/2.4 with auto-focus. It also has backside illumination, touch-focus, and can shoot HDR and Panorama. Shots taken indoors with abundant lighting produce clear images with good amount of detail. Shots taken outdoors are also clear but somehow appear washed-out. In low-light, the flash works best when the subject is three to four feet away. Any further than that and image noise will be evident.

As for the front facing camera, at 1.2 megapixel it is obviously better than the one found on the iPT4. It’s good for FaceTime HD and Skype video calls and some decent self-portrait shots.

Take a look at the sample pics taken by the rear camera below:

The iPT5 can also record videos at 1080p resolution at 30 fps with video stabilization. Watch the sample video below and don’t forget to switch it to 1080p.

Like what was mentioned earlier, playing videos and games on the iPT5 is a treat thanks to a larger and high resolution display. Sounds coming from the speaker are audible but a bit weak to my preference. Placing it on a flat solid surface amplifies the sound a bit but I still recommend using a good pair of headphones or external speakers.

The iPT5 is powered a dual-core ARM Cortex A9-based Apple A5 processor clocked at 800 MHz, the same processor found in the iPhone 4S. It has 512 MB of RAM and a PowerVR SGX543MP2 GPU. Gaming performance is way better than the previous iPod Touch and in my opinion is up to par with the iPhone 4S. 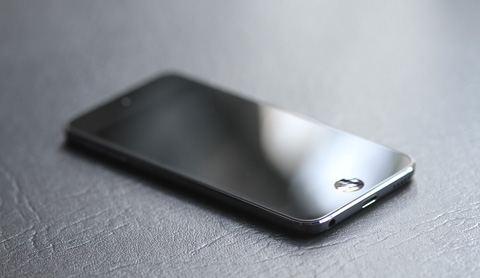 It is also equipped with a 1,030 mAh battery which Apple claims 40 hours of music playback and 8 hours of video. In my use which is constant WiFi connectivity, social media, web browsing and a few hours playing music, the iPod Touch lasted almost a full day. The only time the battery suffers is when I play games and movies. With that usage the battery only lasted for 4 hours.

As for connectivity, the iPT5 doesn’t have an on-board GPS so that’s a bit of a downer but good for battery life. However, you get a dual-band WiFi radio and Bluetooth 4.0.

Calling previous iPod Touches as iPhones without the phone part is an exaggeration. The iPT5 is more worthy of that statement thanks to its high-quality build, excellent design, amazing display and a very capable camera. With that said it’s easy to sum up its capabilities – the 5th generation iPod Touch is the REAL iPhone without the phone functionality. If you want to take advantage of iOS and the App Store but not ready for a full iPhone experience, I definitely recommend getting this.

What we didn’t like about it:
• So-so battery life
• No ambient light sensor
• Smudge and fingerprint magnet