It has been long rumored that Apple may incorporate a fingerprint sensor on the next iPhone. And while the tech giant has yet to formally confirm the existence of such feature, there may have been some truth behind these hear-says as suggested by the latest Beta release of iOS 7 which was recently made available to devs. 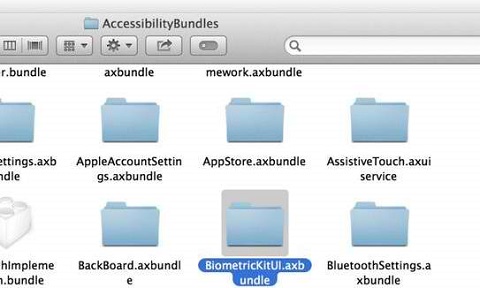 Found among the heap of folders in the iOS 7 Beta 4 is a sub-folder referred to as BiometricKitUI.axbundle. Inside it is a string of commands (seen below) that details the process of enrolling a fingerprint to the handset’s database (or at least that’s how we interpreted the string).

Another evidence which suggests that Apple is indeed looking to include biometric scanner in their future endeavors is the $356-million acquisition of AuthenTec early last year, followed by a recent patent application to formalize the inclusion of a fingerprint sensor technology on their upcoming device/s.

But even with all of these leads, we still can’t definitively expect such feature to be included in the next iPhone, or any iDevice for that matter. Therefore, it pays to take this matter lightly so as to not be disappointed in the end. However, if this materializes, we can probably expect to hear Phil Schiller’s infamous statement again during the iPhone’s launch.