Jeepney Company, the company behind Jeepney Tours that offers tourists with Pinoy-style transport in some of the top destinations in the country since 2005, have recently showcased the double-decker Jeepney complete with airconditioning system, a refrigerator, a pair of TV, sound system and two microphones for those who fancy videoke while on the road. 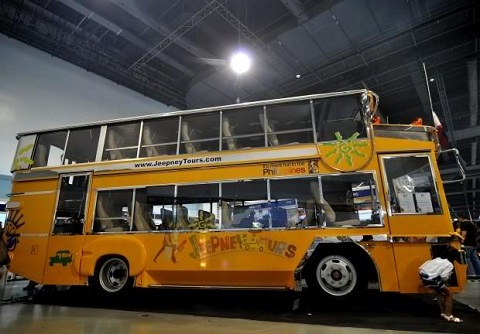 Back in September last year the Jeepney Company, together with Tourism Secretary Ramon Jimenez Jr., showed attendees of Philippine Travel Mart 2013 a scale drawing of the proposed double-decker jeepney. A year later, a prototype was unveiled at SMX Convention Center for the 25th Philippine Travel Mart and is expected to make its maiden voyage on October.

The company has already started taking reservations for the double-decker jeepney who will take tourists to top destinations around the metro. According to Philippine Daily Inquirer, renting the pimped-out jeepney for eight hours will set prospective customers back Php11,000 – Php18,000.