Yesterday we’ve reported on Nissan’s collaboration with Sony, and Polyphony Digital to put up GT Academy that aims to turn gamers into real-life race car drivers. It was officially announced in Makati City and the company’s executives are urging Filipino gamers to participate and take a shot at being a superstar on the tracks. Interested to join? Then check these 10 frequently asked questions to give you a clearer understanding of what it’s about and what you need to do:

GT Academy was originally only run as a pan-European contest, but as the programme’s popularity has grown a new series in the USA and a specific German competition has begun. The program continues to expand as it now has the GT Academy Asia having Philippines and other Asian countries including Japan as participating countries.

2. Which countries participate in GT Academy?

GT Academy was originally only run as a pan-European contest, but as the programme’s popularity has grown a new series in the USA and a specific German competition has begun. The program continues to expand as it now has the GT Academy Asia having Philippines and other Asian countries including Japan as participating countries.

Everyone is invited to participate in the Live Events and simulate a real race car driving experience using the GTA pods.

However, the 20 finalists who garnered the fastest lap times in the Live Events will have to abide by the following eligibility criteria:

Nissan will hold Live Events in various locations nationwide in the Philippines starting April 10, 2015. The 20 fastest and qualified gamers at the event will go through to the next stage of the competition which is the National Finals happening in July 2015.

5. Is it worth entering GT Academy even if I don’t think I’ll win?

It is always worth trying to see where you are against the best gamers in your country. None of our previous GT Academy winners believed they had a chance of winning when they first entered GT Academy! But you can also have a lot of fun by challenging your PSN friends. The GT Academy competition is also designed to improve your skills.

6. What are the timings for the other stages of GT Academy Asia 2015?

7. What happens next to the winner of GT Academy?

The winner has to be prepared to make a major commitment to becoming a real racing driver. From the end of the Race Camp, the winner will be based in the UK for approximately three months in order to undertake an intensive race training programme. The winner will be housed close to Silverstone Circuit and will be racing in UK national and club level races most weekends.

The overall winners of GT Academy will be put through an intensive Driver Development Programme, in order to qualify for the main prize – a chance to race professionally with Nissan in Dubai and potentially beyond, dependent on the winners own abilities and commitment to the programme.

8. What if a competitor has never raced a real car in their life?

That’s not a problem. GT Academy is about finding the best of the best Gran Turismo gamer and turning him or her into a professional racing driver. As outlined in the rules, people with past professional racing experience are not eligible. As long as the competitor can drive in Gran Turismo, knows how to drive a real car, and meets the other eligibility requirements, all they have to do is try their best.

9. Can a GT Academy graduate be a realistic route into top-level motor sport?

Nissan and PlayStation posed the question – “can the world of virtual racing unearth a real racing talent?” The success of the competition’s previous GT Academy winners has demonstrated that this answer is a resounding “yes”. It was clearly demonstrated when Lucas Ordoñez, the Spanish winner of the first installment in 2008, went on to finish second in the Le Mans 24 Hour race in 2011 and won the Intercontinental Le Mans Cup for Nissan.

To know more about the program and for updates on the program, you can visit Nissan Philippines, Incorporated’s Facebook Page. 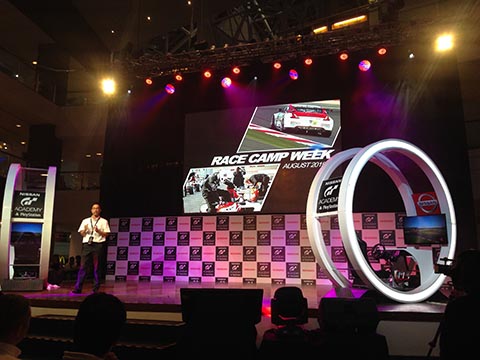 Below is a more detailed skeleton or outline to becoming a pro racer:

Thousands of hopefuls will be narrowed down to the top 20 gamers to be determined by time trials taking place behind the wheel of GT pods during live racing events.

The National Finals will determine top 6 Filipino players who will go to the next round and go bumper-to-bumper with the best Gran Turismo drivers in Asia.

Players will be tested on their strength, stamina, mental agility and driving skills against Asia’s best at the Silverstone Racing Circuit in UK.

The emerging GT Academy Champion in Asia will join other GT Academy winners in a rigorous training under the wing of professional coaches and racers at the Silverstone Racing Circuit in UK.

After passing the Driver Development Program, graduates will receive their International C License, allowing them to compete in a prestigious racing event anywhere in the world.