Cherry Mobile recently launched one of its newest affordable devices, the Flare Y7 Pro. Similarly, Xiaomi also released its entry-level Redmi 7A in the country. See how these two budget smartphones battle it out in specs in this comparison article. Read on! 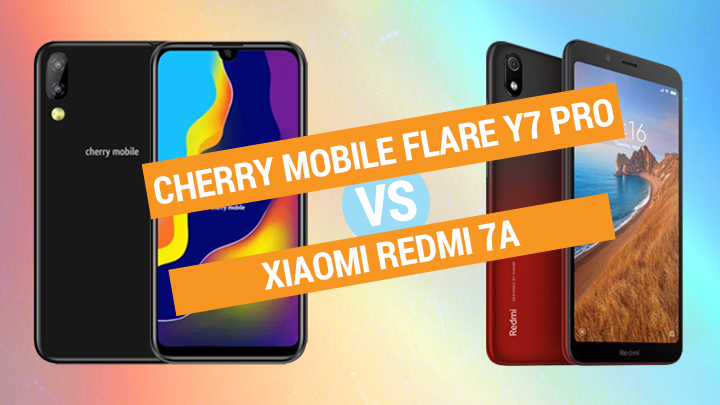 In the display aspect, the Y7 Pro edges out the 7A with its larger 5.7-inch display that carries a 1520 x 720-pixel resolution. The 7A has the smaller panel at 5.45-inches and a 1440 x 720 resolution. Both smartphones also have an HD+ display. The Y7 Pro has the better design among the two, as it has a drop notch and slimmer bezels while the 7A has an outdated look with thick, full bezels occupying the top and bottom of the screen.

MediaTek Helio A22 powers up the Y7 Pro, while Qualcomm Snapdragon 439 provides the performance for the 7A. Both the A22 and SD 439 are budget chipsets, but the SD 439 trumps over by being an octa-core processor, as opposed to the A22 as a quad-core processor. The Y7 Pro does have the bigger RAM at 4GB though, in contrast to the 7A’s 2GB RAM. Still, both devices will be able to handle basic tasks.

Storage-wise, the 7A has a base of 16GB and a larger offering at 32GB, while the Y7 Pro has a single offering of 32GB. The capacities are pretty much expected given that they’re both in the budget segment. Both the Y7 Pro and 7A do offer storage expansion up to 256GB via micro SD.

When it comes to cameras, the Y7 Pro has the upper hand with its 16MP front snapper and 16MP + 2MP dual rear shooter setup. On the other hand, the 7A has a single 12MP rear camera and a 5MP front camera. We’ve yet to see the photo quality from both smartphones, however exactly.

In the biometrics department, the 7A only offers face recognition, while the Y7 Pro not only has facial recognition, but also a side-mounted fingerprint scanner. We want to give this round to the Y7 Pro for offering more security to its users. Audio lovers can rejoice as the two devices possess a 3.5mm audio port.

Cop the Flare Y7 Pro if you’re opting for a modern design, larger screen, bigger RAM + storage combination out of the box, more biometrics options, and dual rear cameras. If you’re not one for smartphone designs and would like a device with a slightly smaller footprint, two storage offers, a bigger battery, and its user interface, get the Redmi 7A.

What do you guys think? Share it with us in the comments.

Had nightmares with cherry mobile